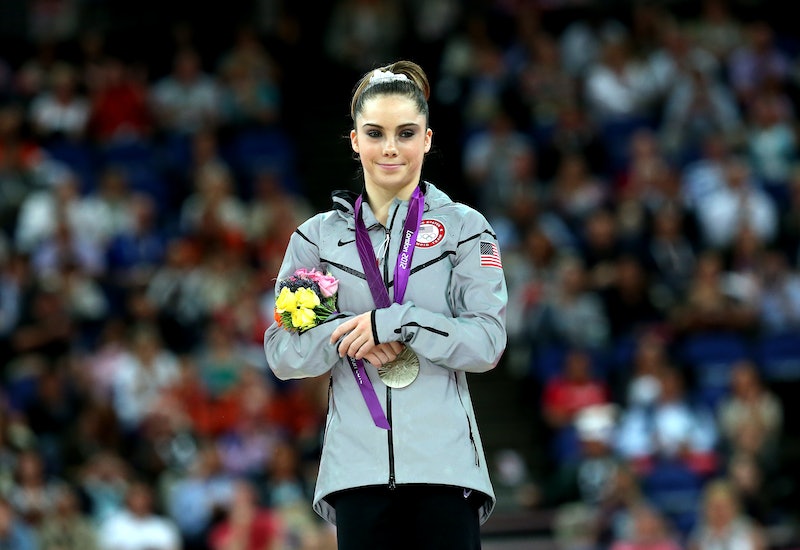 Every four years, stars are made at the Olympics. In 2012, those stars were clearly the Fierce Five, aka the U.S. women’s gymnastics team. They absolutely rocked their competition, winning the gold medal with relative ease. While every team member pulled her weight, McKayla Maroney’s iconic vault was one of the events that put Team USA over the edge. The face Maroney would later make as she accepted a silver medal for the solo vault event quickly became a meme, making her even more of a star, but her impact on the women’s gymnastics program is forever (as is that picture). Unfortunately, she's not competing this year, but I need to know if McKayla Maroney is watching the 2016 Rio Olympics along with the rest of us — and maybe even making some more memorable faces.

According to USA Today, Maroney confirmed in February 2016 that she was done with her competitive career. It was kind of assumed, since she hadn’t competed since the 2013 world championships (where she won first place in vault), but she told GymCastic in a video interview, “You have to be so passionate and so in love with gymnastics to be able to get to the Olympics. When you start losing even just an ounce of that, I was like I’m not going to make it. I’m not.” Good on Maroney for knowing when to stop — there’s no shame in quitting while you’re ahead, and she certainly has the medals to prove it. I mean, let's just watch the vault heard 'round the world again.

Though Maroney has moved on from competitive gymnastics, it doesn’t mean her former teammates have — both Gabby Douglas and Aly Raisman are competing again, and according to Maroney’s Twitter, she's ready to watch the 2016 games in Rio.

The women's gymnastics qualifiers took place on Aug. 7, and Team USA absolutely crushed it. Maroney was cheering for her teammates and answering fan questions about what it's like to watch and not be there in Rio:

But Maroney will be doing more than watching the 2016 Olympics after all, as she revealed on Twitter that she's going to be on Good Morning America from Aug. 9 to 12 to talk gymnastics and Team USA.

This could be a great way for Maroney to evolve her gymnastics career from competing to commentating. That's what a lot of popular athletes do, including fellow former gymnast Nastia Liukin, who can also be seen on NBC. Maroney is not only charismatic and fun enough to do the same, but she obviously knows plenty about the technical aspects of the sport. It says on her Twitter profile that she's a "recording artist" and that "music is on the way," but if she ever abandons her singing plans, there's definitely room for her on sport television.

More like this
What Is Jeanie Buss' Net Worth? The Lakers President Is Uber Rich
By Hugh McIntyre
Jake Daniels Just Became The UK’s First Active Football Player To Come Out As Gay Since 1990
By Sam Ramsden
Penn Badgley & Leighton Meester Met On A Horror Movie Set Before 'Gossip Girl'
By Jake Viswanath
50 Years After Creating Her Alter Ego, Angelyne Is Still Driving That Pink Convertible
By Gretchen Smail
Get Even More From Bustle — Sign Up For The Newsletter