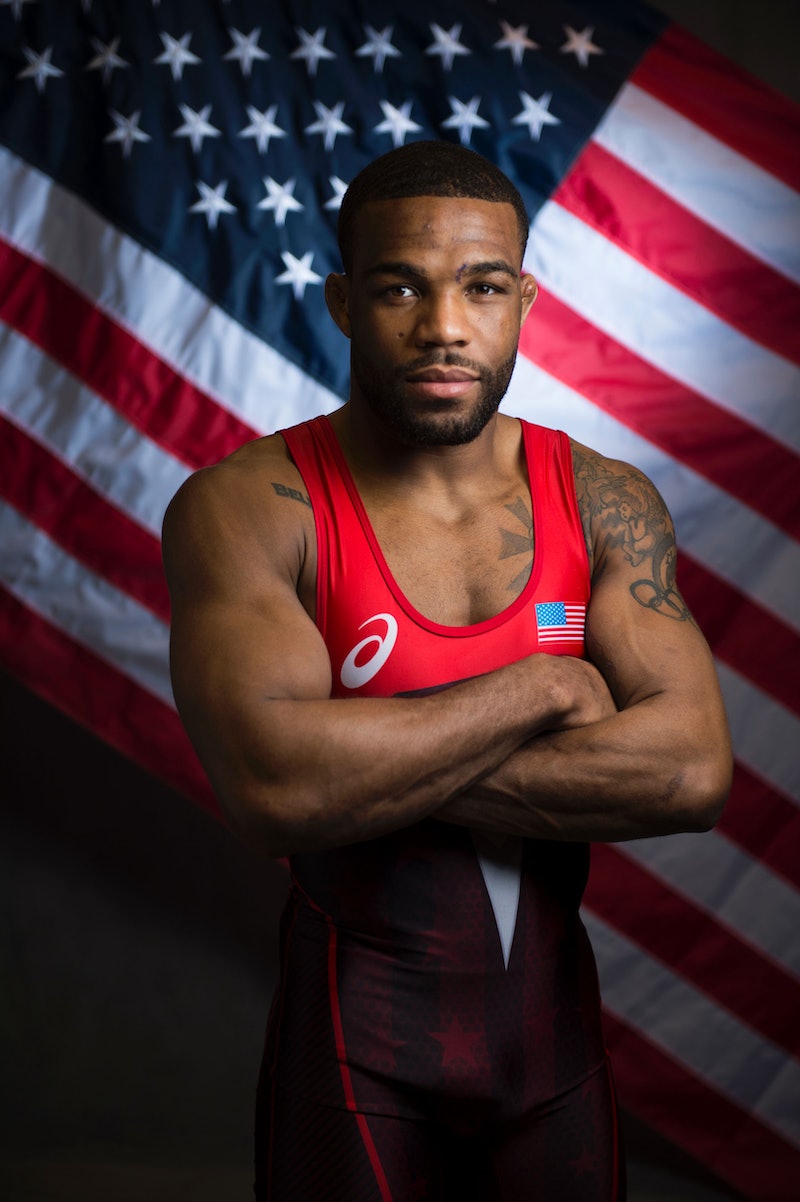 It's hard to believe that it's already been four years since the 2012 games in London, but the 2016 Olympics are in full swing in Rio. Later this month, the wrestling competitions will begin, and if you ask me, Jordan Burroughs is about to kill it. Feel free to disagree, but the facts make it pretty clear. Not only did he win a gold medal in the last Olympics, but according to his official website, he's also won four world championships and 22 international championships, so yeah, his competition should be scared. And not only is Burroughs incredibly talented, but he's also pretty easy on the eyes, too. So is Jordan Burroughs single? I have bad news for you if you're hoping he is!

Unfortunately for those of us who are currently crushing on this awesome athlete, Burroughs is taken and has been for awhile now. Actually, Burroughs has been married to Lauren Mariacher since 2013 and together, they have two children — a two-year-old son named Beacon and a daughter, Ora, who was born earlier this summer. And after seeing photos of the family together, it's hard to be bitter about his relationship status. I mean, look how adorable they all are!

And although the fact that Burroughs is a gold medalist is tough to beat, Mariacher is pretty impressive in her own right. She graduated from Columbia University in 2009 before becoming a news and sports reporter for the Buffalo News, which was a job she held until right before their wedding. And the story of how she and Burroughs met is actually pretty sweet. According to what they wrote on their wedding website, here's what happened:

One day she went to a wrestling tournament in Philadelphia — the 2011 NCAA Championships to be exact. Lauren was there to watch her brother Matty compete for American University, but there was another wrestler there that weekend that would catch her attention. A young stallion named Jordan. Jordan just so happened to be wrestling on the mat located directly in front of the section of the stands where her and her family were seated. As she peered down to the mat, she thought, "Is this a dream?" He was beautiful, ripped, and confident. She requested him on Facebook when she arrived home, and he thought to himself, "Wow, a good looking wrestling fan!" He messaged her, and they began chatting. A few months later, Jordan agreed to teach a wrestling clinic in the area and asked Lauren if she would like to meet him. Of course, she obliged.

OK, how cute is that?! It sounds like these two are definitely meant to be. I can't wait to see Mariacher cheering for Burroughs in the stands with her little ones, just like she said she'd be, in just a couple of weeks!