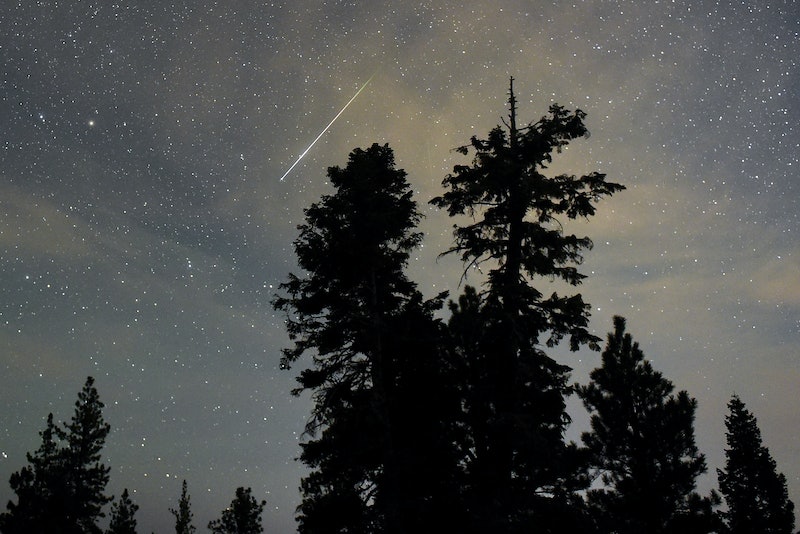 If you're a big fan of checking out gorgeous astronomy, I'm willing to bet you've been looking forward to the Perseid meteor shower for a while now. And if you've been wondering exactly when the Perseid meteor shower is, luckily, it's right around the corner! The 2016 Perseids will peak on Aug. 11 and 12, with best views being a little after midnight. What's more, they're definitely going to be worth staying up late for this year; apparently they're going to be the most spectacular they've been in a long, long time.

What exactly does it mean that the meteors are going to peak on Aug. 11 and 12? Just to be clear, we're talking about the absolute best time to view the Perseid meteor shower: That is, the evening of Thursday, Aug. 11 into the wee hours of the morning on Friday, Aug. 12. According to Astronomy.com, the viewing should be especially good after midnight because "the waxing gibbous Moon sets around 1 a.m. local daylight time." From there, the shower generally looks better as dawn approaches because the shower's radiant (the spot where meteors appear to come from) climbs higher.

One of the super nice things about the Perseid meteor shower is that you don't actually need a telescope or any fancy equipment to view it. If you're in an area with a black sky and open space, you should be all set to simply sit back on the grass and look up. Once the meteor shower begins, you'll see the meteors flying across the sky at a rate of about one meteor per minute, according to Phil Plait at Slate.

Interestingly, though, many researchers think there will actually be an uptake in activity this year, causing us to see more meteors than usual. According to Bill Cooke of NASA’s Meteoroid Environments Office "Forecasters are predicting a Perseid outburst this year with double normal rates on the night of Aug. 11-12." This means that in perfect conditions, you could see as many as 200 meteors per hour, or three to four per minute. Pretty amazing, right?

If you aren't able to get outside to watch the Perseid meteor shower, you can always catch it on a livestream or watch a recording of it afterwards. Many people love watching the Perseids, though, because so many people have time off during August. The warm weather, too, feels inviting and relaxing to be outdoors. Personally, I think watching a meteor shower is a great, free way to spend time with your friends or take someone on a romantic date. And if you're not already an astronomy buff, worry not! It's nothing a little internet research can't fix.

More like this
The 6 Best Air Conditioner Alternatives
By Vanessa Spilios
What To Know About Taking More Than 1 Piriteze Per Day
By Bustle UK
TikTok's Favorite Bartender Thinks Mimosas & Bloody Marys Are Out For Brunch
By Alexis Morillo
Are We Drinking Rosé All Wrong?
By Sheila Yasmin Marikar
Get Even More From Bustle — Sign Up For The Newsletter