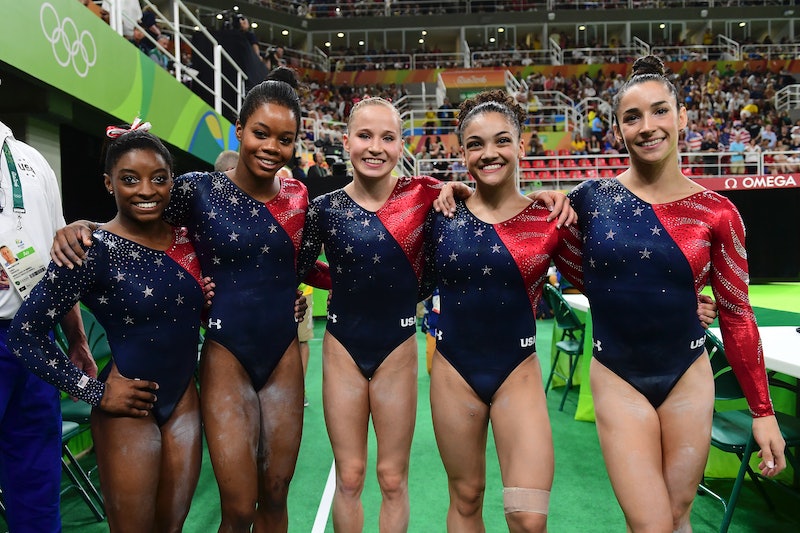 It makes sense that there would be some serious competition and tension in the Olympic gym, especially when competing for the top two spots in the women's gymnastics all-around qualifications. But for Aly Raisman and Gabby Douglas — who are once again teammates in Rio, just as they were in London in 2012 — their friendship dominates any potential rivalry, and their support for one another (as well as the rest of their Team USA teammates), is one of the things that makes women's gymnastics so entirely impressive.

On Sunday, Douglas was shut out of defending her Olympic all-around gold medal, coming in third in the all-around qualifications as her teammates Simone Biles and Raisman scored the coveted first and second places, respectively (only two members from each country can compete in the all-around). While the competition was certainly stiff — Raisman beat Douglas by "less than half a point," the Associated Press notes — it was Douglas' reaction to her teammate nailing her beam routine (one that meant Douglas would most likely not be contending) that certainly said it all: Like she and the rest of her teammates had been doing throughout the day, Douglas immediately enveloped Raisman in a congratulatory hug.

And that's exactly what is so incredible about the Olympian athletes' friendship: It can be gut-wrenching, to say the least, to watch your friend and teammate edge you out of the competition — but their support for one another is unwavering, and their friendship is one that transcends any kind of rivalry.

After all, Douglas and Raisman have been through it all together: For one, they're the two returning Olympians on the team, having competed (and won gold) at the 2012 Olympics. So not only do they have the ~bonding experience~ of being teammates at one Olympics, they're also in the midst of doing it all over again. Plus, there are literally years' worth of gymnastics competitions and events in between — ones that admittedly woodwork fans like me don't even know the half of — during which the athletes have undoubtedly bonded:

In addition to their time spent in the gym, Douglas and Raisman have also logged many hours attending ~glamorous events~ together after London. Like when they joined their teammates on stage at the 2012 VMAs, or when they ditched the leos for some floor-length gowns and looked stunning AF at the 2013 Golden Globes after party:

Because nothing says friendship quite like flipping a table in order to meet Usain Bolt.

More like this
Jake Daniels Just Became The UK’s First Active Football Player To Come Out As Gay Since 1990
By Sam Ramsden
What Is Jeanie Buss' Net Worth? The Lakers President Is Uber Rich
By Hugh McIntyre
How To Use Circle, Twitter’s Version Of Close Friends
By Emma Carey
Amy Schumer Is Actually The Other Kardashian Sister You Never Knew About
By Jake Viswanath
Get Even More From Bustle — Sign Up For The Newsletter