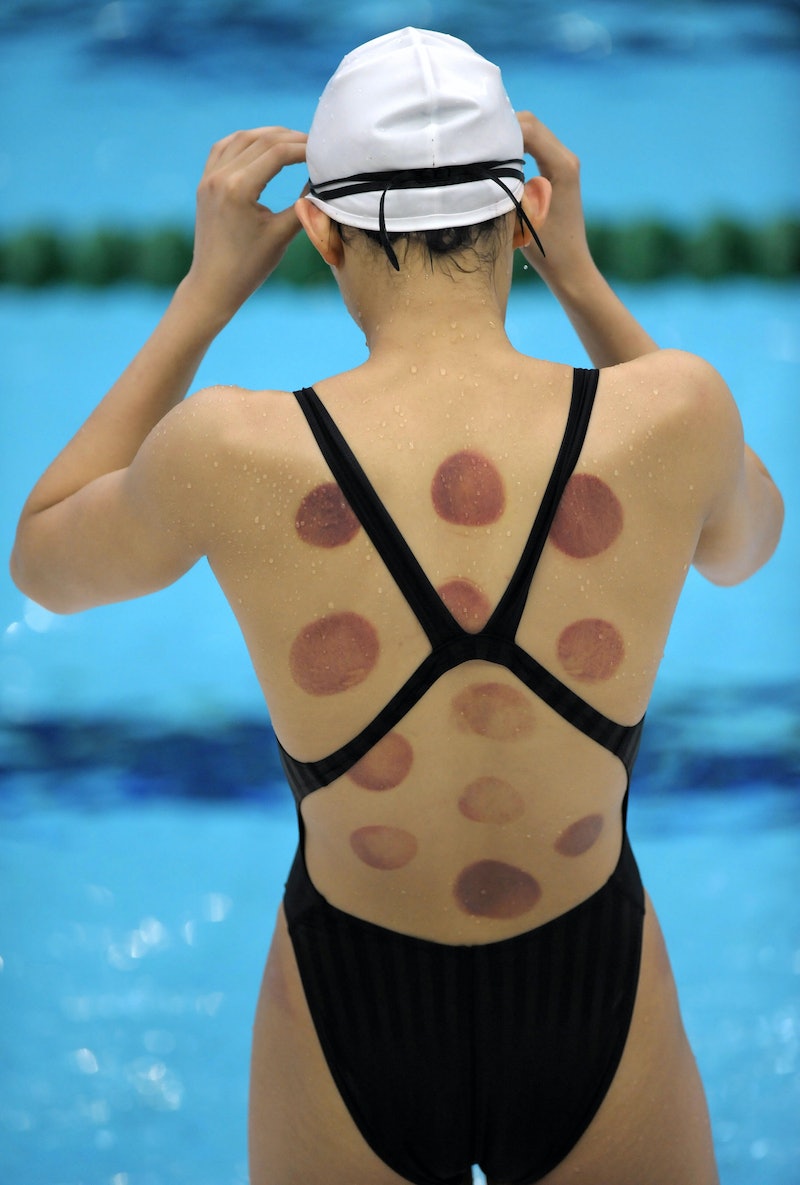 This weekend Olympic swimmer Michael Phelps made a ~splash~ when viewers saw the red-colored spots on his back, which many recognized immediately as the after effects of cupping. And while a lot of people have a vague idea of what that entails, a lot of us were wondering: what exactly is cupping, and what does it do?

What seems like a new relatively new idea to some is actually an ancient healing practice that may hark back as far as 3000 BC; it is even included in the Ebers Papyrus, the world's oldest known medical textbook, from 1500 BC. The practice involves suctioning localized parts of the skin, and is meant to mobilize blood flow to promote healing. In modern practice, cupping is considered an alternative medicine, and the cups involved in the suctioning can be made of glass, bamboo, or earthenware. Recently, though, some practicers have adopted silicone as well.

There are actually two types of cupping that practicers use today: dry cupping, which just involves suction, and wet cupping, which involves both suction and regulated medicinal bleeding. In both types, a flammable substance like alcohol is placed into the cup, where it is then set on fire. The cup is placed on the patients' skin as the flame goes out. But the images you see of the spots on Michael Phelps' back and the backs of other athletes in the Olympics aren't from burns. Rather, they're from the vacuum created in the cup that expands blood vessels, causing them to redden. After the cup has been in place for five to ten minutes, it is removed, leaving the characteristic marks that raised so many questions over the weekend.

So why exactly are athletes like Michael Phelps using the practice for, and does it yield actual results? Phelps seems to think so — the practice made his recent Under Armour ad spot for the Olympics, and he has posted Instagrams of himself mid-cupping. Many other athletes have adopted the practice, as well as celebrities like Jennifer Aniston, Gwyneth Paltrow, and Victoria Beckham, which is probably where you heard about it in the first place.

The British Cupping society cites many ailments that cupping can cure or help with, ranging from blood disorders to skin problems to mental health issues like anxiety and depression. But according to WEBMd, more research must be done to determine the effectiveness of cupping, as many researchers cite the placebo effect for its success — that is, when a patient feels better simply because they expect to feel better.

In any case, the practice is safe so long as it is not applied to an area where there is an ulcer or a prominent vein, or used on someone who is pregnant, has a fractured bone, or metastatic cancer. As for whether or not it will help the rest of the population earn themselves a gold medal like Phelps did this weekend? Still up for debate!