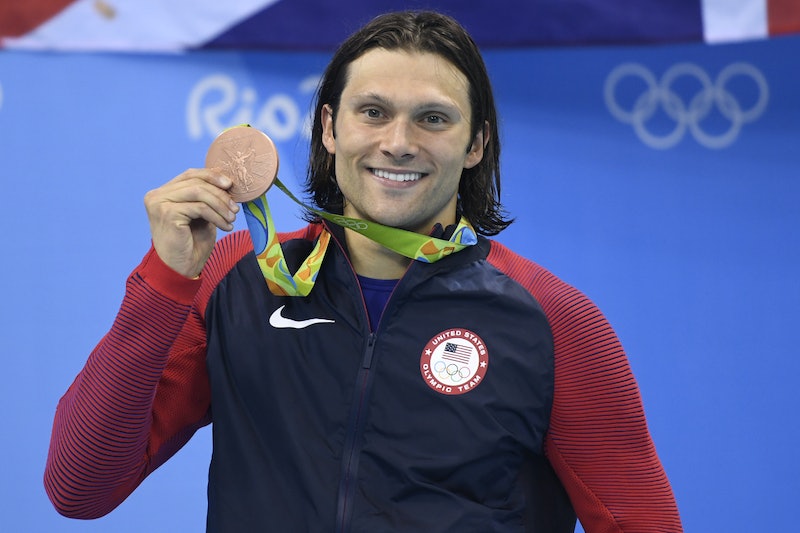 Well-functioning lungs are clearly an important part of being a swimmer, especially at the Olympic level. However, Cody Miller's lung condition, which decreases his lung capacity by as much as 20 percent, hasn't stopped the Team USA swimmer from getting to the Rio Olympics.

Miller, who is from Las Vegas, Nevada, qualified to participate in the 100m breaststroke competition at Rio. The 24-year-old swimmer, who lives in Bloomington, Indiana, wrote a post about his condition, called pectus excavatum, on Imgur after he officially beat the odds and qualified for Rio. "I am not a typical Olympic swimmer. Most swimmers are incredibly tall, well above 6ft... I'm 5'11 and only weigh 170lbs. More often than not, I'm the smallest person in the pool," Miller wrote in his July 3 post, which quickly went viral.

Miller's condition (or "deformity" as he referred to it in his post) appeared when he was around 10 years old. Though it definitely sounds like it, Miller insisted that pectus excavatum is not a Harry Potter spell. His condition puts his chest bones in a different placement than in most people, which significantly reduces his lung capacity. Miller explained more about the details of his condition on Imgur:

My condition puts stress on my respiratory system. Tests have shown that my sunken sternum and odd placement of other bones has caused a reduced lung capacity... To what extent is unknown. Doctors have said my maximum breathing capacity is likely reduced by 12-20%.

Surprisingly, Miller was also diagnosed with asthma in college. Although he wrote that it is not due to his lung condition, it inevitably adds to the challenges of being a swimmer. Miller also wrote that it has not always been easy for him to deal with the chest deformity that has formed because of his pectus excavatum:

Like a lot of you, I have struggled with body image problems through out my life. I struggled with my appearance from a young age. I was a kid who was afraid to take off his shirt in gym class... people thought I was weird. At swim meets, I walked around the pool deck awkwardly while people stared and pointed at me. I was weird and abnormal.

Despite his condition and the accompanying insecurities, Miller has dedicated his life to swimming, and he never gave up on his dreams. After qualifying for Rio, Miller won his first bronze medal and set records for himself that he probably thought were impossible, given his condition.

More like this
Jake Daniels Just Became The UK’s First Active Football Player To Come Out As Gay Since 1990
By Sam Ramsden
What Is Jeanie Buss' Net Worth? The Lakers President Is Uber Rich
By Hugh McIntyre
Michigan’s Governor Is “Going To Fight Like Hell” To Protect Abortion Access
By Andrea Zelinski
Doja Cat Needed Tonsil Surgery & Now She Can't Eat Taco Bell's Mexican Pizza
By Jake Viswanath
Get Even More From Bustle — Sign Up For The Newsletter