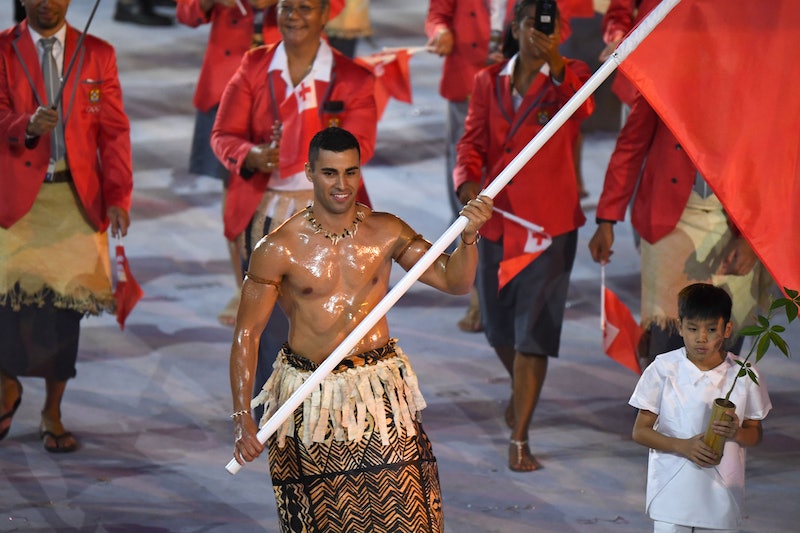 It doesn't matter how many gold medals Tonga actually procures at the Olympics, because it seems they have won the most important gold medal of them all: having the most beautifully oiled competitor. The athlete in question, Pita Nikolas Taufatofua, is famously known as the Tongan Flag-Bearer because of his dazzling performance at the 2016 Rio Olympic Opening Ceremony where he wowed fans with his traditional Polynesian dress and glossy body. Many people fell over themselves trying to find out if the Tongan flag-bearer is single? Relax, guys. Taufatofua is more than just a hunk of shining flesh and objectifying him is wrong.

The competitor in Taekwondo will be competing in the Men's over 80 kg on August 20, in case you happen to be a fan of sparring. And, in even more exciting news, Telegraph reports he's the first taekwondo competitor from Tonga ever. That's every bit as important as whether or not Taufatofua is single. But if you're still wondering — or wondering even more so now that you've heard of his impressive accomplishments — I'll help you out. It certainly looks like he is, indeed, single.

The Fiji Times shares that the 32-year-old athlete has had a pretty busy schedule for the past few years: he has modeled since he was 18, pursued his Bachelors and now Masters in Engineering, works as a Youth Counselor for disadvantaged kids, and has been training to be an Olympian — all that activity doesn't leave a lot of room for dating but certainly makes him seem even more datable.

In fact, USA Today shared a lot of Taufatofua's qualities that make him downright adorable. The first of these is his ability to never give up — Taufatofua has been struggling to qualify for the Olympics for years, having failed twice before. He is also super family-oriented. For example, though he was born in Australia and lives in New Zealand, he chose to represent Tonga (a small country with only seven other competitors and which has only ever won one gold medal) because he wanted to represent his father's culture.

To top it off, he's a serious go-getter — he managed to raise $6,262 dollars in four months on generosity.com to get himself to Rio.

His relationship status aside, it's clear Taufatofua is the catch of all catches. He's dreamy, he's driven, and he could totally protect you in a dark alleyway. I suggest cyber stalking the athlete on his Instagram and Facebook pages before you start your own generosity.com fundraiser to fly out to New Zealand and propose marriage. Or, you know, not doing that, because that would be beyond weird.

More like this
Jake Daniels Just Became The UK’s First Active Football Player To Come Out As Gay Since 1990
By Sam Ramsden
What Is Jeanie Buss' Net Worth? The Lakers President Is Uber Rich
By Hugh McIntyre
Love Of Huns' Definitive Guide To A Seminal BRIT Awards Moment
By El Hunt
Thank U, Ex
By Rosemary Donahue
Get Even More From Bustle — Sign Up For The Newsletter