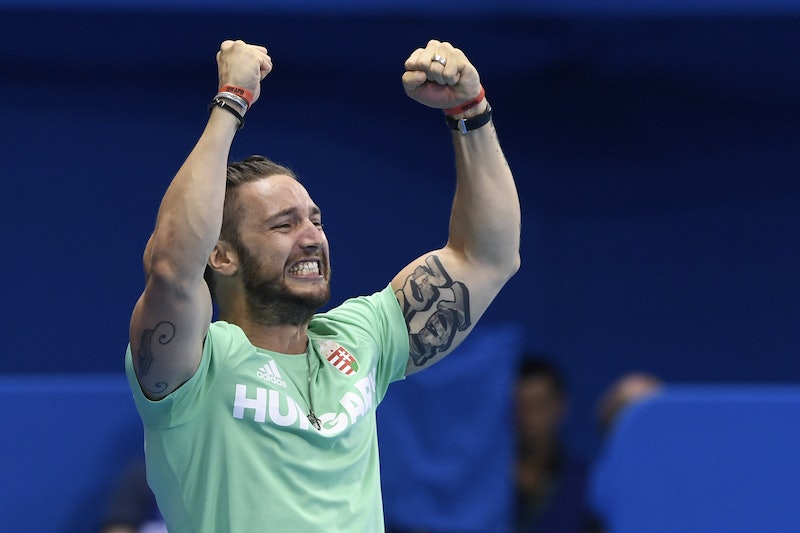 When covering female athletes, it's usually best to steer clear of referring to them in relation to the men in their lives. So as World Champion swimmer Katinka Hosszu made headlines during the 2016 Rio Olympics for her recent string of accomplishments, it was at first frustrating to see the conversations focus on her husband. Who is Hosszu's husband and coach? Her controversial relationship with Shane Tusup, who is both her personal and professional partner, has partially overshadowed her victory, but it's worth having a discussion about the decision to meld family with competition.

While coaches and athletes typically have tense relationships at times, the couple has faced particular scrutiny pertaining to Tusup's actions as her coach, which some think are a bit hostile. In 2015, video surfaced of Tusup throwing his hat and kicking a sign after Hosszu's loss to Missy Franklin in the 200-meter individual medley race.

To understand the unique pair, you have to go back to Hosszu's past in the sport. Rio is Hosszu's fourth shot at the Olympics, where before winning the 400-meter individual medley on August 6, she had yet to go home with a medal. She left the 2012 Games in London defeated, and started working with Tusup to create a new strategy. This involved spreading out her focus on more types of races, and spending more energy on the competitions than training. While controversial, it's worked out for her. At the 2012 World Cup in Beijing, she medaled in five out of eight events she entered. There, she earned the nickname "The Iron Lady."

Tusup and Hosszu met at University of Southern California, where they competed for their respective swim teams. Hosszu earned the NCAA titles for the 400-yard individual medley and 200-yard butterfly. Dave Salo coached her at USC, and worked with her until the loss in London, when Hosszu asked Tusup to take over. The pair claim that he has built her confidence and set higher goals for her than she was used to training in Hungary, which has led to her striving for more and accomplishing more. In an interview with The New York Times, Salo questioned Tusup's influence on his wife's performance: "I think the biggest issue is with her husband. I think you have to look at her motivation. Is it fear or confidence that is driving her?"

There's a hesitancy in including Tusup's name with Hosszu's success. Yes, he did work with her to turn her training process around, but then again, she is the one who is doing the swimming and earning the titles. In other instances, coaches aren't as relevant as the athlete, but the rarity of this type of relationship puts a new angle up for discussion. NBC announcer Dan Hicks came under fire after Hosszu's win when he referred to Tusup as "the man responsible" for the victory. Of course the team's strategy affected Hosszu's placement, but it was the swimmer who won the medal.

Regardless of any coach's contribution toward training or competing, the victory belongs to the athlete — we should especially remember this when it comes to women, who constantly have to fight to get the credit they deserve.

More like this
Prince William Reveals Charlotte's Hidden Talent In Ultimate Proud Dad Moment
By El Hunt
7 Expert Tips For First-Time Pickleball Players
By Carolyn Steber
The Nike & Jacquemus Collab May Have Been Inspired By Princess Diana
By Frances Stewart
The 10 Best Longline Sports Bras, According To Reviewers
By Danielle Calma
Get Even More From Bustle — Sign Up For The Newsletter