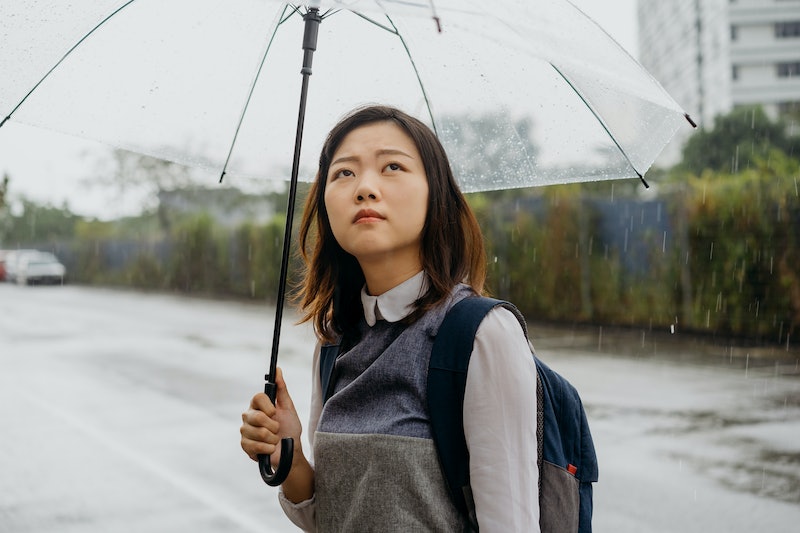 The word "disability" often has one particular image: the person in the wheelchair. But for those with invisible disabilities, the definition is far broader, and doesn't manifest itself in a way that's obvious to outside observers. Disabled World defines them simply as "disabilities that are not immediately apparent," but notes that under that umbrella term come many different types of disability: chronic pain, hidden hearing loss, PTSD, arthritis, and even learning disabilities, for instance. And yes, these are disabilities: the qualification, according to the Americans with Disabilities Act (1990), is that a person with a disability "Has a physical or mental impairment that substantially limits one or more major life activities; has a record of such an impairment; or is regarded as having such an impairment."

The life of a person with an invisible disability isn't easier than one with a visible one, though; beyond being yelled at for using disabled parking spaces (yep, that happens), they often face well-meaning misconceptions from friends, family, and coworkers. What may seem like a helpful thing to say can end up being, well, insulting.

The first thing to note about a friend or family member diagnosed with an invisible disability is that it's important to make it clear you believe them. A lot of the conversational gambits we'll discuss here subtly doubt the disability in question, even if we think we're being positive or cheering. Invisibility doesn't necessarily mean a lack of severity or an easier life, and categorizing it as less life-changing than, say, a prosthesis is underestimating the depths of invisible illness. But there are other ways in which your attempts at help may backfire.

Here are seven things you should never say to anybody who's got an invisible disability, or to their friends and family.

1. "But You Look Completely Well!"

Well, yes. Hence the "invisible" part. The thing is, this may be intended as a compliment; thinking that it should be comforting to an ill person that they don't look as if they're about to die is pretty logical. But the fact remains that people with invisible disabilities will likely hear this statement as a denial of their actual suffering. Validating a condition when so many people, including medical professionals, have likely doubted it (we'll get to that in a minute) is much more helpful than insisting that you couldn't tell in a million years. Perhaps they do look as if they could run a marathon. But if they can't, saying that things appear otherwise implies that their illness may not be as "real" as visible ones.

2. "You're Holding Other People Back"

This was a hideous sentence vocalized by the Everyday Feminism writer Sam Dylan Finch, whose partner has serious chronic illnesses of both mental and physical kinds. When the two became engaged, "concerned" friends took him aside to warn him that becoming a caretaker so young was going to hinder his ambitions. “Why are you shackling yourself to someone who’s just going to hold you back?”, they asked. This is an extremely upsetting thing to say either to a person with an invisible disability or their support network. To imply that anybody is a burden to their loved ones raises the thinking that their illness is a choice and that they should feel responsible for it, when the opposite is true. It's also frankly cruel.

Willpower alone will not get somebody out of a wheelchair, so it seems brutally incomprehensible that people could expect it to help somebody with the chronic pain condition fibromyagia to feel better and perform as a normal human being. What invisible disabilities activist Carly Medosch calls "being able to pass" (in other words, the capacity of people with invisible disabilities to appear relatively well in day-to-day life) creates problematic expectations. If the illness can't be seen, it's much easier for observers to rationalize that it can be "solved" by the application of mental force or, I don't know, doing 40 push-ups every morning.

This is one singled out by blogger Susie Helford, who suffers from the serious but largely invisible condition postural tachycardia syndrome and has dealt with the consequences of invisible disability for years. Youth, as we should all remember, is no prevention against disease; the rates of childhood leukemia should make that quite clear. Yet the presumption that chronic pain and debility, in particular, are only for "the elderly" tends to creep into the ways we deal with the young and invisibly disabled. "When you tell someone they’re too young to be sick," says Helford, "it just makes them feel even more guilty or embarrassed for having an illness they have no control over when society expects them to be healthy."

5. "Have You Tried [Insert Alternative Therapy]?"

There's something about invisible disabilities that makes people feel more comfortable recommending alternative, holistic therapies, possibly because the lack of a physical symptom (a crippled arm or jaundiced skin) makes it seem less distinctly "medical" or "scientific" in nature. Whatever the reason, though, I can guarantee that your friends with invisible disabilities will have been the target of all kinds of well-meaning advice, from massage to acupuncture to their friend Helen's second cousin's meat-free gluten-free sugar-free diet with added kale. Advice from a medical perspective is often tricky enough for those with invisible disabilities, as it can take years to reach an effective diagnosis; well-intentioned recommendations of a cure-all green Tibetan tea will likely just make them feel helpless and angry.

There is basically no way in which this can be phrased that can make it less insulting to the person with the disability. For people with physical disabilities, the idea that their significant pain and difficulty could be based purely in their mental space is demeaning and undercuts the reality of their suffering. Whether mental illnesses count as invisible disabilities remains a contested idea (the Invisible Disabilities Association, for what it's worth, definitively counts depression, anxiety, PTSD, and other serious mental illnesses in their category); but anybody with a mental illness knows that being told "it's all in your head" does absolutely nothing to reduce the power or problems of experiencing one. Whichever way your friend or family member's perspective goes, steer clear.

A huge amount of the literature devoted to invisible disabilities concerns management: of pain, of symptoms, of something approximating normal life. In many cases, invisible conditions are basically incurable, or cannot have a "cure trajectory" plotted accurately; the Invisible Disabilities Association points out that chronic conditions are often a puzzle for doctors, and official treatment plans for illnesses like fibromylagia are explicit that there's no medical cure. And if they are curable, the journey is likely to be long and hard.

What you're seeing, if a person with an invisible disability appears functional, is a case of successful management, not the end of the road. And if they aren't as functional the next day or week, it's not a "relapse," or a sign that they're "not taking care of themselves". Celebrate the good days as battle victories rather than the end of the war proper; that may well not exist.

Correction: This story has been updated to reflect Sam Dylan Finch's correct pronouns.