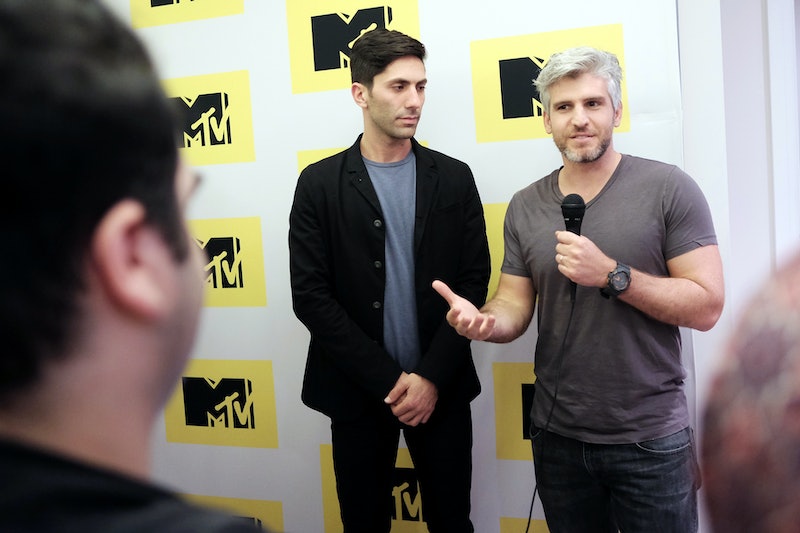 Summer may be nearing its end, but I do have some good news: Catfish Season 5B is back. The show is returning from hiatus with a new episode that's bound to get fans excited. Not only is it a two-part episode, it also is going to put a twist on the typical format by making the first Season 5B Catfish couple a serial Catfish who must be stopped. According to the trailer for the episode, Nev and Max will be joining up with several victims of "Lucas," an admitted and notorious Catfish who has hurt many people as he pretended that he was someone else looking for love online, using some pretty sophisticated Photoshop skills to do so.

Along the way, the show will get the chance to do what it does best: provide an odd backdrop for the emotional catharsis for these women who have been ticked into forming an emotional connection with someone who is lying to them. And Jayme Nelson, a former Playboy model, will be the show's celebrity guest — though don't worry, both Nev and Max will be in the episode. Jayme was also a victim of Lucas, according to MTV, and will be on hand to help get to the bottom of this episode. Overall, it sounds like it's going to be an excellent way to welcome the show back after a long hiatus.

Lucas Could Be The Most Prolific Catfish Ever

According to this trailer, Lucas may have scammed hundreds of people over the years with his fake profiles. If it's true, there's got to be an incredible story to explain how exactly he was able to do that.

Even former Playboy models can be the target of a Catfish, and she'll be tagging along, since she was tricked into starting a relationship with Lucas from his profile. Jayme Nelson once posed for Playboy, and in the trailer for the upcoming episode she mentions that she's also a dancer, and her Instagram profile shows that she currently lives in the Pacific Northwest.

Another Victim Thought She Was In Love

Without ever meeting or seeing one another over video, another woman appearing on the episode, Urszula, said she was in love with Lucas, and even had phone sex with him. When Nev and Max meet this guy, I hope they demand an explanation for all of this.

They're Going To Catfish A Catfish

Lucas knows how to cover his tracks, so he's been blocking his targets after admitting that he was a Catfish and even showing a picture of what might be his real identity. So in order to find out how he's been using the fake profile, Catfish needed to recruit some of its behind the scenes crew members to bait Lucas into Catfishing them.

They May Know Lucas' Real Identity Early On

In a preview, it looks like Nev uncovers a profile that matches Lucas' phone number, for a guy named Zac. But if this is being revealed in a promo, I'm skeptical that that's all there is to this story. In fact, I'd wager a guess that even if Lucas' real identity is Zac, there's got to be another complication.

The Victims Are Moving On

Jayme posted on Facebook in early spring that she's currently in a new relationship, proving that even though Lucas may be a powerful Catfish, after getting to the bottom of the story, it's possible for these women to move on and find real love. Catfish: helping people trust again.