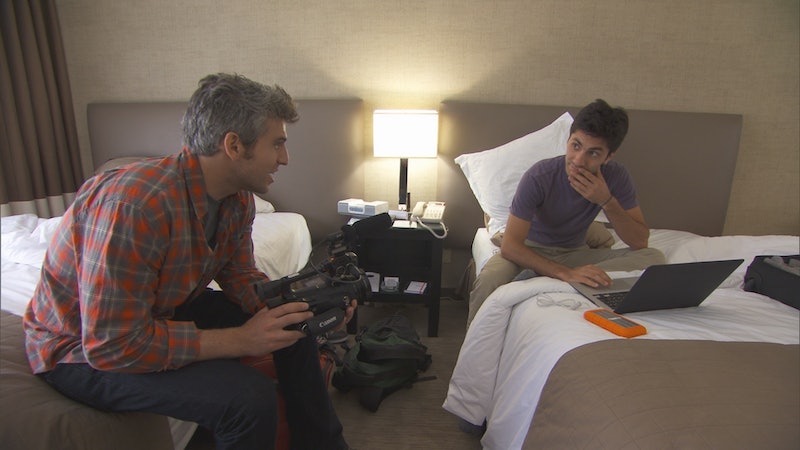 So far on Season 5 of Catfish, there have been a whole bunch of new twists on the show's now-familiar formula, including a woman who might actually be able to speak to the dead (I'm sorry, I know that episode aired a few weeks ago, but I just can't get over Kayla and Courtney). And the final episode before the show will go on hiatus will have another unconventional Catfish couple, Vince & Alyssa. Instead of the usual mistaken or unknown identity, in this case, Vince, who is the one who calls Nev and Max for their help, knows who Alyssa is. She's a woman who he claims has been stalking him online for years, and who he just can't seem to get away from.

She also happens to be Vince's ex-girlfriend, and seemingly cannot let their former relationship go and let Vince move on. Having someone bother you online might seem like a minor problem, but social media is such a big way of how people contact one another. And since Alyssa is also harassing Vince through his cellphone, this has begun to affect Vince's life in some seriously negative ways, even ruining his new relationship.

The weird thing is, Alyssa behaved like a typical Catfish at first. Vince first met her online, and while they supposedly lived nearby, he claims in the episode sneak peek that she constantly had excuse after excuse. But once he started to move on and began dating a woman he knew from real life, Alyssa began aggressively calling, texting, and basically stalking Vince 24 hours a day. According to this Tweet, Vince's next girlfriend, Liz, will get emotional over how her relationship with Vince was ruined by Alyssa's constant harassment. Clearly, Liz wants her relationship with Vince to work out, and maybe the Catfish dudes are the ones to figure it out.

So this episode won't have Nev and Max in their usual detective mode. Instead, they'll be acting more like therapists, as they attempt to determine what is making Alyssa so possessive over Vince and, probably, meet up with her in person in order to get to the bottom of this whole situation. And if you're wondering whether or not they'll be successful, a little social media sleuthing might have some answers. Almost exactly a year ago in May 2015, Vince was posting lovestruck messages about his relationship with Liz.

Unfortunately, about a month ago, Vince was posting a bit more hypothetically, as though he wished he had a relationship — not the same sweet tone as in his post about Liz. Sounds like he might be single.

That could mean that these two couldn't save their relationship, either because of Alyssa's intrusion, or, perhaps, another shocking revelation at the end of their Catfish episode. But regardless of how this episode ends, I'm curious to see Alyssa's side of the story and whether or not she and Vince are able to come to a peaceful conclusion with the help of Nev and Max.