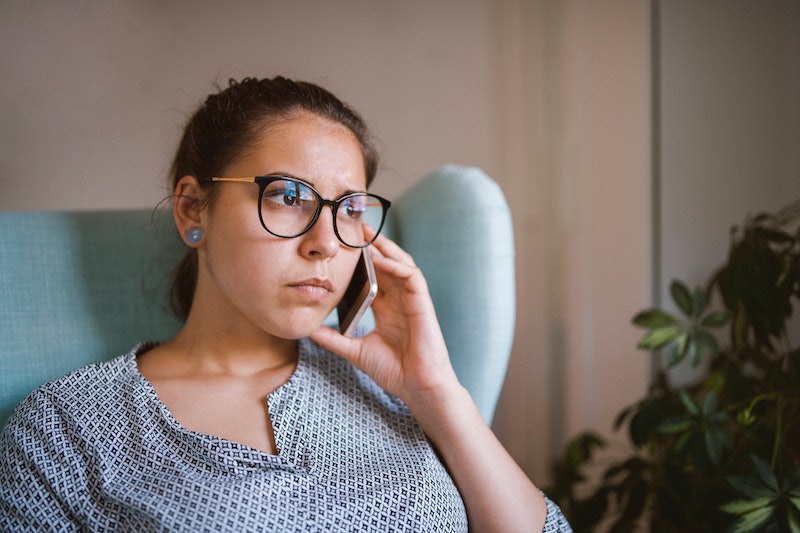 We've all encountered at least one person over the course of our lives who somehow always manages to make us feel guilty for things that we really don't have to feel guilty about. It's annoying, to say the least — so how do you respond when someone tries to guilt trip you? In the moment, it's almost always easier to say "yes," but in the long-term, this strategy can be detrimental to your own emotional and mental wellbeing; indeed, depending on what someone is asking of you, agreeing to it because you'll feel guilty if you don't can lead you into stressful or even dangerous circumstances. That's why it's so important to be able to say "no" even when someone is guilt-tripping you. Whether or not they're making you feel guilty on purpose, it doesn't excuse their behavior, and you're always justified in standing up for yourself and letting them know where your boundaries are.

When someone starts trying to lead you on guilt trip, it's easy to feel like you're basically trapped in the situation. But as Jamie Turndorf, PhD, points out at Psychology Today, "Nobody can take you on a guilt trip, if you aren’t willing to pack your bags and take the ride." While some situations are much harder to get out of than others — say, if someone has authority or is in a position of power over you, or if they're playing your heartstrings on a sensitive subject — it is always true that you do have a voice. It might not be easy; our culture often teaches us that it's rude to say "no," so going against that ingrained lesson can feel uncomfortable. But the bottom line is that it isn't always rude to say "no" — and, indeed, that it's the person who's trying to guilt trip who is being rude.

The right tools can help you be prepared to say "no," and to do it effectively. While you can definitely tweak these tips to fit your individual needs, putting some of the following techniques into action might make a big difference when it comes to facing down a potential guilt trip.

1. Remember Not To Take It Personally

If someone is trying to guilt trip you, they might try to frame it as you being the only person who can help them. Maybe it's because you have a certain skill set at work, or something about your personality that just screams you're the "perfect person" to help them out. Whatever it is, though, odds are you aren't the only person who could help them, and it's useful to remind yourself of that fact.

As Jen Smith explains at the Huffington Post, "The aim of a guilt trip is to make it personal to you, so that you succumb to their will." So yes, even if you could help someone, it doesn't mean you have to — and it certainly doesn't mean you're the only person they're asking. Odds are, you are far from the only person they can ask for help, especially if they're approaching you using guilt instead of an upfront, direct request for assistance.

2. Express How Their Behavior Makes You Feel

Similarly to how our culture teaches us that to say "no" is to be rude, we're also often brought up to believe that awkwardness is to be avoided at all costs — even if smoothing a situation over for someone else makes you yourself uncomfortable. Women in particular are socialized to put aside their own discomfort in favor of whatever is more convenient for someone else.

But it's important to remember that your feelings and voice matter, especially when someone is trying to make you feel guilty for something you absolutely don't have to feel guilty over. As Guy Winch, PhD, explains over at Psychology Today, you're absolutely valid in telling someone that their request is making you feel uncomfortable. A genuine friend will respect your feelings and apologize. Someone who is simply trying to guilt trip you, on the other hand, is likely to move on to the next person and not change their ways.

3. Put The Ball Back In Their Court

Winch also stresses reminding the person who is guilting you that their needs are important — as well as how important it is for them to take responsibility for themselves. In this way, you can affirm someone's needs without taking on the pressure of handling them yourself. For example, if your coworker Saying something like, "Yes, I agree the copy for your project should be the best it can be for this meeting; what do you think you'll do about it?" validates your coworker's concerns, but it puts the onus on them to pull it all together, rather than volunteering you for the job.

4. Practice Standing Up For Yourself

Of course, if you're a people pleaser, this is easier said than done. But that's why practicing in front of a mirror or with a trusted friend can be so effective. Getting comfortable with different ways to say "no" can make it feel much more natural when the situation actually calls for it.

5. Let Yourself Feel However You Feel

As people, we tend to want to avoid negative emotions as much as possible. This means that when we're feeling guilty, we can feel really uncomfortable and want to do whatever it takes to change that emotion in the moment. As Dr. Turndof explains in Psychology Today, however, guilt is a natural emotion — and it's OK to be comfortable with it and embrace it. Saying "no" to someone and actually feeling guilty is a part of life, and it doesn't make you a bad person. Turndof explains that the more you get used to saying "no" and embracing guilt as natural, the easier it will be to cope with, thus allowing you to move on faster. Basically, practice makes perfect.