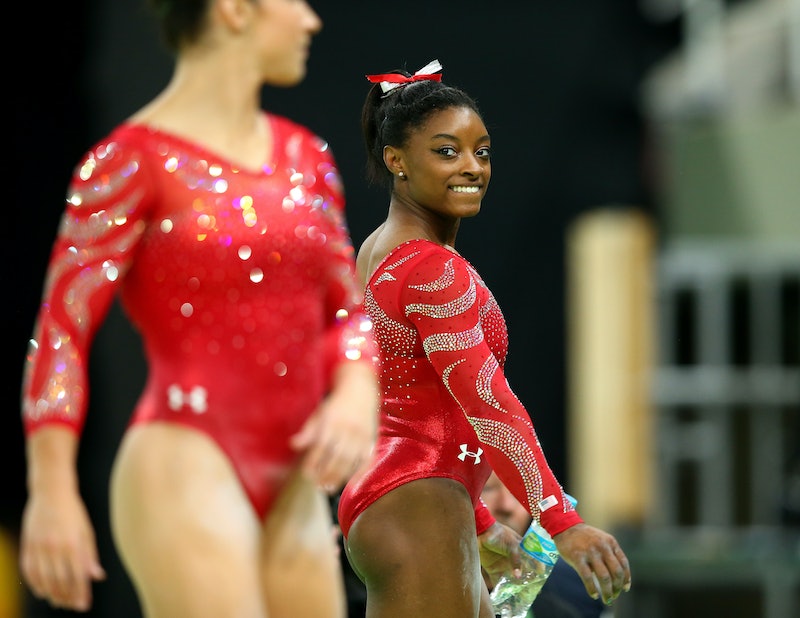 The women's USA Gymnastics Team is a force to be reckoned with. At Sunday's qualifying contest for the August 11 individual all-around competition, three members of Team USA took the three top spots. However, only two American gymnasts will be participating on Thursday. These are the two USA gymnasts to expect at the all-around individual competition.

To the surprise of absolutely no one who even peripherally follows gymnastics, Simone Biles not only qualified, but got the top score in the qualifying rounds. But even those well-aware of Biles' athletic prowess may have been shocked that she earned the highest score in three of the four events — floor, vault, and beam. Fellow Team USA gymnast Madison Kocian took the top spot in uneven bars, though she didn't qualify for the individual all-around.

The other U.S. gymnast joining Biles on Thursday is Aly Raisman, the team's captain, who's still going strong at age 22. She came in second, ahead of fellow teammate Gabby Douglas by 0.476 points. Douglas, the reigning champ of the individual all-around, won't be competing on Thursday, despite the fact that she landed the third-place spot in the qualifiers. That's because the International Federation of Gymnastics has a rule that only two members from one country are allowed to compete in the individual all-around contest.

Though countries compete against one another in the Olympics, the idea behind the Games is to foster a sense of internationalism. The federation instituted the rule to prevent one country from being able to claim all the medals available. That's what happened in the 2000 Sydney Olympics, when the podium was filled by Romanian gymnasts exclusively.

Douglas was all grace about the situation. USA Today reported her comments: "I feel like the two-per-country rule is fine. I’m feeling pretty confident, and I’m rejoicing now. It’s been an amazing experience so far. I would have loved to go back and defend my title, but you know what? It’s been an amazing ride. I can’t complain."

Biles and Raisman will be competing against 22 other gymnasts at Thursday's all-around. Other countries with two team members that qualified include Japan, Netherlands, Russia, and the 2016 Olympics' host country, Brazil.

The presence of Biles and Raisman on Team USA has made the results both of the individual all-around and Tuesday's team all-around pretty predictable. These elites are poised to walk away with plenty of medals from both competitions.