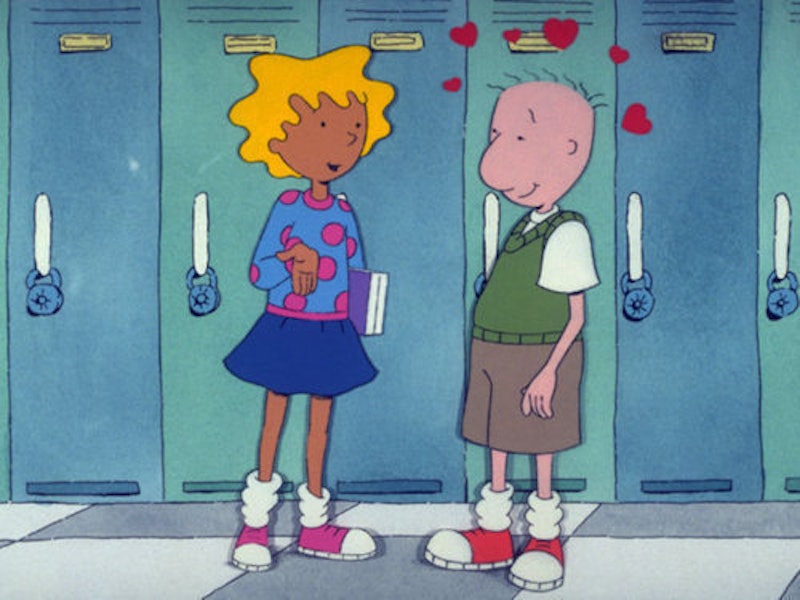 August 11 will bring with it the 25th anniversary of three awesome Nickelodeon shows: Doug, Rugrats, and The Ren & Stimpy Show. In light of this anniversary, Entertainment Weekly asked former Nickelodeon executives if there will be reboots of Nicktoons classics any time soon. And, if there were, what would, say, a Doug reboot look like? The answer to the first question is a resounding "yes!" from former Nick executive Vanessa Coffey, the woman often credited as the inventor of Nicktoons. “Absolutely. We’re talking 25 years later about these shows for a reason. And it’s not because they were different, but because they were good. They are good. I’d love to see all three of them come back.” But again, most importantly, will we get to see more of Doug?

Co-creator of Rugrats, Paul Germain, says a reboot is definitely a possibility if Nickelodeon approves it, and they figure out how to rework the universe for modern times — but it hasn't happened yet. Meanwhile, according to show creator John Kricfalus, it doesn't look like Ren & Stimpy is going to make the cut. But... Doug. Doug still has hope.

Well, sort of. According to EW, Disney got the rights to Doug in 1996, but creator Jim Jinkins doesn't think they are going to use them for a reboot anytime soon. However, don't think that that means he doesn't have a plan for the next look into Doug Funnie's life.

In fact, Jinkins has written a treatment for the key scenes of another Doug movie. In it, Doug would have grown up and moved to the big city (something like New York City). He would live with Skeeter and the never-aging Porkchop. Meanwhile, "Judy would be a performance artist off, off, off Broadway, just kind of doing weird stuff." Finally, there would still be some Patti Mayonnaise influence — though EW will not be sharing information on that relationship until August 9.

While Jinkins is pretty sure Disney won't want to move Doug forward, he also seems to continue to be hopeful. In the article he theorizes that, “Maybe if I wrote it like a book and put it out there, Disney would give me permission to do that... In the past, they have expressed interest in a play. Now, that would be a great play. So, I don’t know! But I do think I have a great story for fans to get a feel for where Doug is headed, and I thought that would be an awesome thing to deliver.”

I hope this come to fruition, because a Doug reboot of any kind is just too good to pass up. Think of the great new hits the Beets could have created in 25 years, or the weird inventions Mr. Dink could have endorsed. (Can you even begin to imagine how excited Mr. Dink would get about Apple products? It could get epic.) It will also be interesting to see the characters interacting in a largely anonymous city instead of a small town like Bluffington, where everyone knows each other. Rent is so expensive in NYC; how would they even get by?

Furthermore, imagine the changes that will undergo the minor characters — would Roger Klotz still be a bully or would he have finally figured himself out? Would Beebe Bluff still be wealthy after the economy tanked for the rest of the world (in real life) or will she have to make her own way (possibly as a stellar fashion designer)? How would the Funnie parents cope with an empty nest and retirement? (I'm thinking lots of environmentally-themed family projects.) There are so many opportunities for these characters.

Even if we don't end up with a reboot, we'll always have the good times. So, at least there's that.