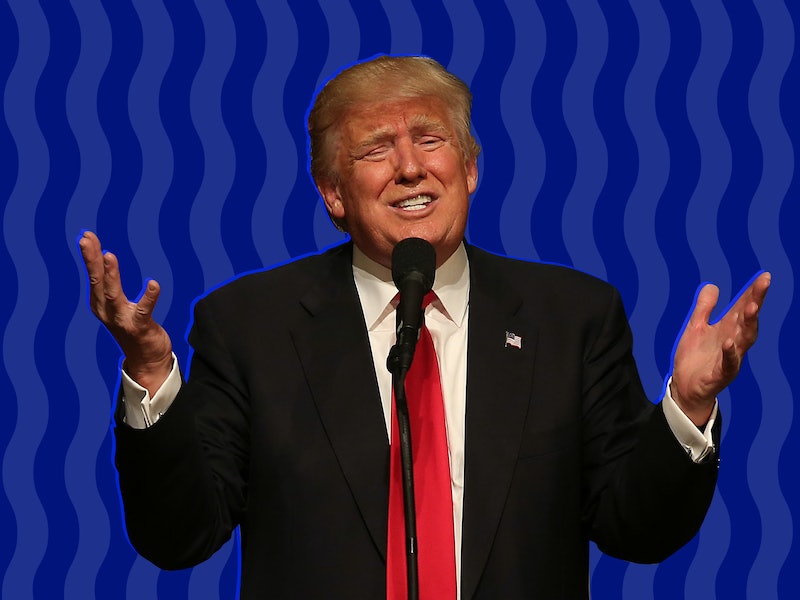 On Monday, Republican presidential nominee and baby-heckler Donald Trump delivered an economic speech in Detroit that was meant to be a "reset [for] his campaign" after what many are considering the worst week for the Donald yet. In a teleprompter-assisted speech given at the Detroit Economic Club, Trump outlined his economic and tax plans, a revision from the plan released last year. In many ways, it was an opportunity for Trump to regenerate his conservative cred by getting to talk about simplifying the tax code, getting rid of the estate tax, and, sure, why not, making America great again.

"Americanism, not Globalism, will be our new credo," Trump said, giving the speech his distinct nationalist vibe, with nostalgic reminiscences of "America First" policies (that is, American isolationists that opposed intervention in World War II). It was the economic version of Trump's vision that was promoted at a foreign policy speech in April. He also went on familiar attacks against Hillary Clinton and Barack Obama, and hammered home favorite conservative talking points on re-establishing "law and order."

But it's possible that Trump had tried to pivot one time too many, because the media doesn't seem to be having any of it. Where in the past Trump would have gotten credit for executing a teleprompter speech without any major mistakes, on Monday reporters on Twitter seemed to listen patiently before carefully explaining why Trump's policies or arguments were wrong. The best they were willing to do was to credit the short-tempered billionaire with not losing his cool at the series of protesters who interrupted his speech — 17 women were ejected from the event.

Ultimately, it's important for all of us to remember that these moments of relative sanity are just that: moments. It's the same old Trump, just buttoned-down and ironed out; the only real pivoting he's doing is being between the teleprompter on the left and the teleprompter on the right. Never mind that many of the jobs he's proposing to bring back to the United States are widely considered to never be coming back. Never mind the fact that he's still lowering taxes on the top earners, or that his suspension of the estate tax will only benefit the wealthiest Americans.

For me, it's comforting to see people getting less excited by a Trump who can somewhat keep it together and manage to stick to a teleprompter. I'm pleased the bar is no longer that low for the Republican presidential nominee.