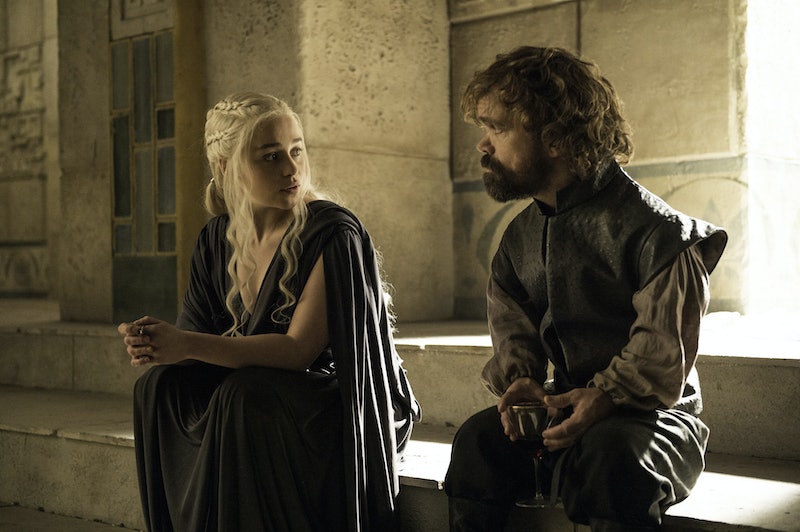 Now that Game of Thrones has answered R+L=J, the biggest mystery yet to solve revolves around the second coming of a certain legendary hero. There are already a few candidates for Azor Ahai reborn in Westeros that have some followers. Melisandre was fully on Team Jon before she was banished, but who besides Jon Snow could be Azor Ahai on Game of Thrones ?

Who is this prophesied prince? We know it's not Stannis, or if it was, Brienne royally screwed that up. They need to have the blood of a dragon. They need to be "born amidst smoke and salt as a bleeding star shines in the sky." Dragons follow their birth, which applies to pretty much anyone alive at this moment on Game of Thrones. They will wield a sword called "Lightbringer" that can take out the others — we saw Stannis trying to recreate that sword. There's also something about a red star in the

For Jon Snow, I would assume that we would interpret the "smoke and salt" of his birth as tears and defeat, discovery or maybe mystery depending on how you are defining or using the word "smoke" — there are many ways to interpret this prophecy to make it fit a particular person. What if he's been reborn into many people? There are so many theories, including one that Ser Pounce is Azor Ahai reborn (yes, Tommen's kitty cat). Other than Jon Snow, here are some people who could fulfill this prophecy.

That's the obvious second choice. A bunch of people already believe this. We don't know how she was born, except that it killed her mother, but she was reborn in Khal Drogo's funeral pyre — along with those dragons.

Another whose mother died giving birth to him (along with Daenerys and Jon Snow — curious), if Tyrion Lannister is a Secret Targaryen, that definitely puts him in the running for the prince who was promised. This also goes for Jaime Lannister, but I think Jaime has a different destiny. Being Kingslayer was pretty epic, and now he should affect change in smaller ways.

He was reborn, in a manner of speaking.

He is George R. R. Martin's favorite character, he's killed White Walkers, and he does have a cool sword now, after all. For that matter, Gilly could be part of the prophecy as well. Wouldn't it be cool for Azor Ahai reborn to be a Wildling? Brienne also has a Valyrian steel sword, and Tarth is an island — so she would have been born amongst salt.

George R. R. Martin's books support the theory that Victarion Greyjoy could be Azor Ahai reborn, but since we've seen more of Euron, I'd keep my eye on him.

Oh, please no. Matthew Patrick, also known as MatPat, and the Film Theorists make a god argument — but I just don't want it. Also this is the most depressing theory of all time.

There are way too many boys on this list, what about Howland Reed's daughter? We don't know much about Meera, but she and Jojen know a lot and have always seemed meant for something bigger. If this quiet, background hero was the prophesied savior — how cool would that be?! I know the theory that she is Jon's twister is basically dead, but still.

Since the burning star and the salt and smoke part of the Azor Ahai prophecy can be interpreted in many ways, I also think that the prophecy that Daenerys was given about Khal Drogo's resurrection can be interpreted in many ways. Just like a riddle. If Drogo comes back, does that mean he is Azor Ahai reborn? It sure would be an interesting way to end A Song of Ice and Fire.

Talk about a background character. It's a stretch. It's unlikely that Gendry's mother is Targaryen, and Robert's connection to the House of dragons is weak — his grandmother was Rhaelle Targaryen. Honestly, anything to get him back on the show. Anything. The prophecy of Azor Ahai reborn may be the key to the war against the White Walkers, and it may mean nothing at all. At least the guessing is fun!