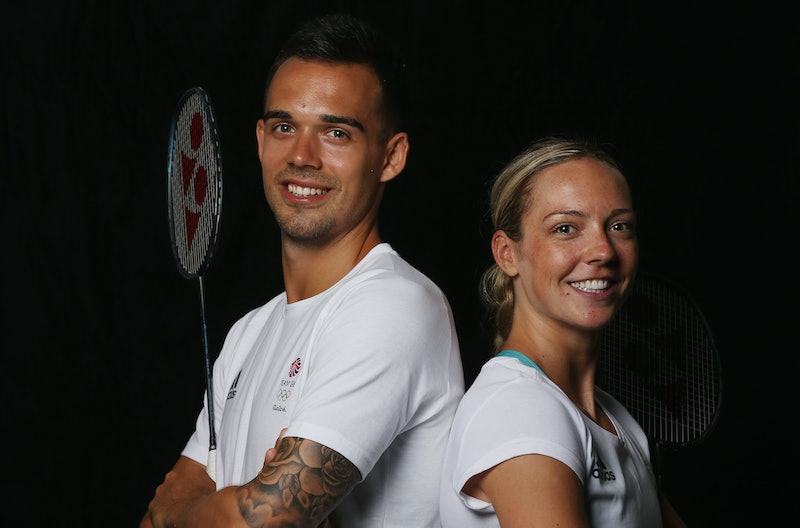 Training for the Olympics can be a grueling and isolating lifestyle filled with early mornings, long workouts, and limited opportunity for socializing, but some of the Olympians competing in Rio found love in a focused place — with another athlete, occasionally a teammate. These Olympic athlete couples competing in Rio are incredibly well-suited to be supportive of each other through the rigorous preparations and the emotional aftermath of the Olympic games. Plus, they get to share a sweet vacation to Brazil with their other half, so that's romantic.

The Rio Olympics will also be the first in which a married same-sex couple will both compete in the games. That couple of course is British field hockey teammates Kate and Helen Richardson-Walsh. The two have been friends since childhood, began dating around the Beijing Olympics, and were married shortly after the London Olympics.

I have a theory that there is something unexpectedly romantic about the Olympics. Maybe it's a contagious passion for giving your all to something you love, or maybe there's some kind of primally suggestive mind-control going on as we watch a month-long marathon of people doing work in spandex. Whatever it is, these Olympic couples have caught the bug big time, so let's meet these lovebirds.

Calling all TV writers — Chris and Gabby Adcock's story is truly rom-com material. The two were childhood friends, and in 2013, the two both got married and became badminton doubles partners. These two recently suited up to compete for Great Britain against Denmark.

The first same-sex wives to compete in the Olympics, the Richardson-Walshes and the British women's field hockey team have already advanced to Monday's quarterfinals.

I'm getting major adorable-overload from these two U.S. fencers who have been Instagramming the daylights out of their run up to the Rio games. These two met at Notre Dame where they were, unsurprisingly, both on the fencing team. Follow both of them for all of your social media #relationshipgoals needs.

These two beautiful people are members of Australia's Taekwondo team. Like many Olympians, Maron and Khalil met as children on the Taekwondo circuit but didn't begin dating until years later. Marton converted to Islam, which she said was a natural transition from Catholicism, and married Khalil under Islamic law, but the couple is waiting until after the Rio games to celebrate their Australian civil wedding ceremony.

The two British cyclists and multi-medalists got engaged on Christmas of 2014, and you can follow their two-wheeled adventures as well as find lots of pictures of their three little dogs on Trott's Instagram.

Is there something specific about British Olympians that makes them hopelessly attracted to each other? A couple since early 2014, O'Connor says that her relationship with Walker-Hebborn is a positive influence for her in the pool.

What do you get when you cross an American decathlete with a Canadian heptathlete? A ridiculously cute couple that goes on ridiculously cute dates — you know, the ones where you casually summit the Swiss Alps, hike the Great Wall of China, and travel together to Rio to compete in the Olympics. The couple met while competing together on the University of Oregon track team, and were married in 2013.