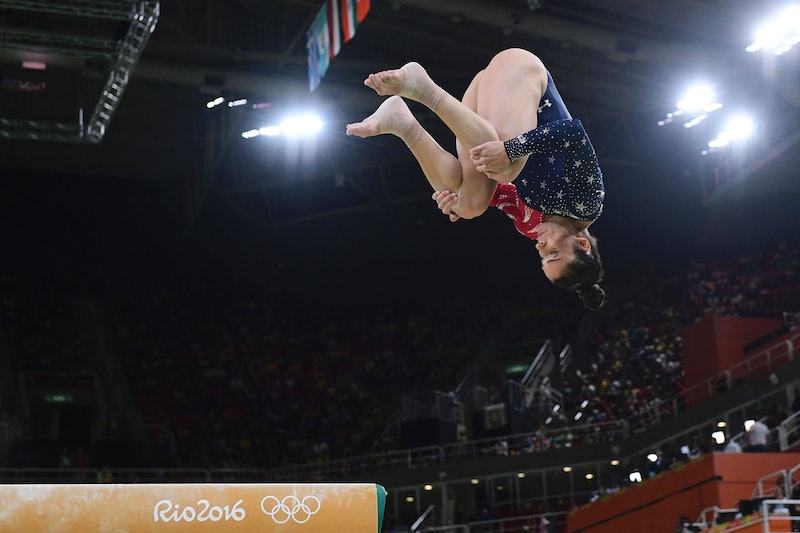 The 2016 Olympics have only been underway for three days, but there have already been a number of iconic moments at the games in Rio. One of the greatest moments came when the U.S. women's gymnastics team scored 10 points ahead of all of its competitors, qualifying star gymnasts Simone Biles and Aly Raisman for the event's all-around finals. In an editorial written for Team USA, 2004 Olympic gold medalist Carly Patterson broke down exactly why the girls rocked the house, and discussed U.S. team captain Raisman's stunning execution of "The Patterson" dismount. But just what is that move? This impressive dismount has an amazing history that definitely justifies the hype.

In 2004, Patterson was the first American woman to win an all-around gold medal in 20 years, a feat which Team USA said "helped lead a resurgence of success for Team USA in gymnastics." One of the biggest reasons for her 2004 win was her execution of the Double Arabian dismount, a mind-boggling move in which a gymnast flips and lands once on the balance beam, and then dismounts with another flip, landing on their feet. Patterson debuted the move to perfection in 2003, and although she wasn't the first gymnast to do it, her gold-medal-winning use of it in 2004 caused it to be referred to as "The Patterson" ever since.

This wasn't Raisman's first time doing "The Patterson." The U.S. team captain was recorded doing a "Patterson" at the 2012 AT&T American Cup, and again in 2015 at the Secret U.S. Classic. It's become something of a signature move for her, and the original Patterson said she's proud to see another ranking U.S. gymnast do her eponymous move:

I’m partial to Aly’s beam because she does my dismount, 'The Patterson,' which is so cool to see others do.

There are a handful of other famous gymnasts who've executed "The Patterson" as well. In 2014, British gymnast Ellie Downing became the first Brit to execute the dismount at that year's English Championships, and Russian gymnast Viktoria Komova pulled off "The Patterson" at the 2012 Olympics in London with style and grace.

While the move is incredibly difficult (and anxiety-inducing for Raisman's famously nervous parents), it proves not only Raisman's skills as a gymnast, but also that she, like Patterson herself said, "has the heart of a champion." Patterson said she sees a "ton of gold medals coming home" from the USA gymnastics team, and as Raisman moves forward toward the all-around finals, the world will be watching.