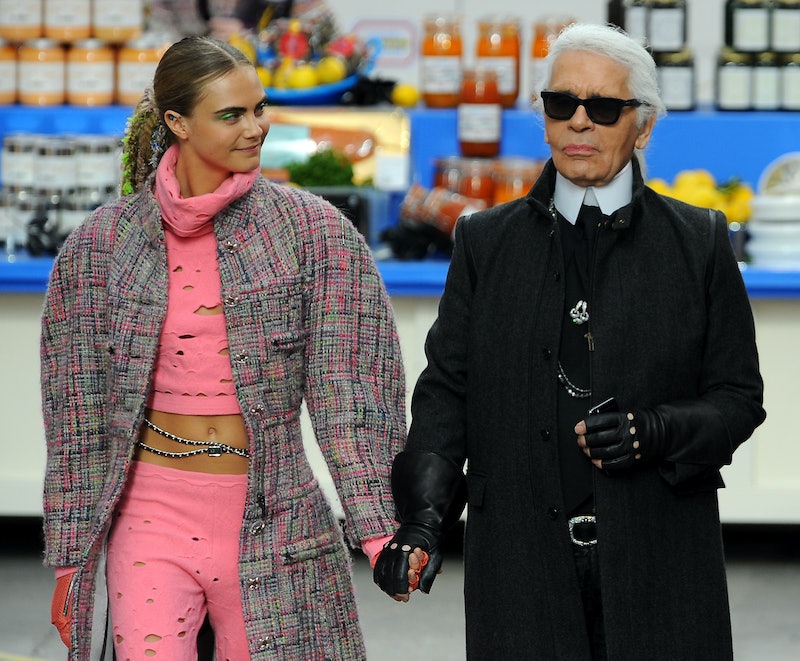 Karl Lagerfeld is pretty much always saying things that make us all shake our heads at least a little bit. In his most recent interview with The Sunday Times, Lagerfeld compared Cara Delevingne to Kate Moss. And while a comparison as such is certainly flattering, this isn't the first time a popular model has been compared to the almighty Kate Moss.

With Lottie Moss, Kate's little sister beginning modeling (I mean, what can be more "Kate Moss" than the sister of the real thing?), beginning to model recently and a dozen other hyper-popular models being seen everywhere from movie premieres to Taylor Swift's Instagram account (hey, Karlie), it seems odd that Delevingne is being compared to Moss. Supermodels are as famous as many actresses today, and many reach the same level of celebrity that Kate Moss had at a time when models were much more behind the scenes than red carpet.

Despite questions we may have about the comparison, not many people argue with Karl Lagerfeld — and he is nothing but complimentary of the 21-year-old model, even when comparing her to Charlie Chaplin (yes, really).

She's a character. She's the Charlie Chaplin of the fashion world ... She is kind of genius, like a character out of a silent movie. I would see her better in a silent movie than a talkie because she over-accents the movement. Girls admire her like they used to Kate Moss. They all want to be as free as her.

Though, at the end of the day, this is Karl Lagerfeld we're talking about — and the man certainly knows a thing or two about high-fashion models — we have to wonder if he has noticed that, well, Cara Delevigne doesn't seem to take modeling all that seriously. Something tells me Kate Moss feels a bit differently about her (still thriving) career as a model.

Of course, the comparison may not be as outrageous as, say, saying that Kim Kardashian is this generation's Marilyn Monroe, it's certainly one that can't be taken very seriously — even if it's coming from Mr. Lagerfeld himself. Plus — can you imagine Kate Moss in a onesie? Yeah, me either.