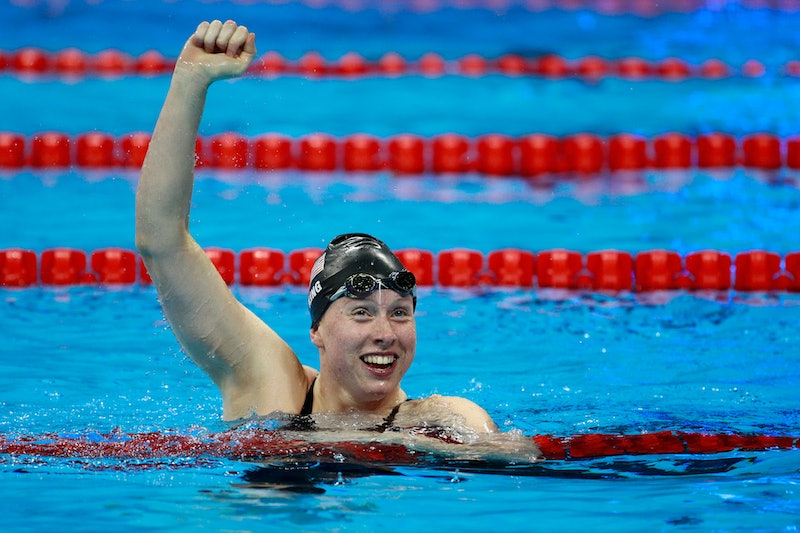 At the 2016 Olympic games in Rio, American swimmer Lilly King won the 100-meter breaststroke, defeating Russia's Yulia Efimova to take home the gold medal. There was something of a beef brewing between the two swimmers, owing in part to Efimova testing positive for performance enhancing drugs, but that beef was settled with King's victory on Monday night.

This match was controversial before it even began. In 2013, a drug test found traces of a prohibited substance, the anabolic steroid DHEA, in Efimova's system. In response, the international governing body for competitive swimming, FINA, banned her from competition for 16 months. After the revelation of a Russian state-sponsored doping program, and a positive test for meldonium, the International Olympic Committee banned her from the 2016 games as well. But Efimova appealed that decision, and at the eleventh hour, the Court of Arbitration for Sport overturned the Olympics ban and gave her the OK to compete in the 2016 games.

After placing first in her semifinal heat on Sunday, Efimova raised a single finger in the air, to indicate that she was "number one." This did not sit well with King, who'd made a similar gesture after posting the quickest time in the semis, and in response, she waggled her finger at Efimova in what amounted to a masterful piece of shade-throwing.

"You know, you're shaking your finger 'number one' and you've been caught for drug cheating," King said in an interview with NBC at the time. "I'm just not a fan."

On Monday, King defeated Efimova for the gold in the 100-meter breaststroke, putting an end to their nascent feud once and for all. Here's video of her victory.

In a post-race interview, King twisted the knife just a little bit more for good measure.

"It just proves you can compete clean and still come out on top with all the hard work you put in behind the scenes, behind the meet, at practice and weight sessions," King said. "There is a way to become the best and do it the right way."

This may not have even been necessary, though: In addition to losing out to King, Efimova was booed by the crowd when she made her entrance.

"I really don't know how I even reached the final," said Efimova, somewhat cryptically, after King's victory. "It would have really been the end of a fairy tale, a horrible dream, if I'd won gold. But that was all I could do right now."

The saga is a reminder of two age-old adages: Cheaters never prosper, and winners don't use drugs.