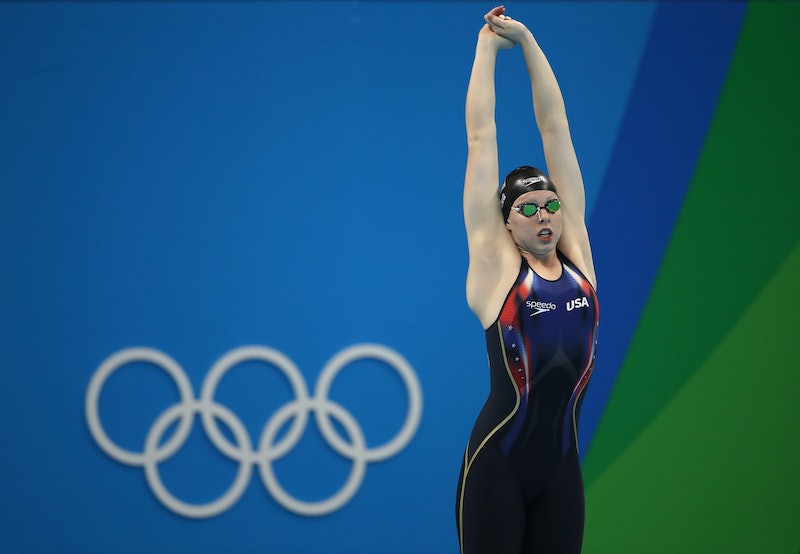 We're only three days into the 2016 Olympics, but the athletes competing have already given us plenty of meme fodder. Among the more meme- and joke-worthy competitors is Lilly King, a 19-year-old first-time Olympian swimmer who is a beast at the breaststroke. King made headlines on Sunday when she was recorded wagging a pointed finger at a photo of Russian swimmer Yulia Efimova, who was previously banned from the Olympics for testing positive for performance-enhancing drugs, only to be reinstated the night before the semifinals. These King jokes and memes prove that she's not only a beast in the water, but also wins the gold in telling it as it is, so to speak. As it turns out, she's not afraid to speak her mind in front of millions of Olympics viewers.

Called a "crowd villain" by USA Today, Efimova was booed at the Olympic Aquatics Stadium Sunday night, likely because she was not only banned from 2013-2015 for drug use, but also because she tested positive for the performance-enhancing drug meldonium, only to have her suspension lifted two months after she failed the test.

Basically, what happened this morning was that I finished and then I waved my finger a little bit, because that’s kind of how I am. Then tonight just now Yulia got done with her swim and I am watching in the ready room — and there she is there shaking her finger. So then I got done and I beat her time so I waved my finger again.

She took it several steps further in a brief interview with NBC when she told reporters why she reacted that way toward Efimova:

You’re shaking your finger ‘No. 1’ and you’ve been caught for drug cheating. I’m not a fan.

The finger wag seen around the world was, accordingly, not missed by Twitter, which jumped on the opportunity to use the Olympic drama for comedic effect.

The Finger Wave Itself Is Savage Enough

Who knew a simple gesture could be so powerful?

Commentators have pointed out that King's finger wag is reminiscent of that of retired NBA star Dikembe Mutombo's famous finger wave, which the NBA banned in 1999 after the fan-favorite gesture allegedly disrupted games.

King's gold medal win over Efimova is very reminiscent of this Geico ad that Mutombo starred in.

The Truth Finally Comes Out

As Kanye West said, "it's hard to be humble when you stuntin' on a jumbotron."

Her Poise In The Face Of Haters Is Unreal

Who wouldn't want to do this?!

This Could Be King As A Child

Those are clearly goggles.

She Clearly Had The Final Say

Winning the gold is the Olympic mic drop.

We all hope that one day we can have a King finger wag moment. But until then, we have memes to live vicariously through.