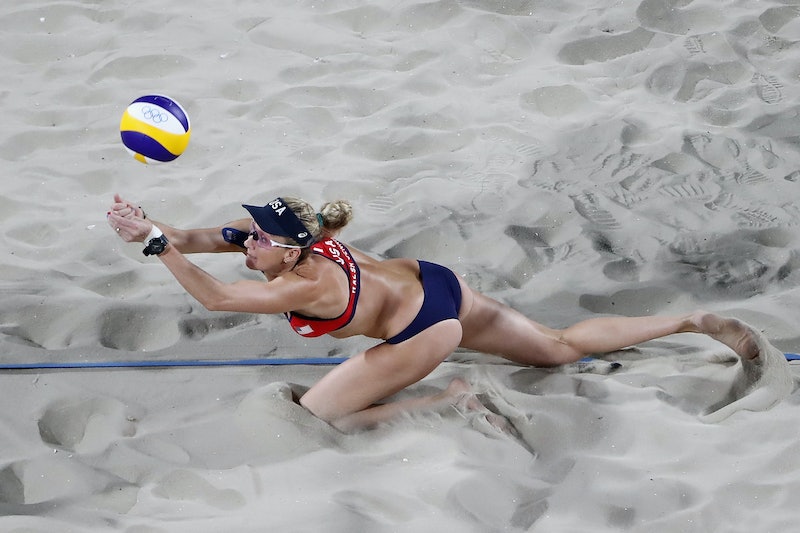 Today in cute Olympic news, you have to see this cat watching Team USA women's beach volleyball on TV. During their second preliminary match against China's Wang Fan and Yue Yuan, powerhouse duo Kerri Walsh Jennings and April Ross dominated the court at Copacabana Beach, winning 21-16 and 21-9. However, it was the cat who earned the title of MAP (Most Adorable Player).

NBC Olympics posted a video on its Facebook page of the cat swatting at the TV as the volleyball flew from side to side throughout the game. Like Taylor Swift's cat watching the Olympics, the clip showed that animals too enjoy the biannual event. Beach volleyball is an especially captivating sport for a cat to watch, since there is a fast-moving object to attract their attention. So it wasn't a surprise that this adorable cat was captivated by the action

With so many eyes on the competitions, the Olympics are typically highly susceptible to the formation of memes. Beach volleyball cat currently contends with Aly Raisman's nervous parents, bored lifeguards at swimming competitions, and the Michael Phelps death stare for most memorable Rio Olympics bystander. Take a look at the video below, and prepare to feel patriotism in the most adorable way.

As you can see from the footage, the cat's quick reflexes would certainly provide an advantage during the game. As the ball flies, the cat easily follows along and moves to where the ball is headed. However, the cat also appears to be helping Team China at one point, so there's possible disqualification for that. Regardless, its form is solid, despite multiple distractions. It could be a valuable player with a bit of focus and determination.

Luckily, Walsh Jennings and Ross had the "winning" thing down. Rio 2016 is Walsh Jennings' first year playing without former partner Misty May-Trenor, with whom she won three Olympic gold medals. The pair defeated Australia's Nicole Laird and Mariafe Artacho in the first preliminary round, 21-14 and 21-13. Walsh Jennings and Ross play their third and final preliminary match on August 10 against Switzerland. The competition will likely heat up as they advance, but here's hoping they can overcome, even without the help from friendly felines. In the meantime, someone give this cat a gold medal for participation.

More like this
The 10 Best Cat Puzzle Feeders
By Lauren Moison
My Picky Eater Dog Absolutely Devours This All-Natural Food
By Allison Berry
Ryan Reynolds Brought Some Famous Friends To Wrexham A.F.C's Last Game Of The Season
By El Hunt
Jake Daniels Just Became The UK’s First Active Football Player To Come Out As Gay Since 1990
By Sam Ramsden
Get Even More From Bustle — Sign Up For The Newsletter