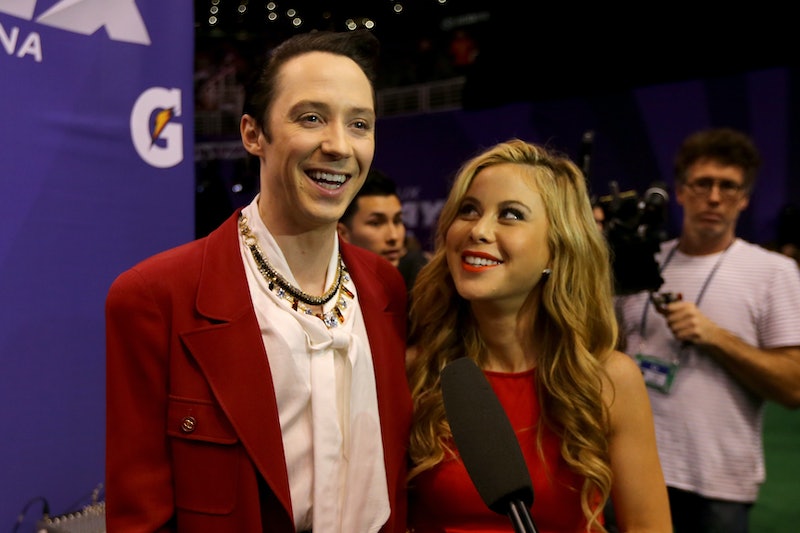 Two of your all-time favorite Olympians are not in the race for medals in Rio. But fear not! Even though these are not Winter Olympic Games, Tara Lipinski and Johnny Weir pretended to compete in 2016. How? By swimming in their hotel room bathtub. That's right; an online video posted to the Tara & Johnny Instagram account shows just how marvelous it would be to put either of the figure-skaters-turned-commentators into the pool next to Michael Phelps or Katie Ledecky.

They might drown, but the Twitter commentary would be epic. This go-around, though, it's just a webisode of the Lipinski-Weir sports insights that are gracing NBC's coverage of Rio. It starts in their Rio hotel room; Lapinski is in a hoodie with shades on, stretching as Weir gives the voiceover: "Ms. Lipinski preparing for the race of a lifetime, for self and for country. Four years ago in London, all was lost when Lipinski fell off of the start blocks. What's happening today?"

Cut to Weir standing on the bathtub in a Speedo, seemingly ready to dive headfirst into the one-foot-deep water. Lipinski then took over: "Mr. Weir coming into this event, placing 22nd in the qualification round. Three, two..."

The video cuts back and forth between the two. Weir comes up gasping for air while wiggling around in the tub. Lipinski casually reenacts the backstroke, sitting up the whole time. "And he wins it! Johnny Weir," Lipinski announces as a wet Weir pulls himself out of the pool — er, tub. Unfortunately, she loses, and Weir throws in the towel for her from off-camera. It lands right in the water.

In addition to the Instagram antics, the duo of former skaters have an official role for NBC. They're covering the cultural commentary needed in a city as energetic and colorful as Rio. Plus, this is not their first time to the rodeo. They've come together to cover several big-time non-skating events, like the Super Bowl and Kentucky Derby.

They've been the topic of conversation as much for their smashing outfits as their Instagram antics. Weir allegedly brought about nine suitcases to Rio. Other tidbits from their segments? Some advice to the Olympians that they pee before beginning competition, which is definitely not bad advice. They also would like to see roller skating added as a summer sport — big surprise there.

If you enjoyed their attempt at Olympic swimming, make sure not to miss the other editions, which are also on Instagram. They've also covered track (the treadmill) and the balance beam. (Which, as they pointed out online, was "about twice the width of a real balance beam." And yet still not so easy.) Lipinski looks nearly a natural. "Ms. Lipinski has the eyes of the world on her, an entire nation's hopes rests on her small shoulders," Weir narrates.

When they switch this time, though, Weir has a bit more trouble. He looks like he's about to fall through the window of their Rio hotel room. "Major point loss," Lipinski points out. "He's now figure skating." So they may not be naturals off the ice, but at least they're not totally retired. They'll be at many an Olympics to come with their original view on things. Heck, I may even watch the Super Bowl next year if they're there.