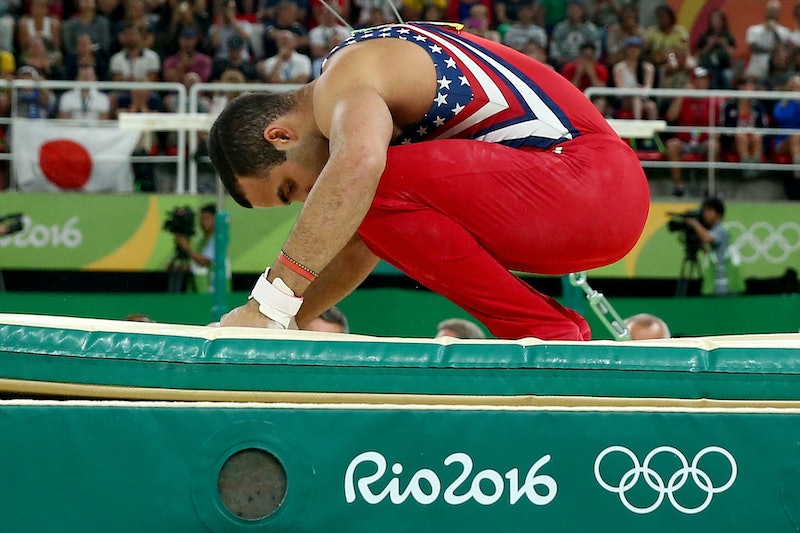 The United States Olympic gymnastics team got off to a disappointing start during their events on Monday, raking in loss after loss to the Japanese, Russians, and Chinese. The five-man team was unable to find their rhythm during these finals. But fortunately, the men's shot for a medal in Rio isn't over just yet — each teammate could still potentially take home the gold during the games' upcoming individual events.

The team's first day on the mat certainly didn't go as planned. The group placed fifth in what increasingly became Japan's clear pathway to victory. The Japanese gymnastics team captain, "King" Kohei Uchimura, led his group to a resounding triumph during the all-around team final. As the reigning Olympic all-around champion, Uchimura is considered one of the greatest gymnasts of all time, and left the United States team far behind in his wake. Japan easily took home the gold, followed by Russia, China, Great Britain, and a clearly shaken United States.

The team unfortunately didn't fare any better during their two strongest events in the vault and parallel bars later in the day. U.S. gymnast Jacob Dalton placed tenth overall in the vault event, while Danell Leyva barely qualified for the parallel bars final with a seventh-place finish.

Despite this rough start, each member of the U.S. team has a chance to redeem themselves in the games moving forward. Just this week, Leyva can take home a medal in the men's individual all-around competition, as can the other four members of the team.

Likewise, each member has a chance to score a medal in a series of individual events throughout the next week of the games: finals in the men's pommel horse, floor exercise, vault, rings, and parallel and horizontal bars. Likely, these six additional events will put the U.S. team in good standing to take some medals home from their time at the Rio Olympics.

And for what it's worth, their low scores during the all-around team final haven't entirely dampened the group's spirits. Team Captain Chris Brooks told USA Today that their pathway to the podium will be simple: they must merely hit their routines. With a renewed focus on the individual events, Brooks told the publication: "There’s no defense in gymnastics, so we control what we do, hit routines, go for some stuck landings, and at the end of the day, hopefully that will be enough."

Here's to believing that hope will be enough to push the U.S. team through to a victory — and a few gold medals.