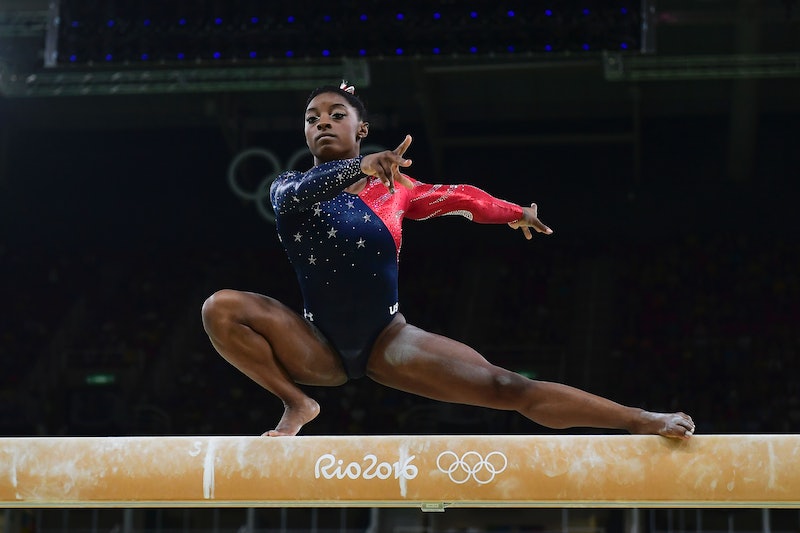 U.S. gymnast Simone Biles swept the floor in an unprecedented victory during her events on Sunday, which was where the focus of the evening should have stayed. But unfortunately, NBC commentator Al Trautwig reframed the night's narrative, and his comment about Biles' adoptive parents will enrage you.

Trautwig doubled down on his big mistake. In discussing Biles' story on air, he suggested that the gymnast's adoptive parents were not her actual parents. When called out online, he dug his heels in further, again refusing to address them them as her parents.

Trautwig's foot-in-mouth moment began when he called Biles' adoptive parents her grandparents during NBC's prime-time coverage of the gymnastic event. It has been well-documented throughout Biles' career that her grandparents adopted her and her sister out of foster care in 2001, as her birth mother struggled with an addiction to drugs and alcohol.

Time reported that Biles' birth mother is rarely a factor in her life, and only has communication with the Olympian during birthdays and holidays. From the moment she was adopted, her parents immediately stepped in full-time. Biles told Time: "I have everything I need so there are no blanks left unfilled. I never felt I had questions or needed answers or had a part of me that was missing."

All of this made Trautwig's remarks even more ridiculous. After being corrected by a Twitter user, the NBC commentator doubled down on his falsehood, saying: "They may be mom and dad but they are NOT her parents." The tweet was deleted not long after it was originally posted, but no matter — screenshots served their purpose, and the resultant backlash against Trautwig was justly fierce.

Viewers, adoption advocates, and even Biles' coach, Aimee Boorman, weighed in, all telling the commentator that the Olympian's adoptive parents are indeed her real parents. NBC reportedly instructed Trautwig to delete the tweet, and he soon issued a formal apology over the offense: "I regret that I wasn’t more clear in my wording on the air. I compounded the error on Twitter, which I quickly corrected. To set the record straight, Ron and Nellie are Simone’s parents." It's sad that it took him this long to figure out that simple fact.

So now that the air has been cleared regarding Trautwig's ridiculous "actual parents" statement, hopefully the Olympian can get back to focusing on the real challenges of the games, and continue to take the top spot in event after event.