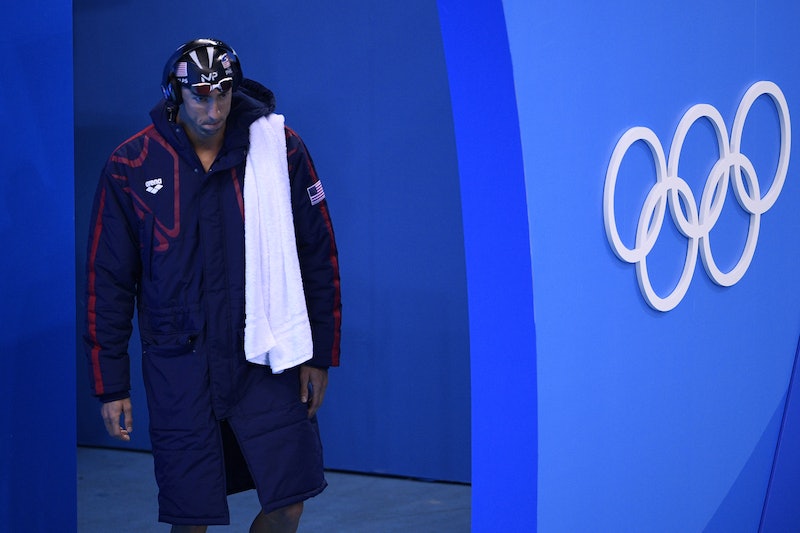 As we all know by now, when someone does something unintentionally funny on live TV, it's only a matter of minutes before it manifests into memes on the internet — it's how Millennials process. So if you have an internet connection, you probably already know about the Michael Phelps face meme. If you haven't, I'll break it down for you: really, it's one of our more basic memes. The Olympic swimmer was caught with a sour expression, photobombing a group shot of swimmers pre-race as captured by NBC.

While a group of athletes enthusiastically prepared for the 200 meter men's butterfly semi-finals on live TV, Phelps reserved his energy by sitting in a chair with absurd intensity. Around him, athletes are jumping up and down, warming up, dancing to music, stretching. And there Phelps is, burning holes into floor of the pool with his laser stare down.

A part of me feels bad for Phelps — he's been given a lot of distracting press that has nothing to do with his ability. He's one of the greatest swimmers in history and we're more interested his extracurriculars. That said, here are 13 of my favorite #PhelpsFace memes!

Honestly tho, it does feel like a slap in the face. You'll eat in anyways, but it still feels like a visual betrayal.

Wait, It's Not Even Wednesday!?

When Monday is such a beast that you're convinced it was two days.

I Could Have Had More Time?!

You know when you wake up first that you're not going back to sleep and your whole morning is probably screwed.

She Always Says No

As if you couldn't possibly be old or wise enough to understand what foods you're craving.

This Love Has Taken Its Toll On Me

I mean clearly something has.

You Better Lose Yourself

In the music, in the moment, you own it. Definitely rocking some pre-rap battle vibes here.

Really? ~Your~ Going To Swim?

Spelling and grammar check should really be on our side by now with this. Why are we going to see that red squiggly save us before we give someone a reason to lose hope in our intelligence?

And you hate yourself for forgetting but spend the whole day cursing the company for having an off day.

When You Really Shake Him Up

And he rises from the dead to join in on the #PhelpsFace fun.

It Can Be So Frustrating Tho!

When people don't understand that you don't do life the same way. Like, no, go wiggle over there.

This one is probably going to stick around for a while. I imagine there will be a few angry Phelps for Halloween, too.

But all's well that ends well — particularly if you're still winning gold at your fifth Olympics. Props to Phelps and all the faces he will make this year!

More like this
8 Epic Must-See Moments To Relive From The Lionesses’ Euros Win
By El Hunt
I Tried The $20 TikTok Viral Oishii Strawberries — Here's What I Thought
By Sophie Hanson
What Does POV Mean On TikTok? The Popular Acronym, Explained
By Emma Carey
Here’s How To Get Verified On TikTok
By Emma Carey
Get Even More From Bustle — Sign Up For The Newsletter