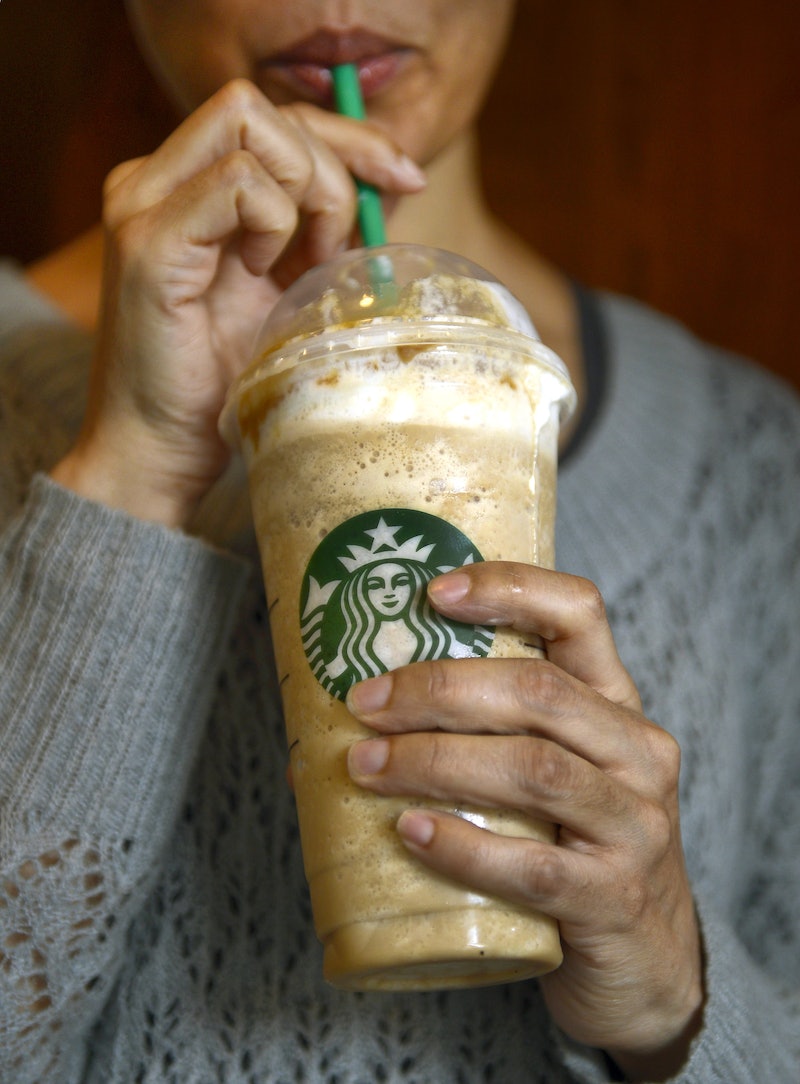 If almond milk is your thing, you'll be pleased to hear that Starbucks will soon be catering to your needs. But how much does Starbucks almond milk cost ? Because as anyone who likes to go lacto-lite will attest, it isn't the cheapest dairy alternative, although it certainly is delicious an nutritious. As such, there will be a small additional charge for the tasty treat once it arrives on the Starbucks menu — but the good news is that it's still an affordable upgrade.

Here's the deal: According to a press release from Starbucks, the new "almondmilk," which begins rolling out across the United States on Sept. 6, "can be used in any handcrafted Starbucks beverage for an additional 60 cent charge." It's also a good option for those looking to cut down on their sugar intake: The press release also notes that "an eight-ounce serving has just three grams of sugar, compared with 12 to 13 grams of naturally occurring sugar in two percent dairy milk." (And yes, it's "almondmilk," not "almond milk"; according to Starbucks, the menu uses "the latest industry approach of spelling non-dairy milk alternatives." The same goes for "soymilk" and "coconutmilk," by the way.)

Low in sugar and only an additional 60 cents per beverage? I can get onboard that nominal fee, especially if it's good for our health and tastebuds. And in further good news, Starbucks assure us that this minor milk charge will be more than worth it; the almond milk on offer will be unlike any other almond milk you've ever tasted because the coffee giant is making it themselves. Cue the impressive nod.

As Starbucks beverage R&D manager Yoke Wong said in the press release announcing the new milk option, Starbucks almondmilk “was designed so that when steamed, it creates a rich foam for hot beverages and is delicious and creamy when served in cold beverages. ... The almond butter in our almondmilk adds body and complements the roasty notes of espresso.”

Er, that sounds pretty perfect to me. And the fact that almondmilk works well in hot and cold drinks means we can switch it up between our iced drinks, Frappuccinos, and lattes whenever we choose to. Hooray for variety!

The introduction of almondmilk to the Starbucks menu couldn't have come at a better time, given America's current dairy-drinking habits; according to consumer research group Mintel Data, 58 percent of U.S. adults drink non-dairy milk, with almond options being the most popular at 60 percent of the non-dairy market. Starbucks also took into account feedback from My Starbucks Idea, the company's site for crowdsourcing ideas from customers and baristas alike — on the platform, almondmilk has been one of the most suggested menu additions.

Starbucks almondmilk will be available across 4,600 stores in the United States starting Sept. 6, with stores in the Pacific Northwest, Northern California, New York, Northeast, and Mid-Atlantic tasting it first. For everyone else, a nationwide rollout happen by the end of September 2016. Cups at the ready, people.