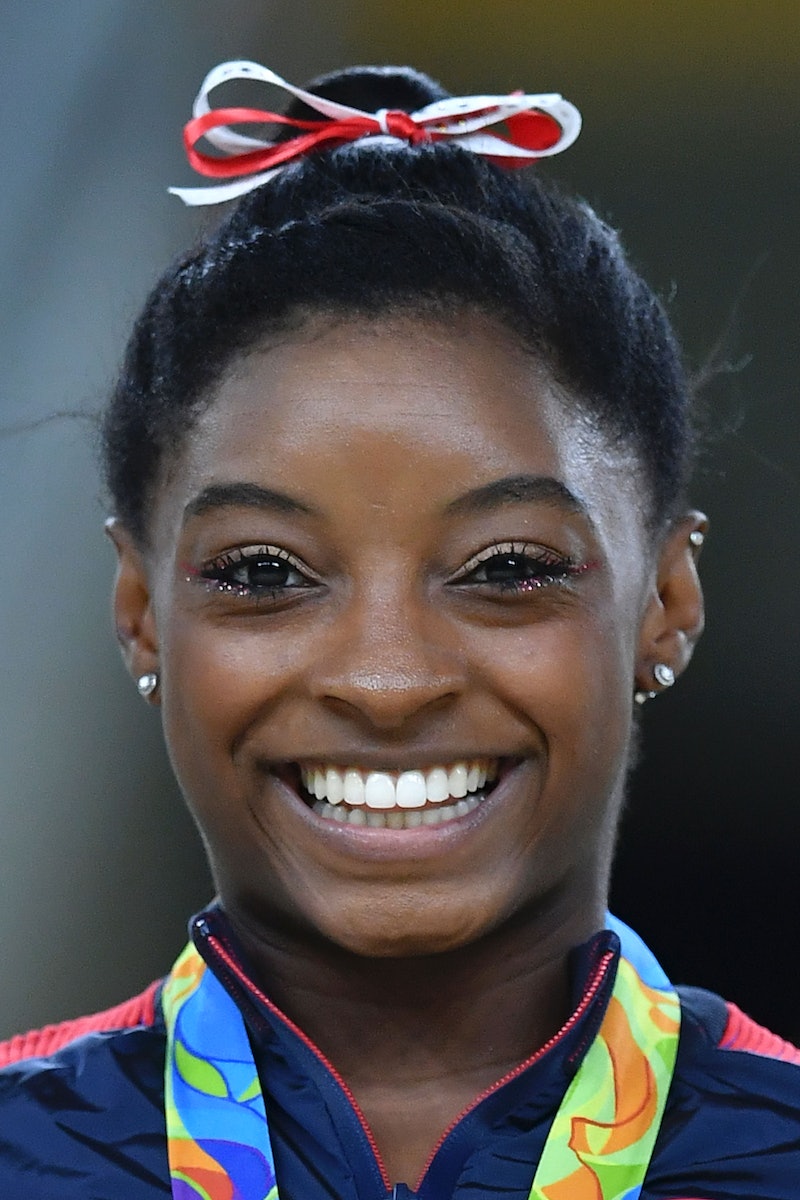 If you think makeup on Olympic athletes is inappropriate….Well, let’s talk about that. There are rules about makeup in the Olympics, and revising the guidelines seems to dig up the same old anti-makeup narratives in society. As the 2016 Olympic Games are playing out in Rio de Janeiro, the world is watching the women Team USA vault in winged liner and race in red lipstick. Many of us can’t help but cock our heads at the TV, thinking, “She’s competing at the highest level of human athleticism, and she’s wearing blue eyeshadow?” Some of us grew up thinking makeup makes women weaker, and only truly "brave" and "confident" women go barefaced, which can lead to some confusion when we see strong, female athletes with a penchant for sparkly eyeliner.

Feminism is advocacy for the rights of all women — the rich and poor, multicultural and non-binary, and the superbly athletic. It's the last point, specifically, that's causing confusion. It appears that being good at sports (the best in the world, in fact) means you aren't allowed to appreciate some good me time getting dolled up in the mirror before what's likely the biggest event of your life. At least, not if you're a woman.

We've had plenty of fashionable and flamboyant male sports figures who were celebrated for their flair. Russell Westbrook of the Oklahoma City Thunder is known for his fashion statements before and after games, and the Houston Rockets’ James Harden is celebrated on and off the court for his facial hair. In the ‘80s, then-college football player Brian Bosworth initiated a country-wide craze for wild haircuts. Plus, you know, Dennis Rodman. Whether it’s their tattoos or shoes or grooming choices, we have long rallied around (and celebrated) the stylish expressions of male athletes.

But when we talk about women athletes and their hair, makeup, and fashion, we see a different reaction. Olympic gold medalist gymnast Gabby Douglas was reamed by Black Twitter for “that hair” during the 2012 games. During the USATF Indoor Track & Field Championships, two-time Olympic runner Shannon Rowbury received backlash for her bright lipstick. And that’s the soft stuff: Tennis players and sisters Serena and Venus Williams regularly receive insults over their physical appearances.

Our society can stomach muscular men in tights vaulting over a pommel horse, or a flashy football player dyeing his hair a wild color. But the sight of a ripped, world-class female athlete prancing (or squatting, or fencing, or running) toward the gold in makeup appears to be unsettling to most people. When men bend gender norms to blend “masculine” performance with “feminine” pageantry, people can’t look away. When women do it, people can’t help but critique.

To some, a full face of makeup on a female Olympian athlete simply undermines her seriousness and skill. As Refinery29 reported, Tamara Holder of Fox Sports Court said that “we all know the old adage 'sex sells,' well, now, female Olympians are sexing it up more than ever by wearing makeup during their competitions." She goes on to ask viewers if makeup could be a source of strength. "Some say this is about empowerment, well, really? Do women who are elite athletes need to wear makeup to feel stronger, or is it simply a fashion statement?”

Doing something someone told you not to do because it's "too girly" is inherently a feminist act. Many of the athletes have been quoted saying things that invalidate Holder's skepticism. “You can be a strong, athletic, courageous woman and you can wear lipstick,” Rowbury said in an interview with USA Today. “I like being able to be all those things or try to help inspire young women to be all those things. It doesn’t have to be one or the other. It’s a form of expression, especially in track and field where my uniform is provided by my sponsor (or the USOC). I basically have my uniform and my shoes and there’s not a lot of expression that’s allowed and there aren’t many ways to show your personality.”

For the sake of safety and fairness, the Olympics (and most competitions, even down to the middle school level) have rules about what you can and cannot wear. Clean, short, unpolished nails sound boring or even unfair until a competitor accidentally jabs a finger into your eye and ends your shot at gold. Plus, the global nature of the games calls for some rules around propaganda — painting your fingernails with a message of pride or personal opinion can upset viewers of different cultures (or ignite international tensions). Fair enough.

However, Olympic makeup rules are governed by each sport. "Performance sports" like gymnastics and ice skating more directly address makeup rules, and are usually more lenient. Still, no event at the Olympic games explicitly prohibits their athletes from donning makeup. The panel of public opinion is not as reasonable. Makeup on a female athlete is refreshing for some, and infuriating for others. Either way, viewers can't help but comment.

The snide suggestion that women athletes who wear makeup are not serious competitors directly contradicts another arbitrary societal norm: women with makeup on at work are serious. According to a study funded by Proctor & Gamble, Massachusetts General Hospital, Harvard Medical School, Boston University, and the Dana-Farber Cancer Institute, women who wear makeup to work are paid 30 percent more money than women who don't wear makeup.

But athletes aren't flustered by that kind of judgement, instead claiming the opposite. “It’s kind of this look good, feel good, play good mentality,” said Ali Krieger, a U.S. Women's Soccer player, in the same USA Today interview. “I do feel empowered, I do feel good. Mainly I think it’s because our games are on TV and people see photos or videos of themselves. I think I would do this for any other job, so why not do it when I play soccer? Because it is my job.”

According to the USA Today piece, Krieger began wearing makeup after the 2011 World Cup and the simultaneous rise of social media coverage. But performing the most intense moment of her career (while the world watches live in high definition) isn't her only motivation for makeup. The ritual itself can be an excellent distraction from the stress of a world stage. Sounds pretty serious.

“If I’m rooming with a teammate who also wears makeup, we’ll get ready at the same time, turn on some music and get in our game day mode together,” Krieger said. “I’m going to work and I want to look good. You’re not only representing yourself, but U.S. Soccer.”

The soccer team isn't the only one getting ready together: Aly Raisman, the now gold medalist gymnast, posted to Instagram a behind-the-scenes look at her team's makeup routine. "So excited to cheer my girls on!" she captioned a picture of her putting on teammate Madison Kocain's makeup. For anyone who has ever been on a team, you know that the rituals formed (no matter how silly) are essential to feeling confident, ready, and even a little lighthearted going into a competition. Plus, it's a powerful way to show support.

There are a million reasons to compete in makeup. Foundation can make a competitor feel confident during the most intense moment of her career (while the world watches live in high definition.) A lipstick color can be a nod to a family member or teammate. Blue eyeliner can simply show spirited affection for your country. Wearing sparkly eyeliner even though someone told you it's silly can prove that strength and femininity don't have to be mutually exclusive.

But when it comes right down to it, a woman's "why" when it comes to makeup is not our business. Even if — or perhaps, especially if — she is an Olympian.