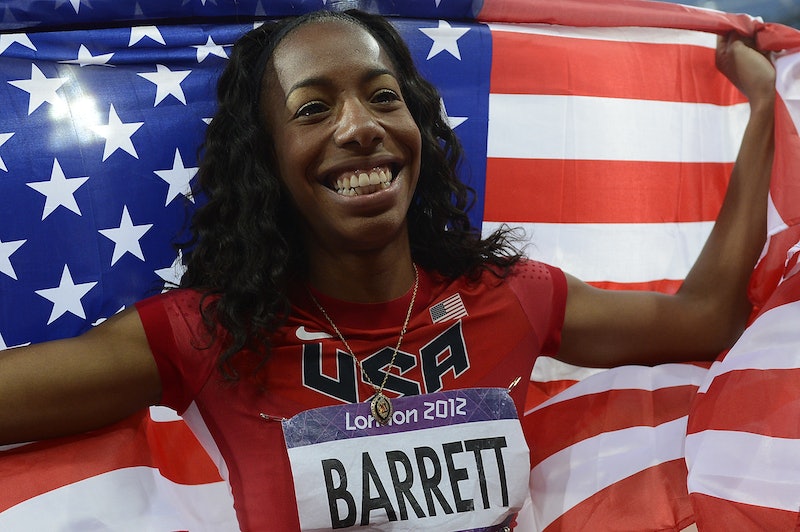 It's always cool to see what makeup athletes wear when they're doing their thing, because if it can last through a sporting event, it's gotta be something good. But when it comes to the Olympics, are there rules about what makeup athletes can wear? After all, the Olympics have been known to be somewhat strict when it comes to dress codes and the like. But after doing some digging, it appears that makeup rules are governed by each sport, not the Olympic games as a whole.

I guess that's not too surprising though. As we know, there are certain events where the athletes require a full face of makeup (think synchronized swimming and figure skating), while there are other events with, generally, much stricter guidelines (hi, gymnastics and beach volleyball). However, with some athletes turning towards permanent makeup, it seems as though there shouldn't be any rules against minimal makeup across all sports. And I have to say, having your eyebrows tattooed on seems like it would save a lot of time as an athlete. But because a generally "kempt" appearance seems to be the overarching rule where makeup is concerned at the Olympics, here are some more specific cosmetic rules for four sports at the summer Olympics.

In an interview with Fashionista, Olympic gymnast, Alicia Sacramone, revealed that while gymnasts are even allowed to rock a red lip during their events, their nails must be either neutral or totally polish-free.

Although synchronized swimmers are some of the athletes you have probably come to expect to be wearing the works where makeup is concerned, according to the Fédération Internationale De Natacion (FINA) guidelines, "Theatrical make-up [sic] shall not be worn. Straight makeup that provides a natural, clean and healthy glow is acceptable."

While there do not appear to be any formal rules regarding makeup, those competing in Taekwondo (at least from the U.S.) are to keep their nails short and maintain personal hygiene "of the highest standard."

Athletes competing in Track & Field don't have the same polish restrictions that gymnasts have. In fact, many of these athletes often don manis that represent their countries. However, there was controversy a few years ago when a couple of Swedish athletes wore rainbow-painted nails to support gay rights at the IAAF World Athletics Championship. The Huffington Post noted that, "While the International Olympic Committee's rules do not explicitly bar rainbow colors— a well-known symbol of gay pride— its charter does specify that no political propaganda is 'permitted in any Olympic sites, venues or other areas.'" Of course, this rule also extends to every other Olympic event.

So although some specific rules do exist here and there, it seems as though no event at the Olympic games explicitly prohibits their athletes from donning a little makeup. After all, it's nice to be able to add some personal flair.

More like this
The "Cloud Skin" Trend Is An Updated Way To Wear Matte Makeup
By Jordan Murray
Rita Ora’s Sheer Dress & Mermaid-Inspired Prosthetics Stun At British Fashion Awards
By Sophie McEvoy
M.A.C. Cosmetics’ Newest Collection Celebrates Whitney Houston's Legacy
By Audrey Noble
Raheem Sterling Had To Choose Between His Family & The World Cup
By Bustle UK
Get Even More From Bustle — Sign Up For The Newsletter