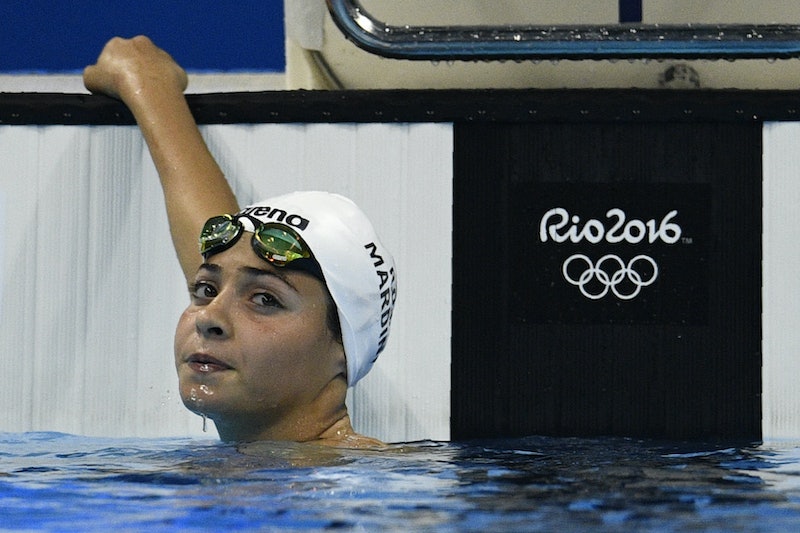 While all athletes have a long road to the Olympics, swimmer Yusra Mardini had a journey filled with more than the average amount of obstacles. A member of the Olympics' first ever refugee team, Mardini is from Syria and before she got to Rio, she experienced a truly harrowing night between Turkey and Greece. The 18-year-old's story has generated a lot of buzz because she literally swam her way to freedom.

Most athletes go to the Olympics with one thing in mind: winning gold. But, for Mardini and the rest of the refugee team, the 2016 Rio Olympic games are about more than winning. She has a lot more perspective and life experience than most of her fellow athletes (and fellow 18-year-olds) and for Mardini just getting to the Olympics is a dream come true. While the swimmer explained to multiple outlets that a medal is likely out of reach, as she is about 10 seconds behind athletes vying for gold, silver, and bronze, her presence and personal journey to get to Rio is the embodiment of what the Olympic Games are all about — global citizens, strength, unity, and inspiration. When asked by The New York Times about her goals and qualifying for a medal, Mardini, wise beyond her years, said, “I’m expecting personal best."

Mardini’s story begins in Daraya, a suburb of Syria's capital city, Damascus. According to the same New York Times article, she began training at the age of three under the direction of her father, a swimming coach. Mardini was on track to compete for the Syrian national team, and was supported by the Syrian Olympic Committee, the newspaper reported, but her Olympic aspirations were put on hold when war broke out in 2011 — Mardini was just 13.

Mardini told The New York Times what life was like as a teen in modern Syria. She discussed school closures, shootings, and the monotonous ubiquity of war and said, “In the beginning, everyone talked about it, but then after a few years, we were like: ‘O.K., if I’m going to die, I’m going to die! But let me live my life. I want to see my friends!’” Her words show the bravery and fortitude of a true Olympian.

The article also reported that Mardini’s home was destroyed in 2012 during the Daraya massacre, what the The New York Times described “one of the worst onslaughts in the early part of the war.” The center where she trained was also damaged.

Barely one year ago, on Aug. 12, 2015, Mardini and her sister Sarah fled Syria with a group of family friends. The New York Times explained that the sisters and the rest of the party travelled from Damascus to Beirut, Lebanon to Turkey. And, the next leg of the storied journey would be what set in motion Mardini’s path to the Olympics.

After being bused to Izmir, Turkey, Mardini, her sister, and 18 other people — including a 6-year-old boy — set off in a small, packed boat for the Greek island of Lesbos. According to The New York Times, the boat was only built to accommodate six people. About 20 minutes into the voyage, the engine died and the dinghy began to slowly sink, according to a CNN interview with Mardini.

Only Mardini, Sarah, and two young men on board knew how to swim, so the four of them jumped into the choppy waters and began to push the boat (this story is also featured in the Visa commercial below, which airs during the Olympics). During this arduous three hours at sea, Mardini told CNN that she lost her glasses in the cold, painfully salty water. Even after the young men gave up, Mardini and her sister persisted, and she told CNN, true to her strong nature, "I thought it would be a real shame if I drowned in the sea, because I am a swimmer.”

Not only did Mardini survive, but she and Sarah pulled 18 people to safety and freedom in Greece. However, the journey was far from over. From Greece, she travelled to Macedonia, then Serbia, then Hungary, then Austria, and finally Berlin, Germany, where Mardini lives with her sister and where she has been training for the Olympics. (The New York Times reports that Mardini’s parents and two younger siblings have since joined the Olympian in Berlin.)

The 18-year-old has spent the last year training for the Olympics, and while she is not a frontrunner for a medal, she made it to the games as part of the first-ever refugee team. And her time in Rio has already included a victory for Mardini, which serves as an inspiration for us all. She won first in her heat in the 100m butterfly. While Mardini didn't medal, her courage and tenacity are worth more than gold.

In an interview with The Independent, Mardini offered some words about her unique odyssey to the Olympics and the journeys of her fellow refugees that anyone watching the Olympics should read, to understand what the refugee team has faced:

“I want everyone to think refugees are normal people who had their homelands and lost them not because they wanted to run away and be refugees, but because they have dreams in their lives and they had to go … Everything is about trying to get a new and better life and by entering the stadium we are encouraging everyone to pursue their dreams.”

Mardini may not win a medal in Rio, but she's certainly one of the 2016 Olympics' most inspiring athletes.