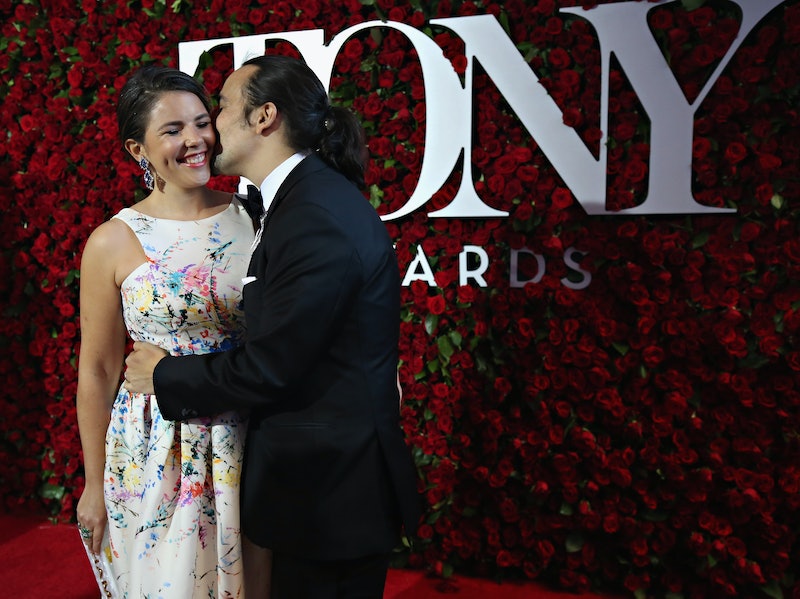 There are cute celebrity couples that make me melt with every red carpet photo and Instagram candid released, and then there's Lin-Manuel Miranda and Vanessa Nadal, who take the celebrity couple envy to the next level. Truly, in my time as pop culture aficionado, which has been pretty much my entire life, I have not come across two people who seem so damn smitten with one another. It's almost too much to bear. Almost. But it's mostly just painstakingly sweet. So much so, that I've decided to compile a list of Miranda and Nadal's most adorable pictures together. You know, so I can remind you of their love. See what I did there? Eh? Eh? OK, OK, I'll stop.

Of course, if you follow either Manuel or Nadal on social media you know that while the two have their own things going on, what with Miranda composing, writing, and acting in musicals, TV, and film, and Nadal being both a lawyer and a scientist (yes, you heard correctly), they always still manage to make time for each other. Interspersed between their tweets about their work, support for each other's endeavors, and cute musings about their son, are swoon-worthy pictures and posts about and with one another. They should teach all celebrities a crash course on how to "couple" in public.

Now, onto the good stuff. Here are 12 of Miranda and Nadal's most adorable pictures together.

1. This Photo Where They're Staring Into Each Others Eyes

2. This Pic Where They Looked Super Chic

Now that is a red carpet couple.

3. This Snap That Miranda Took Of His Wife, But Mostly, That Caption

All significant others in the world, pack it up and go home.

5. This Epic Pic When They Wore Matching Outfits

They totally pulled it off.

6. The Time They Strutted Their Stuff On The Hamilton Red Carpet

Prom Queen and King, yo.

7. When They Took An Especially Great Group Selfie

Her head on his shoulder, I'm gone.

8. When Miranda Tweeted A Photo Of Vanessa When She Was Pregnant And She Tweeted The Sweetest Thing Back

*Wipes eyes* Don't look at me!

9. When He Took An Unsuspecting Selfie With Her

Sneaky, but worth it.

10. Direct Your Attention To Their Perfect Wedding Picture On The Right

11. When They Looked Like A Modern Day Sandy And Danny From Grease

Tell me about it, Stud.

12. When They Were Featured On "Humans Of New York"

Be still, my heart.