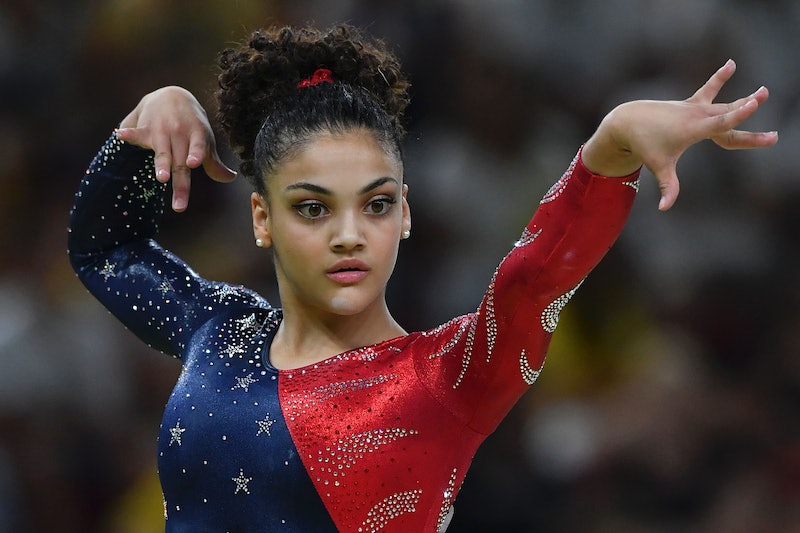 On Tuesday, the U.S. women's gymnastics team will be competing for Olympic gold in the team all-around competition, and you're surely going to see some dramatic, breathtaking moves on display from a host of past Olympians and newcomers alike. But when the artistic floor routine rolls around, all eyes will be on one of the American women: Laurie Hernandez, who took a starring turn on Sunday and has generated a tremendous amount of anticipation. As such, maybe you're curious to know what Hernandez's floor music is, since the pulsing rhythm was such an essential part of the celebrated performance that brought her this far.

Luckily, this is pretty easily answered. If you watched Hernandez dance and prance her way to the finals on Sunday, you were watching her execute some flowing, artistic choreography set mainly to "Da Bop" by WTF!. It's an upbeat tune that served her very well the last time we all got to see her routine, and barring any super-surprise changes at the last minute, it's what you'll see her taking the floor to during Tuesday's final as well. As it stands now, Hernandez is widely considered a favorite to turn in the best of the floor routines, although anything can happen ― she also batted down injury rumors last week.

As noted in the exhaustive coverage of the Olympics heading into the big event, Hernandez's music was cut together by the fiancée of her coach, Maggie Haney. She first performed to the music at the P&G Championships in 2016, so it's a relatively new look and sound for her, but she's clearly confident in it. As Julia Fincher detailed for NBC, Hernandez is fond of the segue between classic, retro themes and a more modern style of physical expression:

In the beginning I do a little dance where it looks like I’m a waitress, I think, like ‘do do do,’ you know with the skirts and the hair in the bun and the headband and everything. And then all of a sudden, it just snaps into very modernized music, the same tune but just a different way of playing it. ... I’m sure once everyone listens to it they’re going to be wowed by the way that the music is just put together. It’s genius.

So far, Hernandez's prediction has been proven to be spot-on. She was by far the breakaway star of the floor routine on Sunday, and alongside her team, the New Jersey native could have a gold medal around her neck by the time the night is over. If you're hyped to see how it all plays out, the finals start at 3 p.m. ET on Tuesday afternoon.

More like this
The Spice Girls & Adele Lead Girl Power Celebrations For Lionesses’ Euros Win
By Sophie McEvoy
What Is Ben Affleck's Net Worth? At 50, The Oscar Winner Makes 8 Figures Per Film
By Meg Walters
The Lionesses Are Calling For Equal Access To Football In Schools
By Sophie McEvoy
The 12 Best US Open Tennis Outfits Of All Time
By Avery Matera and Dominique Norman
Get Even More From Bustle — Sign Up For The Newsletter