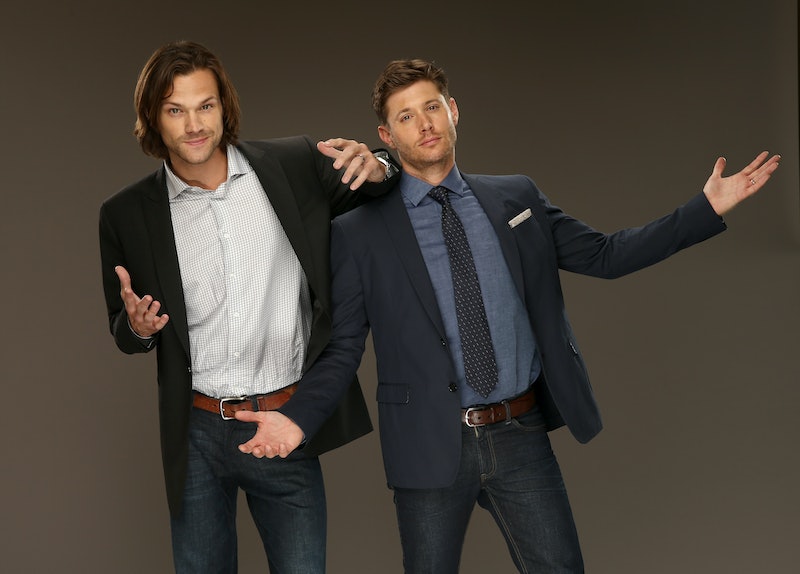 Supernatural fans know how much Sam and Dean Winchester love to prank one another. Well, the same can be said for the actors who bring the beloved characters to life. Since returning to set to begin the filming of Supernatural Season 12, Jared Padalecki and Jensen Ackles keep pranking Stephen Amell. It only makes sense, especially since the three are pretty close friends and all film in Vancouver. Plus, how can you pass up a good prank? They're fun and when you know Sam and Dean would approve, you have to do it.

The TV brothers pulled their first prank against the Arrow star on Sunday. Padalecki shared an Instagram of himself and Ackles pretending to urinate on Amell's parking spot nameplate. Alongside the amusing photo, JarPad wrote, "Just hanging with @jensenackles , doin a photo shoot.... We ended up at the Arrow stages! But we didn't see @stephenamell ... Oh well..." Padalecki also took to Facebook, where he shared the same photo, but with this caption: "These all-day photo shoots REALLY take it outta ya! Jensen Ackles and I had to 'create' our own bathroom! Know what I mean, Stephen Amell?"

Don't worry, the actor who brings Oliver Queen to life wasn't offended at all. He responded on Facebook, "That's the best thing that has ever happened in my parking spot."

Their shenanigans didn't stop there, because the Supernatural co-stars also ended up changing Amell's parking spot nameplate to "Stephen Smells," and even drew somewhat of an inappropriate stick figure on it. At least they were nice enough to sign it, "Love J & J," right?

If you think the Arrow lead is going to let them get away with the pranks, you'd be wrong. During a Facebook Live chat Monday, Amell vowed to get revenge. He said (around the 5:00 mark),

"Jared and Jensen desecrated my parking space yesterday and changed 'Stephen Amell' to 'Stephen Smells' and wrote a very inappropriate doodle drawing, like stick figure drawing. I will have my revenge. I don't know how. I don't know when, but I believe revenge is a dish best served cold and one that is not discussed. So, I will never mention it again, but just know that I will not let this tomfoolery go unpunished."

He then added, "I am super pissed. I'm not actually, but I will have my revenge — probably, maybe." Amell also said it will happen when Ackles and Padalecki least expect. He even said he texted Padalecki to expect something from him in the near future, but it will probably happen when they're too comfortable and "after [Jared has] had his hair done." The latter are Amell's words, not mine.

Basically, this prank war is far from over, so expect more from all three CW stars. I mean, Ackles and Padalecki have already moved onto The Flash set. The two were filmed sleeping and eating on the set, which apparently isn't allowed based on two signs posted that read, "No sleeping on set!" and "No food on set!" Alongside the video tweeted Monday, Ackles wrote, "Hangin on the #TheFlash set w/@jarpad .. Hey @grantgust how do u get any work done with all these rules? #NeedNaps"

I can only imagine what kind of prank they'll pull next, but they can always look to Sam and Dean for inspiration. For example, putting itching powder in someone's clothing or superhero costume is a classic. Better yet, placing superglue on someone's beer bottle will do the trick. Granted, those two may be a little extreme for Ackles and Padalecki, but it's clear they aren't afraid to have a little fun with their fellow CW stars.