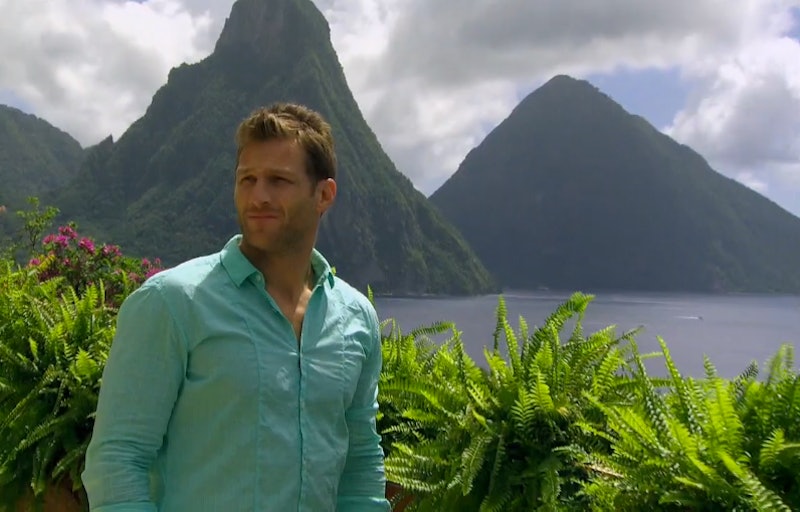 Just as things were looking good for Clare on the Bachelor finale — things had gone well with Juan Pablo's family, her hair was holding up in the St. Lucia humidity, she expressed that she was in love with the dude — Juan Pablo decides to go ahead and ruin everything. During their last date, Juan Pablo tells Clare in the helicopter that he doesn't know her, that they don't know each other, and then, he says something so drastic that Clare can't bear to repeat it. Basically, we can infer that Juan Pablo said he liked "hooking up" with her, but only in more vulgar terminology. Maybe he said he liked having sex with her? Liked f*cking her? Yikes. Talk about some turbulence. Ba dum ching.

Clare explains that the helicopter ride provided a rare opportunity to share their feelings because they're not miked and there are no cameras around. And how does J.P. choose to use this un-documented time? By pulling his classic "I'm just being honest" card. He dropped a bomb on poor Clare in the chopper, then when he goes to Clare's room to discuss the secret shared in the air, he's miffed that Clare won't give him besitos, because, you know, she's not allowed to say "no" to him.

We may never know what was really said in that chopper, but rest assured, it's not something Clare wanted to hear. On the bright side, it provided Clare a chance to speak her mind, something she didn't really do after the ocean sexy-time debacle. She stood up for herself and didn't take any shit from a man who's jerked her around all season...

Until she decided to forgive him and then plan their kids and their future together.

So close, Clare. SO CLOSE.