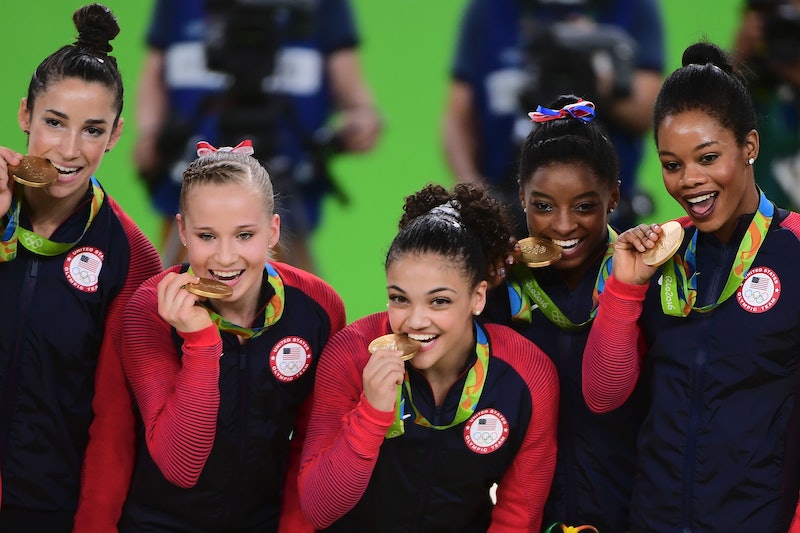 Before we delve into the meaning of the new nickname for the coolest, most athletic gymnastic teenagers the USA has to offer, take a second and think about how awesome these girls are. I'm seriously in awe and that's not just because I can't do a cartwheel (but that does have a lot to do with it). Anyway, back to the topic at hand — the self-proclaimed nickname of the USA Women's Gymnastics Team. The team shouted their new nickname, "The Final Five," hands raised in victory, when gymnast Simone Biles learned her score for her floor routine — a score that meant the team had won the gold for women's team all-around. The name seems a little mysterious what with the choice of the word "Final" instead of "Fantastic," or "Slaytastic," or something else more positive. So, why this choice of nickname — what does The Final Five mean?

The tradition of nicknaming the US gymnastics team after the team wins a gold medal in the women's team competition started at the 1996 games in Atlanta, where the team of seven was known as the Magnificent Seven. Then, in 2012 at the London games, the team was known as the Fierce Five. Now, we've got The Final Five — sounds a bit ominous doesn't it? Well, don't you worry because the two reasons behind the name are innocent and bittersweet all at once.

According to USA Today, the Rio Olympics will be the last games in which a five-person gymnastics team will be allowed. In 2020 in Tokyo, each squad will only have four members. So the name choice is just be a play on the fact that these girls will literally be the final five.

2. This Is The Last Year For Their Coach

According to NBC, the name, which was Biles' idea, symbolizes the fact that this Olympics will be the last for Márta Károlyi, the National Team Coordinator for USA Gymnastics since 2001. They are the "final five" that Károlyi will ever coach — and the fifth team she's led to Olympic victory since 2011. The woman herself was touched by this means of honoring her, telling journalists,

I’m very proud and, yes, I cried. I’m not sentimental, but when Aly told me the name of the team is the Final Five, that is the moment.

Clever nickname aside, this team is incredibly impressive. I can't wait to see what these gold medalists do next.