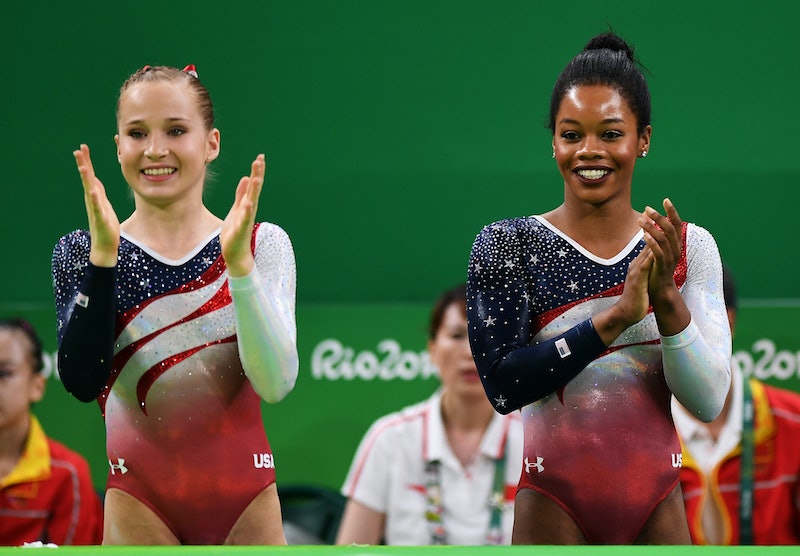 The much-celebrated Team USA secured the gold for the women's team all-around Rio 2016 gymnastics competition, with Russian and China coming in second and third place, respectively. And while you may be familiar with some of the superstars of the team, like Simone Biles and Gabrielle Douglas, these facts about gymnast Madison Kocian prove she's a spectacular talent and superstar in her own right.

The 19-year-old Texas native began training for gymnastics at the age of six, according to Heavy. She's participated in two World Championships, helping the USA teams to two all-around gold medals, as well as earning a gold medal in the 2015 uneven bars World Championship competition. She shared the top score with three other participants from that year's championship, and all three winners were considered co-champions.

And not only did she help her team secure first place at this year's Olympic Games, but she also received the highest uneven bar score, coming in at 15.866. Although she will not participate in Thursday's all-around competition, Kocian, who obtained a one-year deferral from UCLA so that she could train for the 2016 Olympics, definitely made quite an impression in the Rio Games. These facts about Kocian prove the Olympic gymnast has quite an interesting bio, and shouldn't be overlooked.

1. She Just Loves Those Uneven Bars

Kocian, who began training when she was six, displayed a natural affinity for climbing when she was just a baby. According to NBC, Kocian would continuously try to extricate herself from her confines by climbing out of her crib, which prompted her mom to register her for gymnastics classes. She told NBC that her first memory of the sport was at a local gym during her fifth birthday party. From there, the rest is history.

2. She Has Every Intention Of Pursuing Higher Education

3. She Also Plans On Participating In The NCAA

Kocian also plans on participating in the NCAA gymnastics championships as a UCLA student, which makes her the only member of this year's "fierce five" to have the ability to participate in the famed college championships.

Kocian isn't only into tumbles and twirls. She's a major baseball fan, and seemed just thrilled when she met soon-to-be-retired baseball all-star and New York Yankees player Alex Rodriguez, more commonly known as A-Rod. He played for the Texas Rangers from 2000-2004, before joining the Yankees clubhouse. Kocian said in a tweet that he "may be a Yankee now, but he was a star for the Rangers! So cool talking with @AROD last night..He's a great guy."

Kocian helped Team USA earn gold medals in both the 2014 and 2015 World Championships. And not only did she receive the highest score in this year's uneven bars competition, but she also received the top score of 15.366 at the 2015 Glasgow World Championships, along with three other gymnasts.

6. She Came Back From Some Serious Injuries

Call her the comeback kid; you just can't keep Kocian down. After breaking the cartilage growth plate of the radius in her wrist, she was advised to have surgery to fix the fracture. But because she wanted to participate in the 2014 championships, Kocian delayed the surgery until after the competition, in which she helped the USA team earn a gold.

The 2016 "fierce five" may be pretty tough, but they also seem really cool. Coming from really diverse backgrounds, the hyper-competitive atmosphere that can be associated with women's gymnastics competitions seemed to be all but absent from this year's Olympics, and Kocian seems to be fully supportive of her teammates.