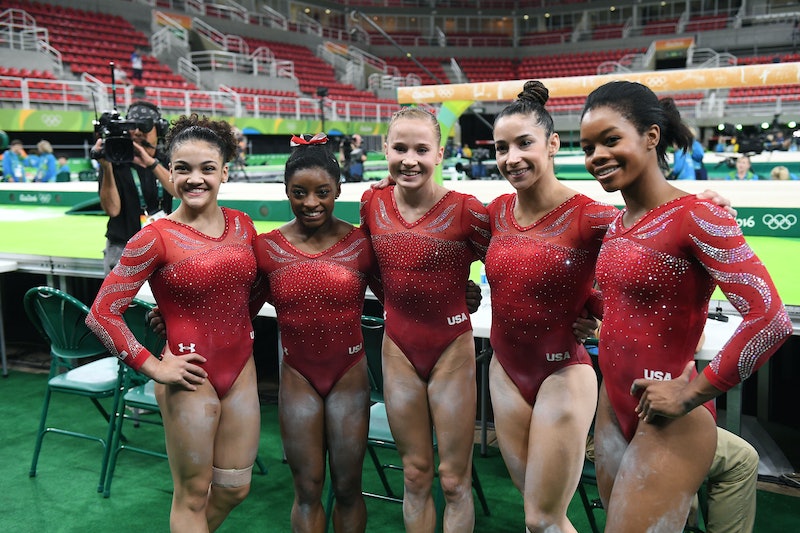 One of the best parts about the 2012 London Olympics was seeing the bonds shared between the Fierce Five: gymnastics stars Jordyn Wieber, Gabby Douglas, Aly Raisman, Kyla Ross, and McKayla Maroney. The five athletes seemed to be truly close, sharing huge hugs and lots of laughs whenever they were seen together on-screen or in social media posts. With the 2016 Rio Olympics underway, though, the original Fierce Five now has some competition when it comes to being #SquadGoals — in the form of the new Fierce Five, this year's crop of female Olympic gymnasts. It truly seems like the members of the U.S. women's gymnastics team are all friends, with bonds close enough to rival that of their London predecessors.

One look at the teammates' social media posts, and you'll see just how tight a group they've become since joining forces as Olympians. Raisman and Douglas were already close thanks to their time spent in London, but Simone Biles, Laurie Hernandez, and Madison Kocian all seem to be BFFs, as well. The five athletes have been constantly posting adorable photos and videos together ever since they were chosen for the Olympic team, from silly snaps of them goofing off in their rooms to more serious posts honoring each other's impressive achievements. Here's a look at some of the team's best BFF moments so far.

When Hernandez Cracked Up Over Raisman's "Model" Walk

The team can't even film an ad together without bursting out into laughter.

When They Were Genuine #SquadGoals

Those shirts are perfect.

When They Went On A Shopping Spree

Hopefully they got some well-deserved fun.

When They Tucked Each Other Into Bed

As BFFs do, of course.

When Raisman And Biles Compared Supplies

Competing with Biles, one of the best gymnasts in the world, doesn't come without its (hilarious) challenges.

When They Rocked The Group Selfie

It takes true friendship to handle a giant group selfie.

When They Made Fun Of Each Other's Goofs

This hang-out turned dangerous, but the team couldn't stop laughing at Hernandez's goof.

When They Became An Actual Family

That #BigSis hashtag is too much.

When They Had Fun With The Photobooth

When They Found Out They Were Going To Rio

Solidarity in its finest form.

It's so great to see that even when they're competing for gold, these teammates still put their friendship first.

More like this
Jake Daniels Just Became The UK’s First Active Football Player To Come Out As Gay Since 1990
By Sam Ramsden
What Is Jeanie Buss' Net Worth? The Lakers President Is Uber Rich
By Hugh McIntyre
Starbucks' Summer Menu Includes A New Chocolate Cream Cold Brew
By Emma Garza
How To Use Circle, Twitter’s Version Of Close Friends
By Emma Carey
Get Even More From Bustle — Sign Up For The Newsletter