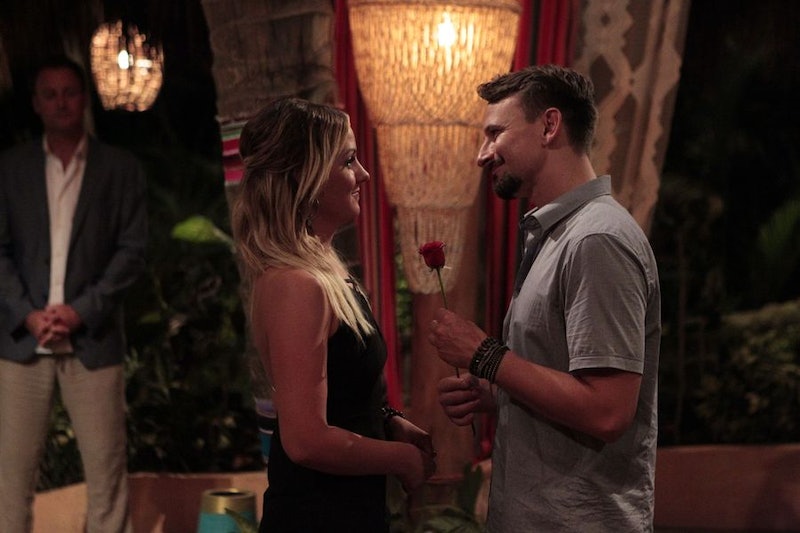 I think Bachelor In Paradise just suffered through its first breakup, everyone! Carly and Evan looked like they could have a love connection, and then, well… Carly decided that she didn’t like Evan anymore. She did her due diligence, though — they had a one-on-one date so that Carly could really decide that she didn’t like Evan. They had to kiss for a whole 90 seconds without moving their lips, which is just way too long to kiss anyone, and then Carly threw up. Seriously. So, Carly had the breakup talk with Evan on Bachelor In Paradise , and it didn’t really go that well.

Carly has been crapping on Evan to the cameras all season long (all three episodes, that is), and, though it’s kind of mean, she’s honest about her feelings. As we know, she literally threw up after kissing Evan. Carly sat Evan down and told him that she has fun with him but they’re really better off being friends. “I’m not interested in you romantically” was the phrase she used. Evan seemed to take it OK, until he walked up the stairs to his room and started crying over their two-day relationship. Evan. Oh, honey. There’s nothing to get upset about.

I mean, Evan’s a sensitive guy, and he’s probably even more angry when he sees all the stuff that Carly was saying about him now, but if someone in your relationship isn’t feeling it, they’re just not feeling it. I can’t blame Carly for that. But I do feel badly for Evan. He was mulling over leaving, since he’s certain he can’t get a date now, but there is still plenty of time left on Bachelor In Paradise, and new people come in all the time. There is hope for you, Evan! Don’t give up!