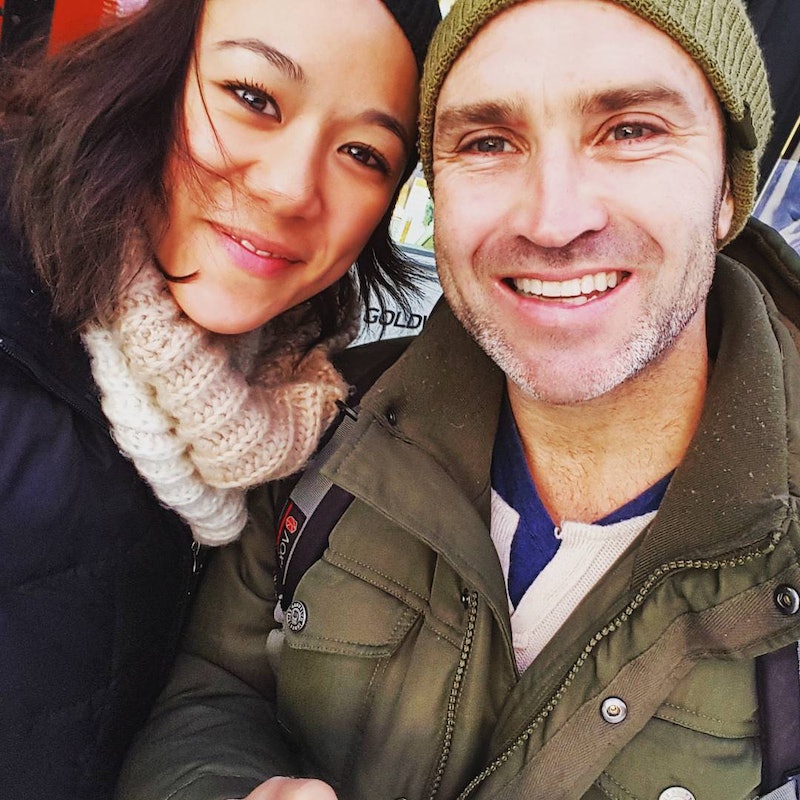 No matter how cynical and commitment-phobic you are, if you're in love with your partner, you want things to last. That doesn't necessarily mean you're shooting for happily ever after (whatever that means), but if you're radiant together, why would you want it to end? That's where the relationship advice comes in.

Even though science will never be able to definitively determine what makes up a successful relationship that will stand the test of time, it can certainly give us an idea of what has worked for people in the past. A study published in the Journal of Personality and Social Psychology showed that couples who react to each other's good news with enthusiasm and genuine interest, rather than indifference, have a lot greater chance of staying together. Also, studies show that a positive attitude from even just one partner boosts the couple's likelihood of lasting. Another big thing that indicates forevermore? How many friends each partner has outside of the relationship. The more, the better.

In my experience, these things have absolutely contributed to a solid relationship with my boyfriend, who I've been with for more than two and a half years. But it's the unscientific advice below that I've accumulated along the way that's actually proven to be the most useful.

1. Be As Kind To Each Other As You Were The Day You Met

A friend of mine once told me that her marriage has stood the test of time simply because she and her husband try their best to be intentionally nice to each other on the regular. By refraining from constant criticism and instead opting in for positive reinforcement, they reduce the risk of growing to dislike each other. Plus, even the smallest of compliments or gestures are, if nothing else, a great way to show your love for each other. I scooped up her advice the second she put on the table and, let me tell you, it's a simple instruction that can work wonders.

2. Argue About One Thing At A Time

Happy couples fight right, something I've learned both through experience and research. However, I've also received another little tidbit about arguing that's been a lifesaver: only fight about one issue at a time. When you're in the middle of a heated argument, the easy way out is to bring up all the things your SO has done wrong over the last year in order to get them to apologize. Rounding up all of each other's mistakes gets you nowhere, though — you just end up going in circles until you're both blue in the face.

Although this one is a really tough one to execute, I've found that it's really worth it. It makes it much easier for us to actually resolve a fight, rather than yell at each other for hours and forget what truly made us upset in the first place.

3. Do Favors For Each Other (And Not Just The Dirty Kind)

When you first start dating someone, you'll do pretty much anything for them. When they ask you to pick up some special hot sauce from Trader Joe's on the way home, you do it in a heartbeat, even if it's out of your way. As time moves things along, though, you're much less likely to be so giving, and that's when motivational speaker and author Tony Robbins says things start to go down the drain.

Don't get me wrong. You're supposed to love and take care of yourself first and foremost, but in my relationship, I've found that the more I selflessly give my time and energy to my boyfriend, the more he does the same for me, and the happier we are together. It sounds super cheesy, I admit, but it's true. For example, if he's really exhausted after a long day of work, I'll unpack his bag for him, fold up his laundry, and ask if he wants a glass of wine. Then, when I'm feeling crappy a few days later, he brings me a cup of chai tea and my favorite bar of chocolate, and offers to give me a foot rub while I watch Netflix. It's a pretty sweet exchange.

4. Take Time Apart Whenever You Get The Chance

Have you ever wondered what Helen Mirren's key is to a happy, lasting relationship? "Spending a lot of time apart," apparently. She and her hubby have been together for nearly two decades and swear by this tidbit. My SO and I are also really good at this, if I may say so myself, and I'm convinced it's the key to us still feeling like we're in the honeymoon phase. Every few months one of us will take a little trip (or we both will), even if it's an hour away to see a friend who lives in the next town over for the weekend.

We end up missing each other and calling each other like lovesick teenagers. Plus, when we're finally reunited, things get steamy. More importantly, though, this little game allows us to keep our own sense of independence, which is crucial for us to staying happy with ourselves.

5. Don't Answer To Anyone But Each Other

A therapist I once worked with told me that worrying a lot about what other people think can be very destructive to a relationship. She suggested my boyfriend and I forget about what the people around us want for us, and instead jot down what we want from each other and from our lives.

Now, when we feel pressure from the outside to get married or have kids or a certain type of job, we come back to these promises and remind each other that we're the only ones we have to answer to at the end of the day.

6. Cool Down Before You Sit Down For A Serious Talk

Nine times out of ten, when something nearly unforgivable is said, it's done out of hot and heavy anger. To avoid spouting the worst possible things at one another, someone once told me to walk away when I'm mad and only come back after I've calmed down. When put into practice, it works wonders. Getting all the strong emotions out of the way before we talk helps us move through the conversation quicker than we would if we came to the table boiling with anger.

7. Never Put Each Other Down In Public

Although there's nothing wrong with innocent teasing every now and then, it's a different beast entirely to embarrass each other when you're in social settings. You should be each other's biggest fans, not one another's enemies. Even if you're not having the best day together, my mom taught me that the worst thing you can do is treat each other like crap in public. Not only does it make everyone else feel uncomfortable as hell, it makes things way, way worse between the two of you.

If there's no laughter, there's no life to the relationship. I doubt there are very many happy, longterm couples out there who don't joke around with each other often and keep things light. I've heard from multiple people that laughing is the key to any healthy romantic relationship, and science agrees. Studies have shown that couples who laugh together more often are happier and more likely to stay together for a long, long time.

If there's anything my partner and I know how to do, it's kick back and have a chuckle (well, that and eat). Things don't seem to be slowing down anytime soon, so I'm guessing the giggles are doing us some good.