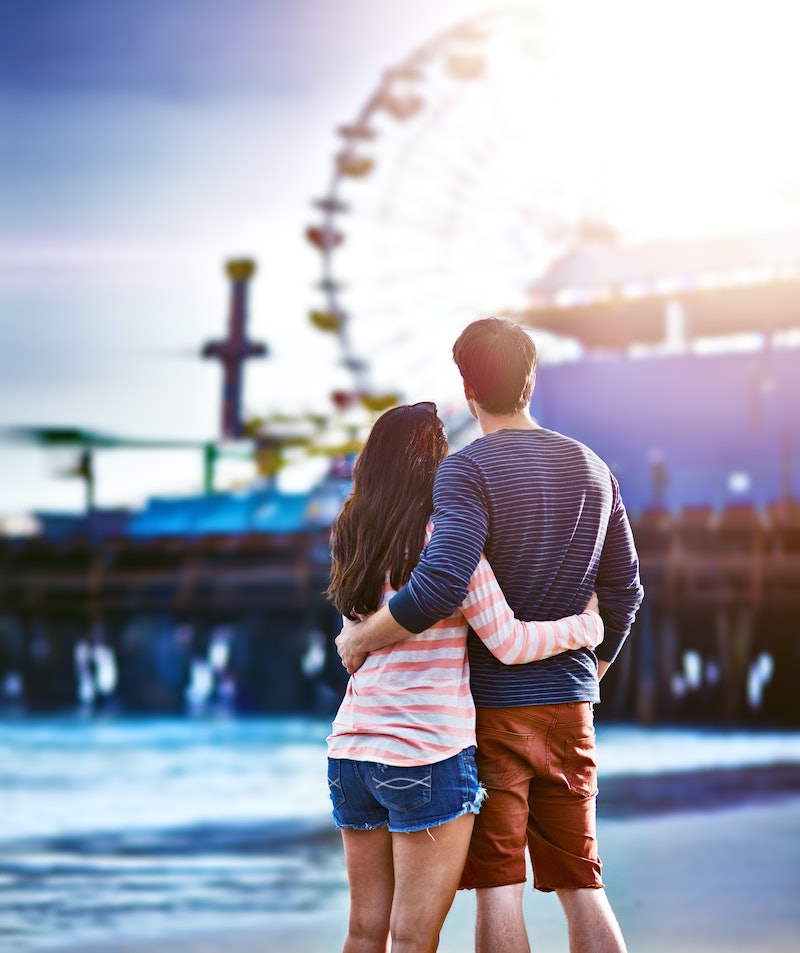 First, let me get the disclaimer out of the way: My relationship is far from perfect. Like, very far. In fact, I'm writing this article, in large part, to remind myself of what I can do to strengthen my relationship after a particularly trying time with my boyfriend Alex.

After a month of over-booked schedules, visits from family members, health scares, and delayed conversations, everything seemed to suddenly escalate to nuclear option-levels between us. All of the little issues had built up to create a seemingly insurmountable mountain of doubts: How could we feel so disconnected? Shouldn't "true" love be easy? How do we really know we're right for each other?

After a lot of hard talking, one of the main things we realized was that despite spending plenty of time together, we'd been neglecting taking care of the health of our relationship. We hadn't been setting aside the time to be alone, to talk — or even to play. As a result, we'd been feeling more and more disconnected from each other, and lost a sense of empathy for what the other person was going through when things got rough. It was an understandable, if rookie mistake.

Relationships that are healthy are always growing and shifting — and therefore, by their very nature, are always actually pretty uncomfortable. There is no plateau we reach (hopefully) where we cease to change or challenge each other. The result can be exciting but also unsettling — how do you ride the waves of each other's moods, phases, and major life events without growing apart?

Well, I have next-to-no idea. But I do know that when it comes to my current relationship, this is the first time I've really wanted to try to figure it out. And when it comes to maintaining intimacy and empathy with each other, Alex and I have found that certain small things can make a very big difference.

Here are nine things we do that help us continue to grow closer. Perhaps they'll work for you, or give you inspiration when it comes to this crazy little thing called love.

I came up with the idea for "My Team" because of a game kids used to play in middle school called "Your Team." The idea behind Your Team is simple, if most definitely cruel — as you see losers or weirdos on the street, you call them for the other person's team, as if to say "look at that ugly dude, he's on your team." One day, I had the idea to start playing a game called "My Team" instead, with Alex.

The game is simple: We are constantly on the lookout for awesome people around us to call for "our team." (And as it turns out, many of those awesome people were probably once dubbed the losers in middle school.) The game has no end, and only one rule: The other person has to be able to see the team member you're calling.

My Team is a great game because it makes you approach an everyday train ride or walk around the neighborhood together with a sense of presence and appreciation. Sometimes, if I'm feeling especially generous, I'll point out a little kid on a scooter that has Alex's Team written all over him. Other times, we'll both rush to snag an elderly couple sharing a newspaper. Either way, we both win.

We got this idea from our one pair of married friends. At first, when they told us they switch off planning Friday night dates every week, I thought the idea was cute, if a bit middle-aged. Alternating date nights? Isn't that something you do when romance is dead? Nope, turns out, they're onto something.

As we all know, when you get into a long-term relationship, it's easy to fall into comfortable ruts. Sometimes, you miss being taken out on dates, and if you're a straight woman, it's especially easy to place all the responsibility for romance on the guy (thanks rom-coms!), which is unfair to both of you.

By alternating weekly date nights, you have the chance to take the other person out and share something you would find fun with them. It doesn't have to be fancy either. I've found that all that really matters to me is that someone has put some thought into where they'd like to take me, or what they'd like to share. Create a Google calendar reoccurring event to remind you whose turn it is, and when the reminder pops up every Thursday, you'll know it's almost the freakin' weekend.

Try Staring into the Other Person's Eyes for Two Minutes

This one is going to feel really weird at first. You might think that you look into your boo's eyes all the time, but chances are, you don't hold sustained, direct eye contact — even during sex — for more than a few seconds.

If you can sit facing each other and see if you can look into each other's eyes for two minutes — without laughing — you are going to build some major intimacy and trust. You'd think it'd be easy, but it's a humbling exercise, to say the least.

Assign Each Other an Art Project

One of my favorite memories of our early relationship is a rainy day Alex and I spent together when we assigned each other an art project to work on for a few hours. Because Alex likes photography, I gave him a list of words (like "blue," "love," and "home") and told him to take a photograph that represented each word to him. In turn, he assigned me a word to write a poem around. We then shared what we'd made when we were done.

Every awesome couple I've met is great at spending this kind of separate alone time together, and it's because it allows for so much space and intimacy at the same time. This is a great way to practice, while fostering your own sense of creativity.

Yes, picking out a meal to cook together is great, but sometimes, just going food shopping together can be really fun. Try playing a game together where you go through the grocery store and pick out three items to buy for the other person that you think they'd like. Taking the time to pick out something for your partner to eat helps you empathize with their needs more, and your partner will appreciate you exposing them to something new. (Especially if it involves chocolate.)

Isn't it crazy that in relationships we're often too busy and/or scared to check in with each other about how the relationship itself is going? When Alex and I forget to check in with each other, I find that small stuff tends to get buried and pile up, only to explode at a later, inconvenient time. It makes sense — it can be intimidating to talk about your partnership, especially if you're doing well. Why stir stuff up? What if it leads to a fight?

One great way to make talking about the State of Your Union less intimidating is to schedule weekly check-ins with each other. It sounds weird, but you can make it a little tradition, something you do for the health of your relationship.

Here's how to do it: In my experience, the most effective way to do a check-in is to sit facing each other, either cross-legged, or on chairs. One person can speak first, while the other simply listens. They say whatever is on their mind, for however long they want, until they're done. They try to speak honestly and mindfully about whatever it is they are feeling in that moment, and how they are feeling about the relationship. The other person just listens. Then you switch. Afterwards, you take the same spirit of listening, but transition into a conversation.

You'd think it would lead to a fight or an airing of resentments, and yes, sometimes that can happen. But if you approach the exercise with an open and loving attitude, it can actually build an incredible amount of intimacy and help avoid future arguments. Because each person gets a chance to feel fully heard and to air any feelings they've been having out loud, don't be surprised if you leave the exercise with an incredible sense of lightness and relief.

Read Out Loud To Each Other

There is something so damn cozy about reading out loud or being read to, isn't there? Alex and I have been making our slow way for the same book for quite a few months now, but every time he cozies up to me to listen to another chapter, I feel close to him in a way that not even the finest of big spoons can achieve. Must be a childhood thing.

This one is hard for me, but I'm always glad after the fact when Alex encourages me to take some space. Sometimes, the best way to appreciate your partner is to take some distance from them. That can happen organically, but it can also happen more deliberately. You can choose to take yourself on a romantic date alone, or stay in and binge-watch a show rather than going to that party with your partner you'd feel dragged to.

The more you spend time with your SO because you want to — not because you're obligated to or have automatic plans every Friday night — the more you're likely to appreciate them and stop viewing them as a sort of breathing ottoman.

At Least Once a Month, Make Plans to Have No Plans

Some of my favorite days — both alone and in a relationship — are the days when I make plans to have no plans for the entire day. Block out a Sunday with your partner without obligations, and promise each other that you won't force the other to do one. single. thing.

Perhaps you'll both feel like having a sex marathon, or you'll want to take an aimless walk around your neighborhood that lasts all day. Either way, blocking out a day without any obligation — besides to spend time together — is incredibly liberating and relaxing. It will help you reconnect to that early sense of magic and adventure that made you fall in love in the first place. When you don't make plans, suddenly, the world is new again, and so is your partner. And both, as it turns out, are pretty damn wonderful.