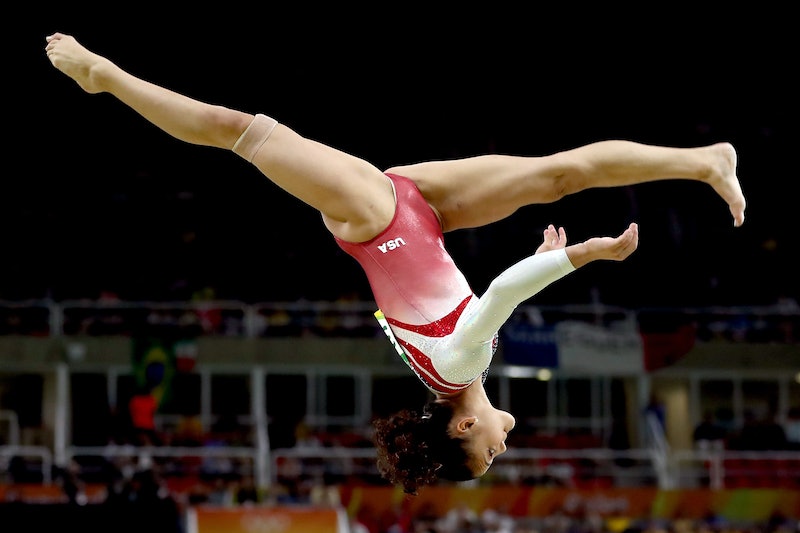 Given the incredible nature of each member of the U.S. women's gymnastics team, it's no wonder that the girls are already being called the "Final Five." One breakout star at the 2016 Olympics in Rio happens to be the team's youngest member. At only 16, she's wowed crowds with her skills and spunk. Above all, it was first-time Olympian Laurie Hernandez's incredible floor routine which had fans across the U.S. and around the world cheering for the high schooler from New Jersey.

Hernandez worked the crowd on Tuesday night in her stunning floor routine, as she helped Team USA win 184.897 points — a wide margin, given that gymnastics is scored by fractions of a point. Ultimately, the team won 8.209 more points than Russia, their closest opponent. And to top it off, Hernandez winked at the judges, surely leaving them as spellbound as the rest of the world.

Once called "Baby Shakira" by a podcast host for her amazing sense of rhythm and Latina heritage, Hernandez, whose grandparents were from Puerto Rico, is the first American Latina to make the U.S. women's gymnastic team since Tracee Talavera, who competed in the 1984 Olympics in Los Angeles.

When watching her amazing floor routine, it's easy to see why the world is so enamored of Hernandez and her moves. You can watch her entire floor routine via NBC Sports' YouTube channel here.

Hernandez's style is a welcome departure from other floor routines of the past — so much so that one commentator believes Hernandez can save gymnastic dance from the overly technical routines exhibited by otherwise talented gymnasts. In other words, Hernandez is helping to bring artistic flair back to the competition.

Jessica O'Bierne, the podcaster who dubbed Hernandez "Baby Shakira" in 2013 (when Hernandez was a mere 13 years old), overflowed with praise when she discussed the young gymnast's moves on her podcast, Gymcastic:

You lit up the whole room. It was like, when you were on the floor, it was like Beyonce and Michael Jackson and Shakira all showed up at once and started doing gymnastics.

While the accolades may seem over the top when applied to anyone else, it makes a sort of hilarious sense for Hernandez, who chose a mix of retro and modern music to accompany her moves in Rio.

The dancing is, of course, just one aspect of the spirit that Hernandez brought to her floor routine. Like her wink to the judges, Hernandez's entire being seemed filled with some joie de vivre (the girl's so good that I can only describe her in French), and every twirl, flip, and hip thrust sent that same sense of joy through the crowd. While she won't be advancing to the finals due to the two-per-country rule for gymnastics, Hernandez is clearly one of the standout stars — not only in gymnastics, but also in these Olympics at large.