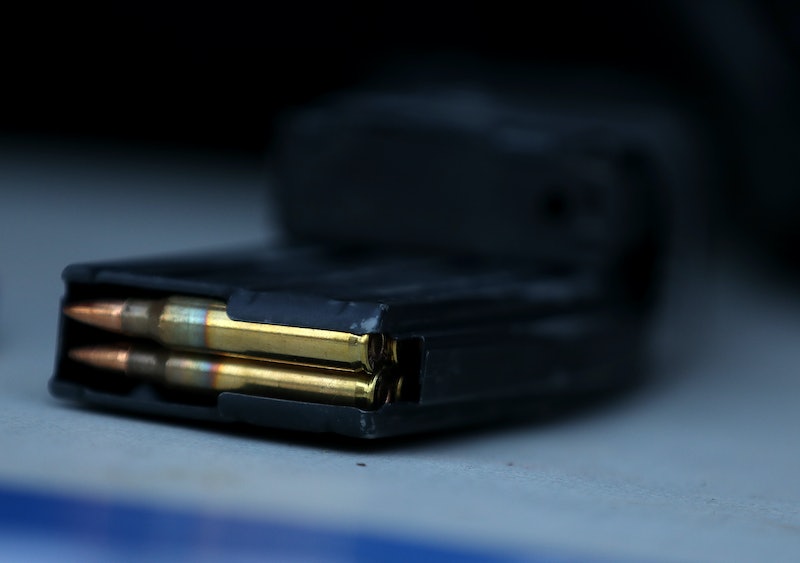 So you’re at a party, and someone says something ignorant. And while you know that they’re in the wrong, and that you could totally engage them and win if you were a bit more prepared, your words escape you. To make sure that doesn’t happen, we’ve compiled a series of handy reference guides with the most common arguments — and your counter-arguments — for all of the hot-button issues of the day. This week’s topic: How to argue for gun control.

Your Response: The Second Amendment says “A well-regulated militia being necessary to the security of a free State, the right of the people to keep and bear Arms shall not be infringed.” Are you really arguing that, in the 21st century, citizen militias are necessary to secure American sovereignty? If so, you’re clearly unfamiliar with how powerful the U.S. military is.

In any event, if you think the Second Amendment prohibits any and all restrictions on gun possession in the U.S. no matter what the circumstances, then you must believe that convicted murderers have the right to carry machine guns in prison. Right?

Common Argument #2: You know who else took people’s guns away? Adolph Hitler.

Your Response: No, Hitler actually relaxed gun control laws in Germany. You’re probably referring to the Weapons Law of 1938, which Hitler signed, but that was a deregulation of guns in Germany. The Weapons Law eliminated permit requirements for shotguns, rifles, and ammunition, which opened the door for unregulated sales of all weapons other than handguns. Hitler also made more people eligible for permits, lowered the age limit for gun ownership from 20 to 18, and extended the length of gun permits’ validity from one year to three. In an extensive 2004 study on the topic, Bernard E. Harcourt concluded that “the Nazi regime relaxed the gun laws that were in place in Germany at the time the Nazis seized power.”

Common Argument #3: Citizens have the right to defend themselves against a tyrannical government.

Your Response: There’s no easy way to say this, so let’s just say it: If you believe that your personal firearms are any match for the firepower that the American government has at its disposal, you are deluded. If you believe that any group of private U.S. citizens would be able to accumulate the weaponry necessary to stand up to the U.S. military in an armed conflict, you need to step back, take a deep breath, and acknowledge objective reality.

The U.S. military has, among other things, invisible tanks, hydrogen bombs, one-handed shotguns, blindness rifles, remote-controlled grenade launchers, unmanned drones, and a wave gun so powerful that it’s been nicknamed “The Goodbye Weapon.” You may not like the fact that an armed domestic resistance against the American government would essentially be impossible, but it’s a fact nonetheless. Deregulating gun laws will not change this fact, unless your idea of deregulating gun laws is to make rocket launchers available and affordable to the entire U.S. population.

There is an argument to be made that the government spends way too much money on weapons, but that's a completely separate argument from gun control.

Common Argument #4: If you outlaw guns, only outlaws will have them.

Your Response: I’m not arguing that we should outlaw guns. I’m saying we should erect legal barriers that make it more difficult for individuals with a higher propensity for violence, such as convicted felons or the mentally ill, to obtain guns.

Look at the National Instant Criminal Background Check System (NICS). It was enacted in 1994 and established, among other things, a centralized database of individuals who are federally prohibited from buying guns — namely, convicted felons, domestic abusers, and fugitives. It’s one of the most significant gun control laws in American history, and since it was put into place, 2.1 million outlaws have been blocked from purchasing guns. So really, gun control does the opposite of your argument.

Your Response: Actually, most studies suggest that gun laws reduce violence. In the United States, the South consistently has more deaths by assault than any other region. It also has the most lenient gun control laws. A Harvard study from last year showed that between 2007 and 2010, states with fewer gun control laws generally had higher gun-related mortality rates than states with stricter gun control. Another study published in the Journal of the American Medical Association confirmed that finding; and a meta-analysis of other studies, also from Harvard, showed that higher gun ownership rates was correlated with higher homicide rates, both within the U.S. and amongst different high-income countries.

What’s indisputable is that the amount of gun-related deaths in the U.S., which has the highest rate of private gun ownership in the world, is appalling. On average, there is a mass shooting every day in America. Around 12,000 people in the U.S. were killed by guns in 2013, or over 30 people per day, and in the year after the Newtown massacre, over 200 children have been shot to death. The average age of those child victims was six years old. On the whole, the U.S. has more firearm homicides per capita than anywhere else on the planet.

That sounds pretty unsafe to me.