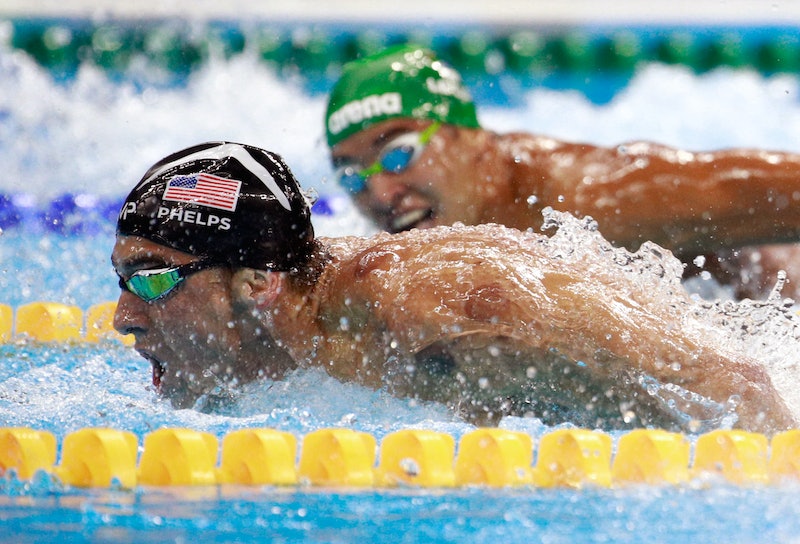 In one of the best, if slightly unsettling, memes to come out of the 2016 Olympics, Michael Phelps is staring down Chad le Clos as the South African swimmer dances in front of him prior to the 200-meter butterfly semi-final. Combine this with Phelps' taunting finger wag after winning gold in the final on Tuesday — beating out le Clos for the No. 1 spot and earning his historic 20th gold medal — and it's clear to anyone tuning in that there is a rivalry between Phelps and le Clos. What's the deal?

When the stakes are as high as the Olympics, it's expected that there will be some serious competition between swimmers — but things weren't always so tense between Phelps and le Clos. In fact, at the 2012 London Olympics, le Clos, who beat Phelps for the gold in the 200M butterfly that year, mentioned that Phelps had been a hero of his growing up ("He was the reason I swam the butterfly," the swimmer said at the time, the New York Times reports. "It's not a joke."). Still, le Clos' shocking win — SB Nation notes that it was Phelps' only loss in the 200M butterfly in a decade — set the stage for the rivalry that has existed between these two ever since.

After Phelps came out of retirement, he revealed in 2014 that he was specifically going for the gold in the 200M fly because he saw the competition as slow, NBC reports. The shade was real, but le Clos was ready for it.

"He’s been talking a lot of smack in the media about how slow the butterfly is, so I just can’t wait until I race him," he said at the 2015 World Championships — later commenting that Phelps "can keep quiet now" after he scored big in the 100M race.

"I just did a 100M butterfly time that Phelps hasn’t done in four years, so he can keep quiet now," le Clos said.

For his part, Phelps just laughed off le Clos' comments.

"Chad liked me, and then he didn’t like me," he told the New York Times. "He said I was his hero, and then he was calling me out. ... The comments were interesting. It just fuels me. If you want to do it, go for it. I welcome it."

After beating le Clos in the 200M on Tuesday (the South African swimmer came in fourth and therefore didn't medal), Phelps was clearly satisfied with his win, later taking to social media to voice just how happy he was about his victory.

"I wanted that one so bad last night," he wrote.

Phelps and le Clos will once again face off in the pool in the 100M butterfly on Thursday, which means that the rivalry will continue in Rio — at least until tomorrow.