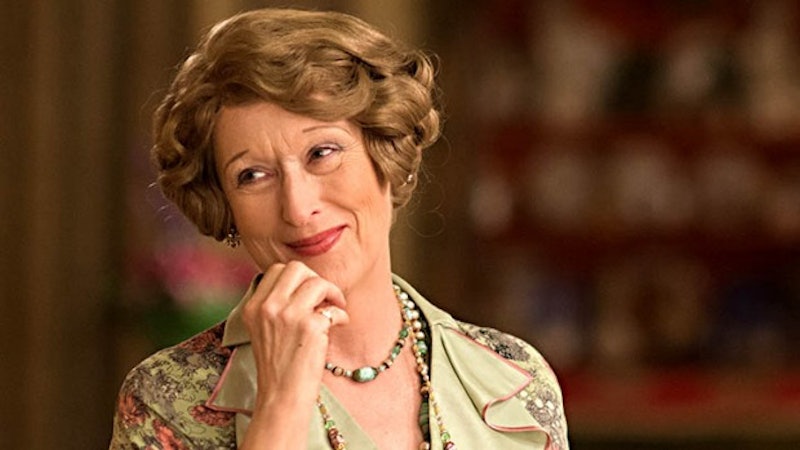 By now, you must have heard... er... some bad singing. It's no secret that the incomparable Meryl Streep is starring in a new film called Florence Foster Jenkins, and it's also been said that Streep sings in the movie — badly. The actor plays Jenkins, a real, inspiring woman who had a dream to perform at Carnegie Hall, and despite her lack of sining ability, she did it anyway. And while you'll be able to hear Streep sing as Jenkins in the film, there are also recordings of the real life Florence Foster Jenkins' Carnegie Hall performance you can hear to compare.

Carnegie Hall has an archival recording of Jenkins' original performance, but sadly, it's not available to listen to online (you'd likely have to go to the actual concert hall to find it). Yet even though you can't listen to the original performance easily, I can confirm that Jenkins performed most of her popular recordings at the Carnegie Hall performance. And it just so happens that many of Jenkins' recordings are available to purchase or stream online, just not those sang at the actual concert space.

While many have dubbed Jenkins as "the world's worst singer," that's not quite fair; there are far worse singers out there. Nevertheless, Jenkins did struggle with pitch, tone, and overall ability, but honestly, who cares? Sure, she's no Celine Dion, but her perseverance and her belief in herself makes her someone worth respecting and remembering. Sadly, like I said before, there's no one recording of her Carnegie Hall performance available online, but luckily, many of her other songs are available both to purchase on iTunes and Amazon, and to stream on Spotify. And to get a little sense of what Jenkins' performance at Carnegie Hall was like, here are two of her most notable recordings:

Are you OK? Still alive? Ears not bleeding? Good. Because while Jenkins maybe lacked natural ability, you can hear that she definitely was enjoying herself while singing. If your interest is now piqued, check out more of Jenkins' recordings on Spotify, or even purchase some of them. She performed most of her recorded hits at Carnegie Hall, so if you listen to enough of them, you might be able to pretend you were there.