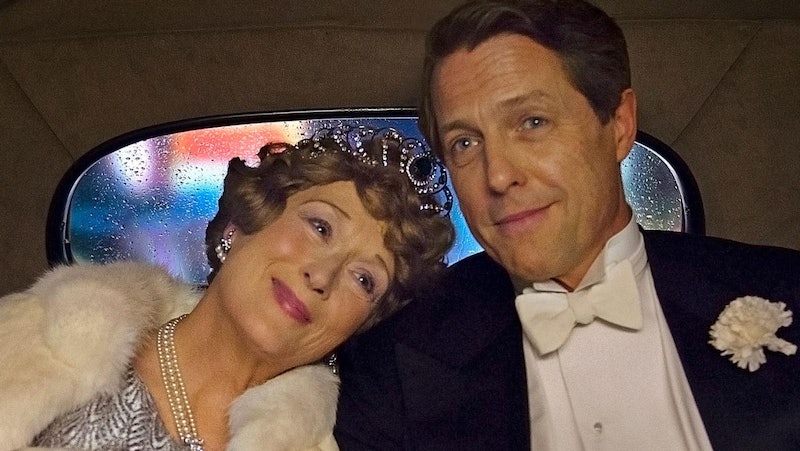 Thomas Edison famously declared that genius is "one percent inspiration and 99 percent perspiration." And though hard work is undoubtedly the fuel of many successes, Edison didn't leave space for pure, unbridled enthusiasm. In the biopic Florence Foster Jenkins , Meryl Streep plays a spirited heiress who doesn't let her lack of talent stop her from seeking musical glory. Hugh Grant co-stars as the aspiring opera singer's husband St. Clair Bayfield, and The Big Bang Theory ensemble member Simon Helberg plays her loyal accompanist, Cosmé McMoon. Streep has shown off her own first-rate pipes in movie musicals like Mamma Mia! and Into The Woods. But could the three-time Oscar winner get on the level of a real-life legend in the field of really bad singing? Of course she could. Yes, Streep really sings in Florence Foster Jenkins , and it quite a feat.

Like Cameron in Modern Family , I think that "Meryl Streep could play Batman and be the right choice." Even still, I was sufficiently impressed by the way she rose musically to her role as the Witch in the 2014 film adaptation of the Stephen Sondheim musical Into The Woods. Sondheim scores aren't known for their simplicity, and she was following in the footsteps of Broadway legends like Bernadette Peters and Donna Murphy. And though that's a technically challenging score, it isn't quite opera. So in taking on the Florence Foster Jenkins lead, Streep had two mountains to climb: first, to re-learn how to sing opera; second, to commit to doing it poorly.

Revisiting opera was like reconnecting with an old friend, apparently. Streep told Radio Times about abandoning the art form young in favor of a good time. She said:

I feel like I’m a B, B+ singer – I’m very well aware of my limitations. Much as I would have liked to be a good singer after I began studying opera as a child, I gave it up very early and sort of ruined my voice with smoking, drinking and debauchery.

According to Newsday, Streep found just the professional to help her develop her vocal performance for the film through renowned Broadway actor and singer Audra McDonald. Music professor Arthur Levy worked with Streep two times a week for four months leading up to the Florence Foster Jenkins shoot and was stunned by the actress's dedication. First up, they worked through the real pieces sincerely. Next, they added the layer of the heiress's signature screw-ups. "These arias are no joke, even if you’re singing off-key," Levy said. "Especially off-key, which strains the voice.”

In a project that's about the power of passion over technique, lip-synced performance scenes would have dulled that message. Streep did not mouth along to backing tracks during filming, nor did Helberg (a skilled pianist in real life) simply mime tickling the ivories. Helberg gave credit to Streep for that choice in The Huffington Post. He said:

Meryl’s idea was to sing live possibly...I think for both of us it was a big challenge and it was technically complicated but it also was kind of amazing really, because what you’re watching is what we were doing and I think that is why those scenes feel real and authentic.

The one and only time Meryl Streep has given anything but a superb performance, and she's doing it on purpose.