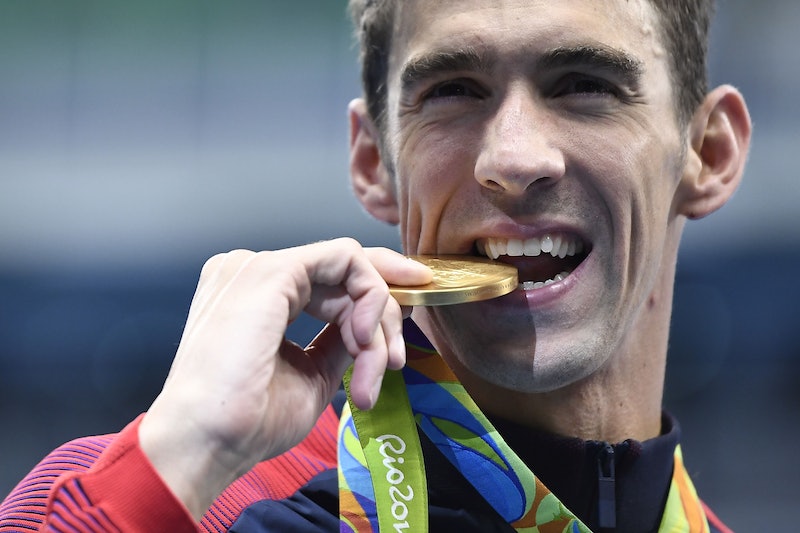 With the Olympics in full swing, all eyes are on Michael Phelps and for a very good reason. But, in case you thought he only had talent as a swimmer, think again. Michael Phelps's cameo in Entourage is just brilliant, and it'll make you wish he had more screen time. Having won the most Olympic medals of any athlete of all time, the 31-year-old is basically a legend, and it seems likely that he's going to repeat his success and add to his medal collection in Rio in 2016. For instance, at the 2008 Beijing Games, Phelps won eight gold medals. The multi-award-winning swimmer makes me feel incredibly lazy. So let's all take a moment to remember the time Michael Phelps got the gold medal in acting (#sorrynotsorry) for his one super memorable line in Season 5, Episode 12 of HBO's Entourage.

It might not seem like much, but the athlete gives everything he has in his single line performance, and it'll most definitely make you wonder why he hasn't appeared on more TV shows. Hopefully, following his performance in the 2016 Rio Games, Michael Phelps will be making many more media appearances as, I think you'll agree, he deserves more screen time than this.

While you might want to dismiss this as a blink-an-you'll-miss-it style cameo, it's worth looking a little closer. The very fact that Michael Phelps appears on Entourage is impressive, especially since it's in such an understated cameo. As a world class athlete with some serious credentials to his name, it's funny to see him on screen, passing some of the show's key characters on the street. When he bumps into Eric, played by Kevin Connolly, he exclaims, "Yo, watch out man. What's up?"

In the scene, Eric is talking on his mobile phone and not paying any attention to where he's going. The fact that he bumps into Olympic swimmer Phelps is just brilliant, as it's so unexpected. He pays so little attention to who he's just bumped into, it feels like a nod to the audience. Sure, Entourage lives in a world of famous people, so it's nothing to the characters to rub elbows with another one, but my eyes would have bugged out of my head.

Phelps is sure to outdo his performance in Entourage time and time again at the 2016 Rio Games. After all, this is the man who was the most successful athlete for three consecutive Olympic Games. The fact that he can also technically put actor on his resume is just icing on the cake.