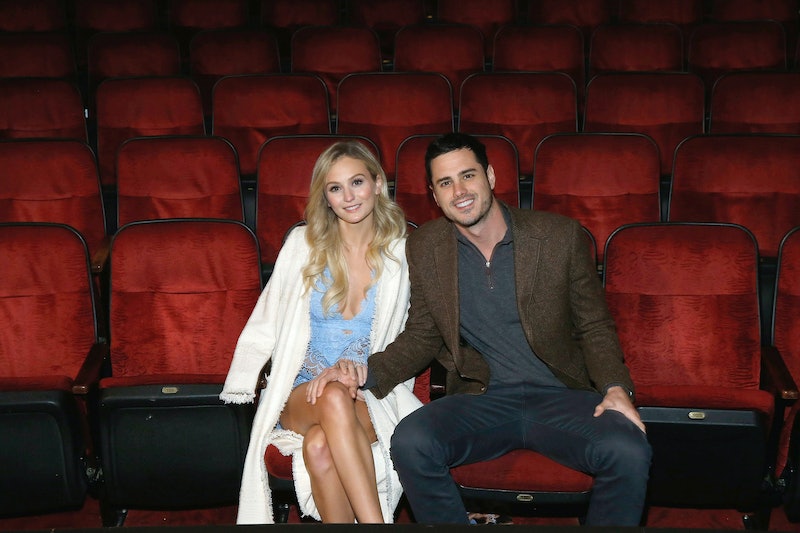 Ben Higgins and Lauren Bushnell are doing something a little different following their time in the Bachelor franchise by filming their own spinoff series. And surely, fans want to know what to expect when the show airs. In the trailer for Ben and Lauren: Happily Ever After? , Ben says "We survived The Bachelor. Now it's time for real life." I still didn't know what that meant — having a camera crew follow you around doesn't exactly constitute "real life" — but through social media and paparazzi pictures, it's not too difficult to guess what fans can expect from Ben and Lauren's show.

Obviously there will be a lot more footage than the time allotted to air the episodes, so I'm sure there will be some gems that end up on the cutting room floor. Nevertheless, there is some good stuff that I can't see getting cut. And since it seems like Ben and Lauren are currently filming their show, anything we see them doing these days could very well end up on the series.

I have a feeling that we will see some wedding planning, or at the very least some talk about the wedding planning, to set the scene for a Ben and Lauren wedding special to air, but other than that very much expected aspect, it looks like there are going to be a lot of potentially interesting things and some Bachelor Nation cameo appearances.

According to Us Weekly, Lauren and Ben went on a double date with JoJo Fletcher and her winner Jordan Rodgers, which was filmed for the show. This is the one thing that I really want to see even though it is so far from the "reality" of Ben and Lauren's every day life. This had to be such an interesting experience, especially since Ben was a popular topic of conversation during pretty much every single episode of JoJo's Bachelorette season.

2. A Hang Out With Becca Tilley & Chris Soules

I'm still not over this photo of Becca in between her two Bachelor exes, which, as Becca pointed out on Instagram, was taken by Lauren. I would really like to know what went down this night. Was it some sort of weird double date with Ben and Lauren as a couple and then Chris and Becca as exes? Was this planned or just a weird coincidence? This better be on their show.

I would love to see Chris Harrison outside of his role as a host. I want to see him just being candid and having normal conversations with Ben and Lauren that do not involve roses or drama.

4. A Renaissance Fair Complete With Costumes

Dressing in a ridiculous theme is just one of those standard reality TV stunts, like going to see a psychic or getting a makeover. There's no doubt in my mind that there will be plenty of scenes with Ben and Lauren kissing each other in these costumes.

5. Bonding With Their Families

Ben is an only child who loves his parents, so I'm sure that they will be making plenty of adorable appearances to check on their son and future daughter-in-law.

Ben is very involved with multiple charities, so I am sure that he will use this reality TV platform to do something positive promote the organizations that he supports, so his fans can also donate their time and money.

Ben and Lauren are both pretty into sports and most of their pictures are of the two of them at games, so it definitely makes sense to assume that they will be fanning out on Ben and Lauren: Happily Ever After?.

It would be silly for Lauren not to talk about the launch of her lifestyle blog on her TV show.

9. Trips As A Couple

With Lauren's experience as a flight attendant and their growing brand as reality TV celebs, it makes sense that the couple is traveling a lot. These will definitely make it onto the show.

Ben and Lauren really seem like a couple that gets along perfectly. No offense, but their stability as a couple will not draw me in to watch their show. Thankfully, the cameo appearances from Bachelor Nation will be super interesting to see. I would love to see these people interacting when there isn't a rose ceremony pending.

We all know how much Ben and Lauren love each other, and they are not at all shy about sharing it. Expect a lot of PDA on this show.

It will be a nice experience to see Ben and Lauren together while he is not dating multiple other women. Is it October yet?