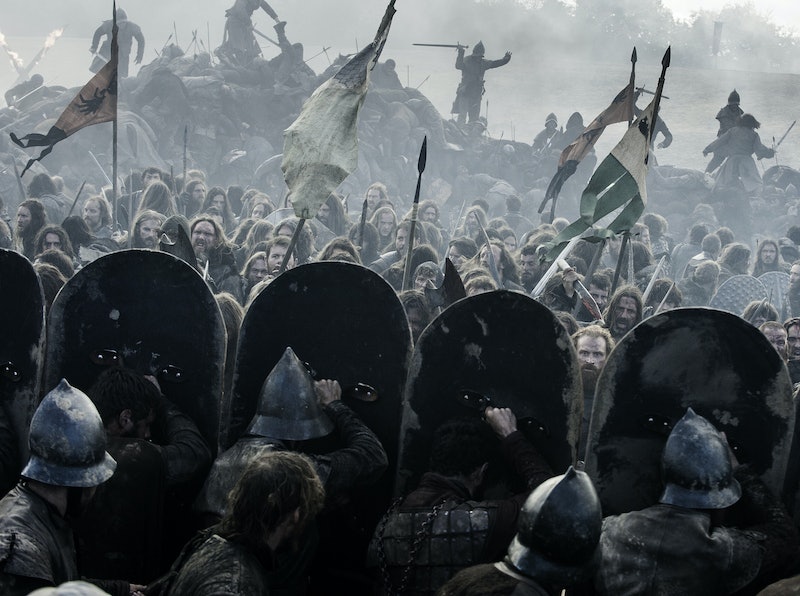 With the persistent rumor that Game Of Thrones will end after two more shortened seasons now a confirmed fact, both the show's loyal audience and its network are likely thinking about what comes next. The fantasy drama has been too big of a ratings hit for HBO for the network execs to want to let it go without a fight; although showrunners David Benioff & D.B. Weiss made the wise choice to end the show before it overstayed its welcome, HBO has to be considering the possibility of producing a Game Of Thrones spinoff.

There have been plenty of theories regarding the plot of a spinoff, most of them involving prequels of some sort: Robert's Rebellion, the Dance of Dragons, the Long Night, the adventures of Dunk and Egg. But while it's fun to speculate, it's fundamentally impossible to predict what a hypothetical offshoot might be about. What's not impossible to predict is what would make a Game Of Thrones spinoff successful in the first place. No matter whether its a prequel or sequel, no matter whether it's based in George R.R. Martin's established lore or an entirely original plot, there are key ingredients a spinoff would need in order to be a worthy successor to Game Of Thrones.

While we pray to the Seven for an official announcement regarding a spinoff, here are seven things HBO should make sure it contains:

1. A Sense Of History

One of the things that makes Game Of Thrones so great is the sense you get that the story started long before the first scene of the first episode. Everything that has happened throughout the six seasons of the show has been informed by events that happened and decisions that were made and struggles that were fought generations ago. A spinoff should continue the show's penchant for rich and complex history.

If it's a sequel, it should tie its plot directly to the events of GoT — not just as fan service, but to promote the idea that "the wheel" (as Daenerys puts it) just keeps on turning. If it's a prequel, it shouldn't feel as though this is the true "beginning" of the story — even events that happened decades or centuries ago still had roots in the history that came before.

If the so-called "Golden Age of Television" was defined by dramas with white male anti-hero leads (The Sopranos' Tony Soprano, Mad Men's Don Draper, Breaking Bad's Walter White), then GoT has distinguished itself in the post-Golden Age era with its huge ensemble cast filled with some of the most dynamic female characters on all of television. The show literally disposed of its nominal white male lead in the first season, and since then characters like Cersei, Daenerys, Sansa, Arya, Margaery, Brienne, Melisandre, and Asha have risen to take his place.

Some of those characters have been made even more complex than they were on the page (Cersei, Margaery); some have been less so (the Sand Snakes, the conspicuously absent Arianne Martell); some have fallen somewhere in between (Sansa, shifting back and forth from perennial victim to master manipulator). Hopefully HBO will learn from what went well and what didn't when crafting their spinoff's female characters.

For the most part, GoT has always nailed its villains, from the homicidally petulant King Joffrey to the cool and collected Twyin Lannister, from the chillingly pragmatic Roose Bolton to the smugly zealous High Sparrow.

Of course, Roose's bastard Ramsay was the exception to GoT's run of terrific bad guys; despite Iwan Rheon's committed performance, the character never transcended the psychotic clichés he was trapped in. GoT's best villains have complex motivations and traits that make them weirdly likable. (See also: Sandor Clegane.) Any spinoff will need an antagonist who will keep us on our toes — not just someone who will gruesomely murder anyone who annoys him.

Other than the apperance of White Walkers in the premiere's prologue, Season 1 of GoT was almost more of a political drama than a fantasy series. It wasn't until the birth of Dany's dragons that magic started seeping back into the world and — now that it had a reliable built-in audience — the show felt confident enough to indulge in shadow monsters and resurrections and prophecies and elves and face-changing assassins and time travel.

Now that magic is firmly a part of GoT's DNA, the spinoff shouldn't be afraid to fully embrace the more fantastical aspects of the series, whether it takes place in the past, before the dragons died out, or in the future, after magic has made its triumphant return. Fantasy has not typically been a very successful genre on the small screen, so it will be great to see the spinoff let its freak flag fly.

One of the most thrilling parts of GoT has been watching the map literally expand over the course of six seasons, from the few static locations of Season 1 (Winterfell, King's Landing, the Wall, the Dothraki sea) to such far-flung locales as Dragonstone, the Iron Islands, Dorne, Braavos, Slaver's Bay, and the Land of Always Winter.

That's why I'm personally hoping the spinoff isn't about Robert's Rebellion; not only is it the historical event we already know the most about — talked about at length throughout the series — but it would also take place at all of the same locations we've already seen throughout GoT. I'd much rather see a spinoff take us somewhere exotic and new like Asshai with its dark magic, Valyria with its dragon-riding Targaryens, Skagos with its unicorns and cannibals, or Sothoryos and its vast jungles full of dinosaurs and basilisks and vampire bats and deadly plagues.

Of course, no matter where or when the spinoff takes place, it has to be chock-full of terrific actors. GoT wouldn't work nearly as well and it wouldn't have become nearly as popular if it weren't for the work of its huge cast, which is almost uniformly brilliant. Obviously there are the high-profile Emmy nominees like Pete Dinklage (Tyrion), Lena Headey (Cersei), Emilia Clarke (Daenerys), Kit Harington (Jon), and Maisie Williams (Arya); but the entire supporting cast also carries its own weight, with standouts including Sophie Turner (Sansa), Nikolaj Coster-Waldau (Jaime), Gwendoline Christie (Brienne), and Rory McCann (Sandor Clegane). Of course, that's not even mentioning the dearly departed cast members like Sean Bean (Ned), Charles Dance (Tywin), Jack Gleeson (Joffrey), Natalie Dormer (Margaery), or Jonathan Pryce (High Sparrow). I could go on all day.

Whoever joins the cast of the spinoff, they'll also need to be supported by talented artists behind the scenes; the superb direcing, cinematography, design, and music have all been just as instrumental to the show's success as the people in front of the camera. GoT isn't a cheap show for HBO to make, but they certainly shouldn't skimp on the production budget when launching a spinoff.

When Ned Stark got his head cut off at the end of Season 1, it was surprising because it subverted our expectations of the fantasy genre, where the noble protagonist will eventually emerge victorious over his enemies. The Lancelot-esque knight turns out to be an incestuous child-murderer; the grotesque "Imp" turns out to be a kind-hearted scholar; the avenging son turns out to get murdered before he completes his goal. The ways George R.R. Martin twisted the classic fantasy narrative were brilliant.

Subverting expectations is always surprising, but it shouldn't be mistaken for shock value — a mistake GoT has occasionally made in its later seasons. By the dozenth time we've watched Ramsay Bolton murder someone onscreen, it's no longer subverting expectations; it's conforming to them. Obviously, the savvier an audience gets, the harder it is to surprise them. But rather than indulging in lazy shocks, the spinoff should take its time in setting up its viewers' expectations… and then shattering them in unexpected and clever ways.

That's what will keep us tuning in to a Game Of Thrones spinoff week after week; not just the deaths and plot twists, but the patience to tell a complex and engaging story full of dynamic characters, compelling villains… and a heaping dose of magic.