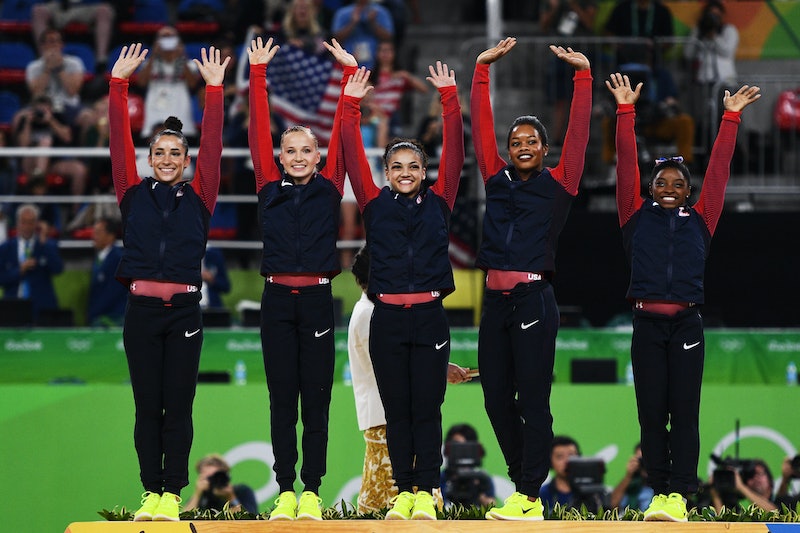 Admittedly, it might be a little too soon to be thinking about the Final Five gymnasts' post-Olympics plans — after all, the athletes still have many events left to win in Rio — but with 2008 gold medalists Nastia Liukin and Shawn Johnson lending their Olympic gymnast insight as sports commentators at the games this year, it's something that's been on my mind. Don't get me wrong: I am all about what Aly Raisman, Simone Biles, Gabby Douglas, Laurie Hernandez, and Madison Kocian have already achieved in Rio and what they will hopefully go on to achieve during these games. But at the same time, with the so-tiny-it's-almost-miniscule average age range of female Olympic gymnasts, there's all-too-often a small window of time that comes with being an Olympic gymnast, and our faves are in it right now. What's next for the Final Five after Rio?

First of all, just because gymnasts like Raisman and Douglas are now in their twenties, this does not necessarily hinder their Olympic dreams. Just look at 41-year-old Oksana Chusovitina (41!), who is the oldest Olympic gymnast ever, in the middle of her seventh Olympic games and currently competing in Rio. And with the incredible athletic prowess from every one of these gymnasts, it stands to reason that they're not dusting off the chalk off of their hands just yet — at least not immediately.

It's safe to say that 4'8" powerhouse Simone Biles, 19, is currently at the top of her game: Biles is widely thought of as one of the greatest gymnasts of all time and is heavily favorited to win the individual all-around gold medal (as well as golds in every other individual event). So it's no surprise that post-Rio, Biles will immediately be inundated with countless offers — I'm going to go ahead and assume everything from reality shows to Lifetime biopics to her face plastered all over the Wheaties box — especially if she wins the coveted individual all-around gold. And as for her gymnastics career, it seems almost impossible that Biles would retire when she is on top of the world and so revered in the gymnastics world. 2020 in Tokyo? Biles would be 23 then, but with her sheer power on the floor, that unprecedented raw talent, and no signs of slowing down any time soon, you better believe that it's an attainable goal.

It's been Biles who has been the talk of Rio, but it's Raisman who is my personal fave (did you see her floor routine on Tuesday?! Unbelievable.) At 22, Raisman is the oldest member of the Final Five, the captain who helped lead her team to victory in the team all-around on Tuesday. The three-time Olympic gold medalist already defied the odds as one of the "older" Olympic gymnasts, so maybe her retirement isn't so inevitable — or so soon.

"When a football player wins a Super Bowl, no one asks them why they come back. When the swimmers win, they don’t ask them," Raisman told Yahoo! Sports ahead of the 2016 Olympics. "With gymnastics they always say it can’t be done but Gabby and I are trying to disprove that."

If Raisman does, in fact, decide to retire as a gymnast — it stands to reason that she'd have a pretty promising Olympic sports analyst career ahead of her, as retired Olympic athletes are wont to do.

Like Raisman, two-time Olympian Gabby Douglas — who won America's hearts as the first African-American woman to win the individual all-around gold in London in 2012 — is one of the older members on her team. But at 20, is Douglas really ready to retire? She certainly wasn't ready to hang up that leo this year. She told Yahoo! Sports in March that after London "I said, 'I don't want to retire.' I felt too young and too fresh to give up gymnastics." Still, after the break from the gym after London four years ago, Douglas — whose life immediately transformed into a whirlwind of press junkets and red carpet events and book deals — said she was grateful for the time away from the mats and the discipline of training. Could Douglas compete again in Tokyo in 2020? It looks like only time will tell — and I imagine that no matter what she decides to do post-Olympics, gymnastics will always be a part of her life, whether that's as a coach or a commentator or a gymnast.

At just 16 years old and already one of the most talked-about gymnasts this year, it stands to reason that New Jersey-born Laurie Hernandez has another Olympics ahead of her. Hernandez will be 20 in Tokyo, and though it will undoubtedly be a tougher competition to even make it onto the 2020 Olympic team — teams will be comprised of four gymnasts; Rio is the final Olympics to have five gymnasts per team — her Olympic dreams look pretty darn achievable, especially after the world (and the judges) could see what she did in Rio.

Kocian is a beast on the bars, winning the World Champion title in the uneven Bars in 2015 and helping her Olympic team propel to victory with her bars routine. According to NBC, Kocian, 19, is committed to attending UCLA in 2016 — after deferring so she could compete in Rio — where she is eligible to compete in collegiate gymnastics. Kocian would be in good company as a Bruin, as 2012 Olympic gymnasts Jordyn Wieber and Kyla Ross are also students there.

Whether the Final Five stick with gymnastics, choose to retire, or any number go on to achieve Olympic greatness once again in 2020, one thing's for sure: They'll always have Rio.