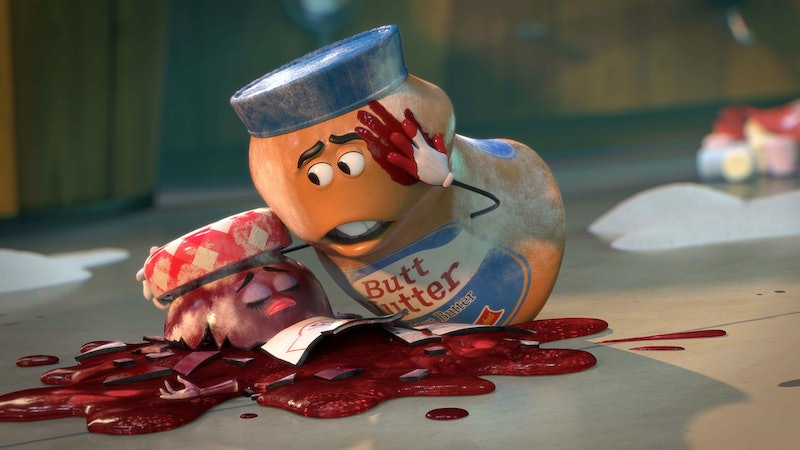 It's hard out here for a parent. When the R-rated and the innocent start to blend, how are they supposed to know the difference? First, Ryan Reynolds stars in Deadpool as a foul-mouthed superhero who looks to any layperson just like Marvel's more wholesome types. Then Columbia Pictures starts promoting Sausage Party , an animated movie designed to resemble its family-oriented counterparts but containing much more adult content. The movie features the voice talents of name comic actors like Kristen Wiig, Jonah Hill, Paul Rudd, and Seth Rogen, who also co-wrote Sausage Party; Disney, Pixar, and Dreamworks have all unleashed similarly grown-up casts on their G and PG-rated material. Sausage Party may remind you of one of those movies, but trust me, it's not a suitable outing for kids. Spread the word; tell every parent and guardian you know: Sausage Party is not a Disney movie. Instead, it's a raunchy animated movie for adults.

When you consider that the movie parodies the look and conventions of an animated family movie, it's easier to see how someone who hasn't looked into Sausage Party much could get confused. Still, your brain has to be pretty pure to let the double entendre of the title and the graphic culinary imagery of its posters go right over your head. Personally, I'll never look at a hot dog sliding into a bun the same way ever again.

Not that the plot is likely to matter as much as the jokes and innuendos in Sausage Party, but here it is: The foods lining the shelves of a grocery store long to be purchased, because they believe that some reward will come to them once a customer picks them up. A hot dog (or sausage) named Frank (Rogen) finds out the dark truth of the matter and tries to warn his kind. Granted, Toy Story 3 also did a mediation on mortality in cartoon form, but it did it without Sausage Party's R-rating.

In truth, Sausage Party was nearly stamped with an NC-17 by the ratings board. In an appearance on Howard Stern's Sirius show, Rogen revealed the tiny detail they had to lose from a "very sexually charged scene" in order to earn an R. Are you ready for this one? A piece of pita bread was stripped of its pubic hair. Watch Rogen explain further in the full clip below. (Keep in mind that there's sexual language used in the video below. And, oh yeah: Do not take your kids to see this movie.)

One group of moviegoers who were forcibly stripped of any belief that Sausage Party is clean, animated fun were the ones sitting in a fateful screening of Finding Dory at a movie theater in Concord, California in June. CNN reports that the preview reel shown before the Pixar sequel included a Sausage Party trailer. Unfortunately, there's no video evidence of every adult in the theater clapping "earmuffs" on their young companions. The theater issued an apology and said, perhaps unnecessarily, that the incident was a mistake.

Audiences who can survive getting carded and are in the mood for vulgar, food-based humor can see Sausage Party when it comes out Aug. 12.